Horsham supporters are a patient and loyal lot, known for their appreciation of good football and unique sense of humour. Some might say, of course, that patience and humour are pre-requisites for following the Hornets but season 1993/94 stretched the patience of two loyal fans to the limit.

Manager John Yems was looking forward to his first full season in charge and claimed that “if it all clicks into place, we’ll have a good season” as he anticipated the months ahead. However, just six wins in forty games saw his side finish rock bottom of the league, some twelve points adrift of second-bottom Flackwell Heath, prompting Yems to walk out on the club before the season’s end. The humiliating spectacle of heavy Sussex cup defeats against Portfield and Langney Sports did nothing for supporters’ spirits and crowds were diminishing. But it wasn’t just on-field failures that upset the supporters, frustrated that their Club had been unable to build on the good work of two years earlier when Horsham had been challenging for promotion and taken Crawley Town to an FA Cup final qualifying round replay.

Lack of funds, and the faint promise of a ground relocation, meant a reluctance to make improvements to the Queen Street ground, leaving supporters with pretty sorrowful surroundings in which to watch their football. The club had no merchandise to sell, no shop to sell it in, and the matchday programme was, arguably, one of the worst in the division. The colourful, professional looking cover contrasted the drab interior that provided very little interest for the outlay of sixty-five pence – one of the costliest programmes in the division.

However, the final straw came after lady chairman, Maureen Smith, publicly labelled sections of the disenchanted Horsham supporters as ‘loudmouths’, following a dismal home defeat against Tring Town that saw supporters verbally abusing their own players.

Pete Tanner and Ben Maher had been following the Hornets since the 1980’s and had become as disillusioned as their peers at the plight of the club that they both loved and realised that drastic measures had to be taken to shake Horsham Football Club from its slumbers. The late 1980’s and early 1990’s had seen the introduction of the so-called supporters’ fanzine – a publication issued by the supporters for the supporters and was particularly prevalent around the professional league circuit although rarely seen at non-league level. These magazines were generally produced at low expense with humour and statistical content in equal measure as an alternative to the glossy club programme that was fast becoming an advertising tool rather than an entertaining read for the football fan. Viewing this medium as the perfect way of getting their message across, Pete and Ben got to work and so it was, on October 2nd, 1993, that Supporters Scene was born.

Introduced at Horsham’s FA Vase tie at Lancing, the first issue was distributed free of charge, such was Tanner’s desire to reach as large an audience as possible. Crudely, yet effectively, constructed the fanzine announced itself as being ‘dedicated to all football supporters who enter the gates at Queen Street and endure 90 mins of consistency that can only be compared to a weather forecast, and pay 65p for a glossy advert booklet with a teamsheet’. Perhaps predictably, the afternoon ended in another miserable defeat at the hands of the County Leaguers, arguably the perfect backdrop against which to launch the fanzine.

Supporters’ Scene began by appealing for investment in a satellite (or satalite in the days before spellcheck became part of our everyday lives!) TV system for the Queen Street clubhouse in a bid to help boost income for the club. An amusing summary of the previous weekend’s trip to Cheshunt made for light-hearted reading and Maher’s knowledge of the non-league scene was evident in his excellent summaries of the Diadora League. Add to that a statistical page, a profile of popular first team player Andy Wright and travel details for Horsham’s forthcoming fixtures and we had a publication fit to rival the official club programmes generally offered at Horsham’s level. Of course, it was never Pete and Ben’s intention to produce a rival to that put out by Hornets programme editor Maurice Shevlin, more their way of making club officials pay attention to what they felt the supporters really wanted.

And, boy, did they pay attention! Shevlin took exception to what he interpreted as a personal attack on him and quit the club and Tanner was subjected to a series of public humiliations by club officials with both he and Maher threatened with bans.

Many a man would have thrown up his arms in despair at the insular reaction adopted by the Horsham officials but not Tanner and Maher. Taking the comments on their collective chins, they set to work on Issue Two, encouraged by the favourable response of their fellow supporters. However, things were already beginning to change behind the scenes at Queen Street with a new programme editor, Adam Hammond, appointed and Alan Russell tasked with re-establishing the club shop. Maureen Smith had read the fanzine, that had even been given column inches in the West Sussex County Times, and sensibly taken notice of what it was trying to achieve.

November’s edition was rolled out for the visit of the division’s surprise package, Feltham & Hounslow, and, having waited impatiently for this second issue, supporters were only too keen to part with their cash this time. At fifty pence, it represented an appealing alternative to the regular, yet vastly improved, matchday publication. Once again, Maher had provided an in-depth look around the Diadora League as well as delving into the news stories from around the non-league pyramid. There was the rarity of a report on a Horsham victory, against Leighton Town, a profile of Paul Harris and an account of Tanner’s exhaustive efforts to get to Lancing in time for October’s FA Vase tie. There was even a ‘Critics Corner’ in which the duo reviewed the standard of programmes for Horsham’s October fixtures in which Portfield came out bottom with a paltry one out of ten and Lancing top with an excellent nine. Adam Hammond’s own efforts were given a middle of the road five. Oh well, from little acorns….. 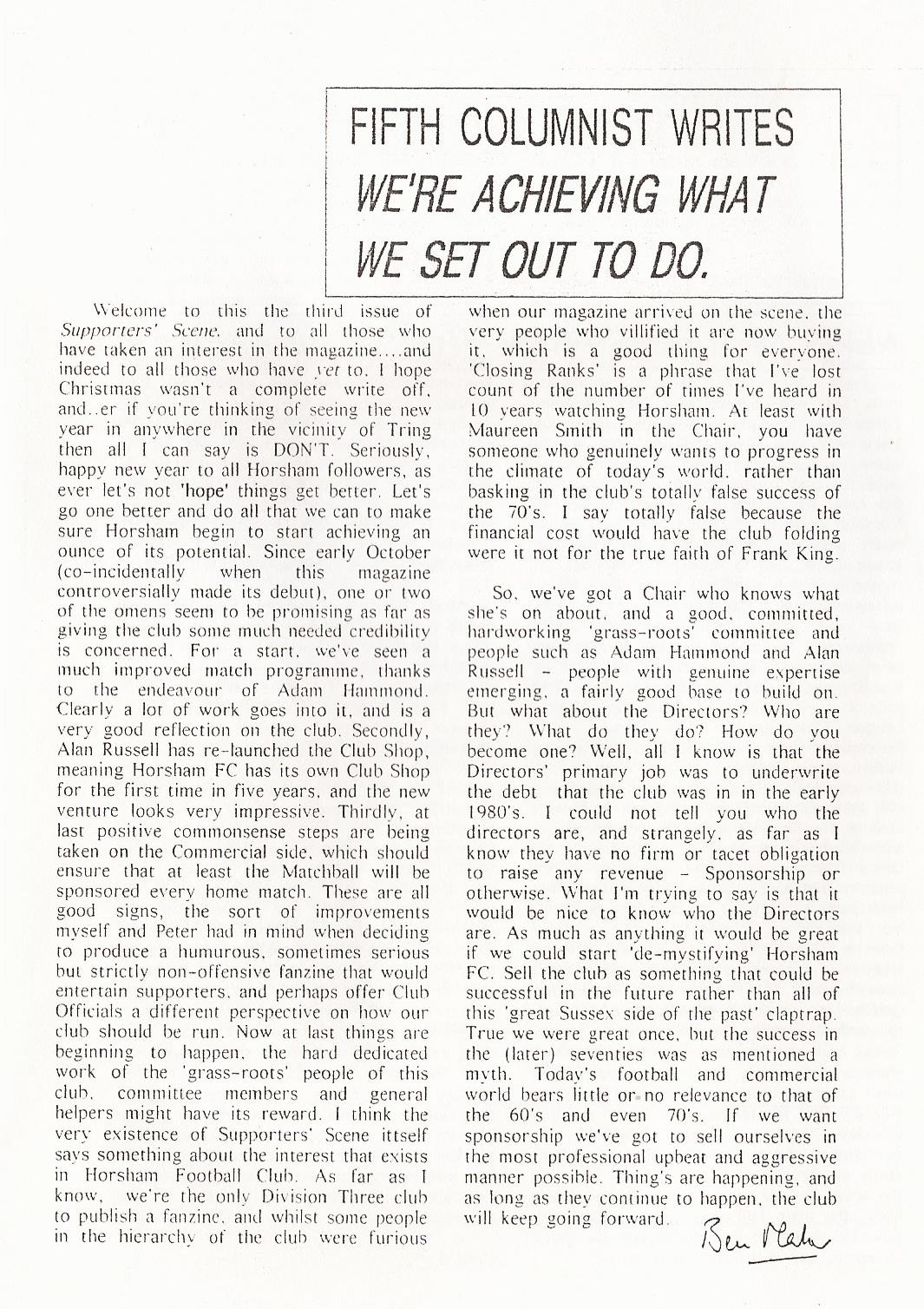 Tanner and Maher were encouraged by the progress being made off the pitch yet even they would have been amazed at the surprising turn of events that saw Tanner invited to serve on the club’s committee. At long last, the Horsham officials realised the benefit of having a representation of the club’s supporters involved in the future of Horsham Football Club.

Although now ‘on the inside looking out’, Tanner continued to assist Maher in producing the fanzine and December’s issue was adorned with a seasonal image in which Father Christmas was seen to be reading a wish list from John Yems. Items covered in this festive edition saw the lads examine the pros and cons of joining the County League (a frequent subject of conversation with a number of supporters at the time), a look around the Sussex football scene and an appraisal of promising defender Micky Ndah. The campaign for a satellite system at Queen Street continued unabated although the only progress seemed to be that the spelling had now improved! Supporters Scene also echoed Hammond’s passionate appeal for fans and local businesses to aid Horsham through sponsorship. At the beginning of December, the match programme listed a mere six entries against players’ kit sponsorship, four of those coming from club officials, and matchball sponsorship was virtually unheard of. Maher also suggested, under the pseudonym of ‘Fifth Columnist’, that the Football Club’s directors make themselves known in an attempt to ‘demystify’ the Club.

By the time the fourth and final issue was produced, in February 1994, Tanner’s position at the Club had meant that his involvement with Supporters Scene would be limited to just a brief opening statement in which he gave thanks to those that had supported the magazine before handing over sole responsibility to his partner in crime. Maher, who had had to increase the cover price to cope with the costs of printing more issues such was the growing popularity of the fanzine, went on to produce a bumper forty page edition packed full of facts and figures, a mid-season review of Diadora Division Three, and, amongst other items, features on the new club shop and the Hornets’ long-serving defender Mark Chaplin. It was an impressive way to bow out with the fanzine carrying more reading content than many non-league programmes of even this modern era.

Sadly, Horsham ended the season with a sixteen match winless run that left them rooted firmly to the bottom of the entire Diadora League yet player sponsorship had increased, the now excellent match programme contained the names of many local firms who wished to become associated with the town’s premier club and the club shop had raised enough money to help finance the purchase of a satellite TV system for the clubhouse. Maher and Tanner would have been proud! And so should we all at the way in which two supporters took it upon themselves to undertake a personal campaign to bring Horsham Football Club into the twentieth century.