Horsham won through to their first Senior Cup semi-final for eleven years but were made to work hard by a Saltdean United side that dominated the second half, fighting back from two goals down but ultimately unable to find a leveller against a home team that played for half an hour with only ten men.

With forty-nine minutes on the clock, the Hornets looked in control when Harvey Sparks added to Eddie Dsane’s first half opener. But a goal by former Hornet Kieron Pamment, and the dismissal of Will Miles for a second caution, left Dom Di Paola’s side hanging on for their first victory of 2022.

With Chris Sessegnon still nursing a shoulder injury, the full-back was one of three changes to the side that began Saturday’s 2-2 draw at Bognor along with Doug Tuck and Shamir Fenelon, the latter two dropping to the bench with Tom Day, Charlie Harris and Tom Richards promoted into the starting eleven.

The Tigers, joint leaders of the Southern Combination League, were nicely rested for the tie having had no weekend fixture and made just the one enforced change from the side that defeated Eastbourne United in the RUR Cup last time out, with Dean Stewart-Hunter coming in for the cup-tied Darren Budd.

The opening ten minutes produced little of note from either side, although the visitors settled in nicely to the task in hand, moving the ball around neatly and with a confidence you’d expect of a side challenging for the title. But then a loose pass by Harry Shooman gifted a chance to Lee Harding but the winger’s shot lacked the punch to beat James Broadbent in the Tigers goal. Next it was Jack Brivio who was uncharacteristically sloppy, as his underhit pass to Will Miles was intercepted by Ryan Warwick and only a timely intervention by Miles saved his skipper’s blushes.

Back up the other end we went and Tom Kavanagh got right under an effort that cleared the goal by some distance and, just a minute later, Charlie Harris suffered a similar fate with an ambitious strike that, although closer than his team-mate’s, was still too high to trouble Broadbent. Harris was at the hub of Horsham’s next attack when he drilled a sublime, inch-perfect, diagonal pass that put Richards in behind the full-back only to see his angled drive partially blocked by the ‘keeper and turned against the far post.

From the sublime to verging on the ridiculous, Dsane then set up Harding for the scrappiest of scrappy shots that was kept out by Broadbent with a low stop. But there was no doubt that the Hornets were in the ascendancy at this stage and they went close again when Richards raced away down the left and sent the ball towards the near post where Harding sidefooted a volley wide. Richards was catching the eye and when he dispossessed former Horsham captain Joe Shelley, he deserved better than to see his shot blocked by a defender.

So, too, did a driven cross by Tom Day at the end of a fine move involving Dsane and Harris, but no-one in an amber shirt could get a touch as the ball fizzed across the face of goal. Miles then opted to go it alone, chancing his luck from thirty yards with a low, well-struck, shot that Broadbent was fully behind.

But the Saltdean defence could only hold out for so long and, sure enough, the deadlock was broken on twenty-eight minutes. Again Richards was involved, this time playing the ball inside to Kavangh whose delightful instant pass to Harding was rolled into the path of the in-form Dsane to score his fifth goal in six starts.

Rather than having the wind taken out of their sails, Saltdean looked to hit back almost immediately when Callum Saunders chased a ball over the top and got there slightly ahead of Brivio only to get wiped out by Miles as he cut inside. The Horsham man received a booking for his indiscretion and although Saunders let him off by striking the free-kick meekly into the defensive wall, the caution would later prove costly for the centre-half.

Another loose pass, the third by Brivio in quick succession, was collected by Warwick but again the captain’s blushes were spared by Warwick overhitting his pass to Saunders and the ball rolled harmlessly behind for a goal kick. Warwick did get his bearings right for the Tigers’ next chance, when his chipped ball cleared the Hornets rearguard and saw Saunders run through unchallenged, only fractionally missing out on getting a toe to the ball that would surely have threatened to draw the sides level.

The half ended bang on forty-five minutes, leading to justifiably heated complaints by the Saltdean players as they looked to go in on terms as they prepared to take a corner.

Horsham continued to play on the front foot at the start of the second half and, just a couple of minutes after Miles’ near-precision pass took a crucial touch off a defender to prevent Richards from getting away, they doubled their lead. This time Miles played a much simpler ball, touching it off to Harris whose wonderful sliderule pass in behind the defender found Harvey Sparks making one of his trademark runs into the box and the full-back drove the ball just inside Broadbent’s near post to make it 2-0.

There were comical scenes, just two minutes later, when Marcus Allen almost made it 3-0. Dsane’s pass was meant for Rob O’Toole but Allen raced in to leather the ball with some venom towards his own ‘keeper, who showed remarkable reactions to prevent it from ripping into the back of the net from eight yards out.

The chances kept coming Horsham’s way. A great run and cross by Richards was nodded back by Harding at the back post and O’Toole’s first time effort was blocked on the line by Shelley. Then, when a corner was only cleared to the edge of the Tigers’ penalty area, Miles swivelled and smashed in a fine low shot that was matched by Broadbent’s agile save.

But, from seemingly in a state of complete control, Horsham were pegged back out of nothing when a free-kick dropped over the heads of Day and Miles and left Pamment in the clear. A fine first touch and composed finish into the bottom corner and, suddenly, it was game on.

The two goal margin could have been almost immediately restored when a pacy run by Dsane ended with an inviting pass for Kavanagh, but his strike was blocked by the hard-working Saltdean defence. The home goal had a fortunate escape as the Tigers failed to convert three openings in a matter of seconds. Matt Astle sent Pamment away down the Saltdean right and his low pass was just missed by substitute Luca Bish at full stretch. Then, as the ball was recovered and played back into the box, Bish was narrowly off target with a header that, instead of troubling Howes, fell kindly for Pamment whose blistering shot was deflected over for a corner.

Saltdean were beginning to turn the screw and they were given a helping hand on sixty-three minutes when Harris lost possession on the edge of the Tigers’ penalty area and Saunders quickly released the nippy Bish who was brought down by Miles, earning the defender an early bath. There were more concerns for Di Paola when, from the resulting free-kick, Howes punched clear but O’Toole fell heavily after appearing to collide with his own ‘keeper and required a good few minutes’ treatment before carrying on.

In the aftermath of the sending-off, Harding was withdrawn in favour of Steve Metcalf as Di Paola chose to sacrifice his attacking options by bolstering his defence, but this merely invited Saltdean to press on and it needed a timely intervention by Brivio to break up another threatening attack by the visitors before a shot by Warwick cleared the crossbar.

But Horsham really should have spared themselves a nervy last quarter of an hour when Dsane’s pass released Richards and when he accelerated away from his marker and pulled the ball back into Dsane’s stride, the striker’s shot struck a covering defender and was cleared.

The was another scare at the other end when a seemingly harmless shot by Tom Caplin, that was heading wide, took a heavy deflection that diverted it towards goal where the alert Howes was switched on enough to get his body behind the ball.

Into the final ten minutes now and a slick Saltdean passing move opened up the Horsham defence once more as Warwick’s pass to Caplin was turned instantly on to Saunders and a number of visiting fans were ready to acclaim a goal as the captain’s well-struck shot whistled just wide of Howes’ left hand post.

With the visitors battling impressively to the end, there was another heart-in-mouth moment for the home fans in the final minute when a cross by Astle looped beyond Howes before dropping onto the roof of the net. The Hornets looked to eat up time with a series of throw-ins that kept the ball around the Saltdean corner flag but there was still time – a minute over the five added on, in fact – for Saltdean to launch one final attack. A terrific cross by Pamment was a striker’s dream but Bish couldn’t quite keep his effort down, the ball scraping the top off the crossbar, and that was that.

Cup competitions are just about getting the result, said Di Paola in his programme notes, and that’s what he got. But his side were given an almighty scare by a Saltdean side who, on this display, should have little problem in holding their own should they earn promotion to the Isthmian League next season. 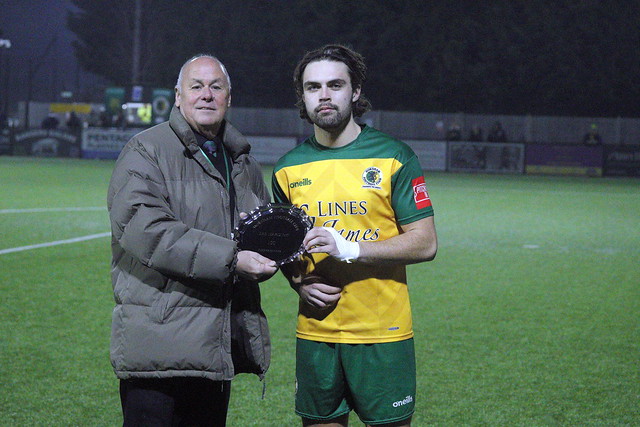