Tom Kavanagh kept Horsham’s FA Cup dreams alive with a late equaliser as the Hornets’ patched up team held league leaders Kingstonian to a draw on a testing afternoon at King George’s Field.

It was a monumental effort by Dom Di Paola’s side to remain in the competition, having started the match without Rob O’Toole, Shamir Fenelon, Chris Smith, Tom Day, Will Miles, Lucas Rodrigues, Luke Robinson and Chris Smith and who would later see Alex Malins and sub Gary Charman succumb to injuries, but no less than they deserved for a dogged never-say-die attitude exemplified by their magnificent travelling support.

The shortage of options meant that Di Paola had to give Alex Laing only his second start of the season, while substitutes Eddie Dsane and Steve Metcalf had not kicked a ball in anger since September and October 2020 respectively. Up front, Charlie Harris was handed the number ten shirt while the versatile Jack Brivio was playing at number nine.

Despite being in apparent disarray, the Hornets began this Emirates 2nd qualifying round tie brightly, with Kavanagh bringing a comfortable save out of Rob Tolfrey after just four minutes. But Nyren Clunis was providing a threat for the Ks and twice in quick succession he sent dangerous balls into the Horsham goalmouth, the most threatening of which had to be fisted away in the nick of time by Sam Howes.

A determined run by Jason Banton threatened to unlock the Horsham defence on fourteen minutes when he skipped past three challenges before sending a left foot shot wide of Howes’ goal and Harris did likewise, from a swift pass by Laing, after the ball was given away cheaply outside the Kingstonian penalty area.

The Ks went close on twenty-four minutes when Banton sipped the ball inside the full-back for Bryant Akono Bilongo to send in a near post cross that resulted in Banton’s shot being blocked and cleared. And then a good turn of pace by Rhys Murrell-Williamson saw him get the better of Harvey Sparks and send in a low ball that Howes had to block for a corner. The Hornets had been forced to defend both attacks while down to ten men, following an injury to Malins, and when a break in play followed, the visitors were finally permitted to send on Charman in place of his stricken team-mate to make his record-breaking 615th appearance for the club, to tremendous applause from the Horsham support among a 371 strong crowd.

Horsham were distinctly, yet perhaps understandably, second best throughout the first half and their frustrations came to the fore when Kavanagh sliced an opportunistic effort well wide, just five minutes before the break. Akon Bilongo was enjoying plenty of the ball – and space – down the Kingstonian left during the first period but he spoilt a decent opening when sending in a deep cross that was just too far ahead of Clunis at the far post.

It was stoppage time before the Hornets forced their first corner of the game but, no sooner had the set-piece failed to clear the first man, referee Peter Lowe’s whistle called time on a goalless first half.

Di Paola made a tactical switch at half-time, with Metcalf replacing Harris, and the experienced full-back was almost instantly involved in the action when part of a triumvirate of blue-shirted players – along with Tom Richards and Lee Harding – leading to Metcalf sending a cross into the box from which Laing went down under Tolfrey’s challenge. As play was allowed to continue, a Horsham corner was cleared as far as Laing, whose first time effort was parried away by Tolfrey and then flicked off the feet of Lee Harding in the nick of time by the Ks’ record-breaking goalkeeper.

It was a positive start to the half by Horsham, that continued when Laing cut in to try his luck from distance with a strike that was too close to Tolfrey. Seconds later, Richards got to the goal-line and crossed for Harding, whose header struck the hand of Ks’ skipper Simon Cooper – in the minds of some Horsham supporters at least – but play was waved on and the danger was quickly averted.

But no sooner had Horsham begun to impose themselves on the game than they fell behind. A corner from the Kingstonian right dropped into a masse of players inside a packed penalty area, from which Mr Lowe spotted a handball by a Horsham player and Banton converted from the spot.

A flare-up between Akono Bilongo and Brivio saw both players receive yellow cards and the visitors’ frustrations were compounded when Charman was forced to withdraw to injury on sixty-seven minutes. However his replacement, Eddie Dsane, would add zip to the visitors’ forward line. But it was Kingstonian who threatened to score next when Murrell-Williamson won the foot race with Harvey Sparks and crossed to the far post where Clunis headed high and wide.

There were hopeful, and unjust, cries for a penalty from behind the goal when Cooper got a timely toe in to put the ball behind after Brivio’s clipped ball into the box looked to pick out Dsane and, from the corner, Brivio put his header straight into Tolfrey’s hands. A loose ball from Kavanagh gave Cooper the opening to send in a decent long range effort that just cleared Howes’ goal but, just as the game looked to be drifting out of Horsham’s reach, a misplaced pass by Akono Bilongo gifted the ball to Kavanagh who produced a stunning left-footed finish to send the visiting fans into raptures behind Tolfrey’s goal.

D’sane had a chance in the closing moments to heap further misery on his former club when twisting and turning away from two defenders before stinging the goalkeeper’s palms with an angled drive, but with neither side able to find a telling breathrough in the minutes that remained, it’s back to the Camping World Community Stadium we go on Tuesday night (kick-off 7:45pm). 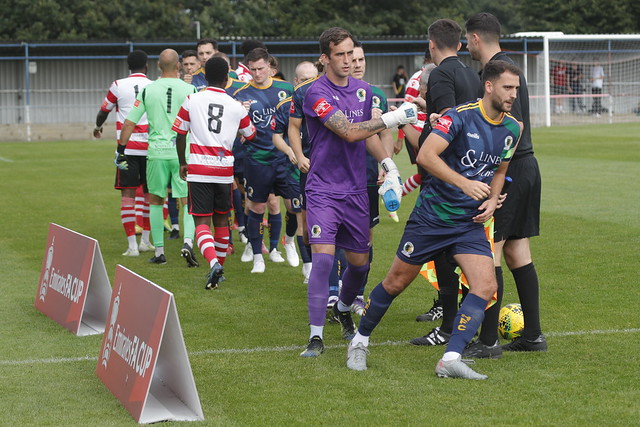