Horsham made hard work of beating Margate at the Camping World Community Stadium in conditions made tricky by a bitter northerly wind, but beat them they did, even though they left it awful late.

A fourth successive league victory was secured by goals from Rob O’Toole and a last-gasp Lucas Rodrigues winner, after Harrison Hatfull had given the visitors the lead against the run of play. While the Hornets had much the better of the possession and chances, a lack of precision in the final third almost cost them dear.

With injury victim Shamir Fenelon absent and Charlie Hester-Cook paying the penalty for two yellow cards in the win at Leatherhead the previous Saturday, O’Toole and Rodrigues were the beneficiaries of the vacancies created in the starting line-up. Tom Kavanagh, Will Miles and Steve Metcalf all made welcome returns to the substitutes’ roster, with Leon Moore the man to make way.

For Margate, manager Jay Saunders resisted the temptation to shake things up too much following the home defeat against Bogner Regis Town in their last match, making just two changes, both in defence.

Ryan Palmer took the place of Ben Swift, with Veron Nzinga, signed on the morning of the match, going straight into the XI in place of Joe Anderson. If the starters were largely the same, the bench was almost entirely new, with only Calvin Ekpiteta retaining his place.

Any concern that Hornets fans might have had over a player called Hatfull in the line-up was tempered by the fact that he had yet to open his account this season. As it turned out, that moment would not be long in coming.

On a grey day brightened by as garish a colour clash as the colour spectrum can produce, both sides showed good early intent. Martial Godo tricked his way to the by-line for the dayglo pink-clad visitors, but his excellent cross found no takers, while the Yellow and Greens forced three successive half-chances and a couple of corners that promised good things to come.

Charlie Harris, as ever, was prepared to try his luck from distance, but Montel Agyemang had done his homework and charged down the shot.

Without Fenelon as their main threat, the Hornets adopted a fluid forward formation, with Lee Harding as the central striker being the only fixture. Around him, O’Toole, Rodrigues and Eddie Dsane darted into space as and where they could find it, in Horsham’s approximation of total football.

It was more like watching the Netherlands of the 1970s than Peru, even if the scansion doesn’t work quite as well.

Rodrigues in particular was keen to take the game to the opposition, carrying on from his impressive substitute appearance at Carshalton.

Whether shooting, crossing or dribbling, the winger looked the most likely source, but it was from a header that he had his best opportunity after being picked out by Harding’s inch-perfect delivery.

Perhaps distracted by O’Toole’s leap just in front of him, the Brazilian failed to make any meaningful contact and the chance went begging.

There were plenty more opportunities for the home side, who were using the ball a great deal better than the visitors. First, the hard-working Harding worked a neat opening with O’Toole, but his effort lacked the power to trouble Ben Bridle-Card in goal for the Gate.

Then, a superb switch of play by Harris deserved a good cross from Harvey Sparks – and got it. The full-back’s delivery found Dsane, who played a brief game of keepy-uppy on his own, but lost his footing as he spun to shoot.

O’Toole had no such problem moments later, when his fierce drive brought out the very best of Bridle-Card. The subsequent corner was recycled to Harris, who fired in a goalbound shot that took enough of a deflection to carry it to safety.

After that flurry of chances, the intensity dropped as the interval approached, but the feeling persisted that the Hornets were not far from taking full control.

The break did nothing to change the pattern of play, with Horsham looking after the ball the better, at least until reaching the business end of the pitch. At that point, the absence of Fenelon was keenly felt.

At the other end, Vance Bola was gifted a chance when Harris was caught in possession, but Danny Dudley got his teammate out of the cart with an outstanding block.

Buoyed by their first real sight of goal, Gate began to show a modicum of belief, forcing a corner from which Hatfull caused an undeterred Sam Howes to make a routine catch.

Back came the Hornets, but Dsane and Harris both shot high and a couple of set pieces committed the cardinal sin of not clearing the first man.

The failure to turn dominance into goals came back to haunt the Hornets in the 65th minute. Dsane conceded possession under little pressure, allowing Margate to work the ball wide to Godo, who again showed his skill in beating Chris Sessegnon and crossing for Hatfull to open the scoring.

The goal prompted Dom Di Paola into two changes in quick succession, with Harris and Dsane making way for Kavanagh and Tom Richards.

Richards almost made an immediate impact, picking out the run of Rodrigues at the far post, but his effort at full stretch fell inches wide of the target.

Just as the game looked to be fizzling out, Jack Brivio lit the blue touchpaper with an intervention of the highest class. Bursting forward from his defensive berth, the skipper exchanged passes with Harding in a very congested area, before sliding a perfect assist to the feet of O’Toole, who despatched a crisp finish into the bottom corner.

It was a reminder of what the team has been missing when Brivio is not in the midfield, well as he has performed as an emergency centre back for much of the season.

Determined not to come away empty-handed from a match they clearly should have won, the Hornets picked up two almost identical bookings – for Harding and Rodrigues – as they prevented Hatfull from bringing the ball clear.

Taking one for the team (or two, in this case) has never been more valuable. With half of the four added minutes played, Richards was given time to line up a cross, which is always a dangerous thing for a defence to allow to happen.

The delivery into no-man’s land between goalkeeper and defence caused panic as Bridle-Card fumbled. O’Toole and Harding both tried to force the loose ball home, but it was to the tireless Rodrigues that the honour of scoring the winner fell.

A wise man once said that the table doesn’t lie, but it could be that it was telling a teeny porky-pie when the Hornets were bottom of the pile after 11 matches and with a hatful of matches in hand. How high up the table they can climb remains to be seen, but one thing is for sure – this is not a relegation team. 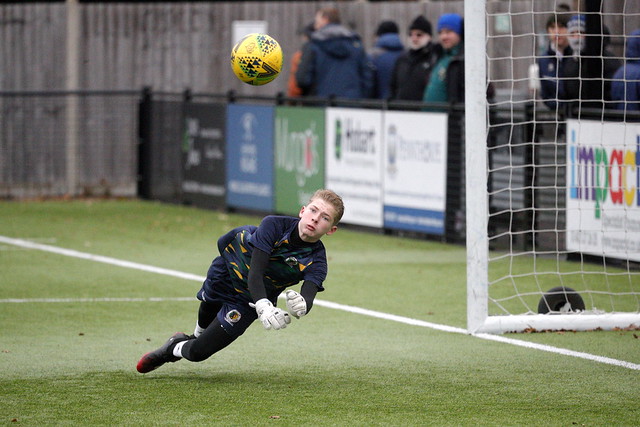 One thought on “Margate (H) – ISTHMIAN-LEAGUE-PREMIER-DIVISION”