From the elation of Saturday’s extraordinary victory, the Hornets were brought crashing down to earth with a sixth league defeat in nine games, courtesy of Cheshunt.

Perhaps still nursing an FA Cup hangover, Horsham never quite clicked into gear with an array of loose passes, poor touches, and little creative spark. A classic by no means and in stark contrast to their impressive performance at the weekend.

The Hornets got out the blocks quickly as a surge forward inside the first minute saw Rodrigues swing and miss a tempting cross from the right. Tom Day then had a chance from a corner but couldn’t wrap his head round the whipped-in ball.

Former Hornet Zack Newton tormented the backline all night and it looked as if he’d open the scoring when Day stepped out erroneously, leaving a gaping hole in the final third for Newton to capitalise.

Dinking over Sam Howes, the winger was ready to celebrate only for Will Miles to appear out of nowhere and hook heroically off the line.

Neat passing play down the right ended in Richards’ cross turning into a shot as it sailed over the bar before a poor clearance from Day landed straight to Newton who dragged the shot wide.

The visitors’ Zubayr Boadi did well to keep the ball in play before laying a pass on to Taylor Miles who aimed a skimming shot straight at Howes.

Appeals for a penalty from the home side were waved away after O’Toole looked to be brought down in the box.

Day then went down following a clearance causing a short stoppage in which Saturday’s Man of the Match received treatment before eventually being hauled off for Danny Dudley ten minutes before half-time.

Shortly before the break, the hosts looked to grab the lead as O’Toole’s excellent reverse pass almost found Rodrigues but brave goalkeeping from George Marsh deflected the ball wide as the two collided.

Amadou Kassarate then tried his luck from distance but his effort flew well over before the referee brought an end to the half.

After such a flat first half, the game needed an injection of excitement, any kind of chance to get the crowd purring.

And it was the away side who provided it as quickfire passing round the edge of the Horsham area unlocked the defence only for the offside flag to spare the Hornets’ blushes.

A McKenzie header then dropped fortuitously in O’Toole’s direction but the striker was unable to keep it under his control.

As the search for the opener gathered pace, the game became more end to end, and it took some great goalkeeping from Howes to charge out and close down Joe Re’s one-on-one strike.

O’Toole found himself caught offside for a third time, when attempting to latch onto Laing’s dissecting pass before Howes was called into action yet again, on the hour mark, tipping a double deflection, first off Dudley, then Reece Beckles-Richards, over the bar.

But Howes could do little from preventing the opening goal a minute later when a pinpoint ball over the top reached Newton who flashed a first time cross to Beckles-Richards which the front man smashed in at the near post.

And Harris almost made an instant impact, marauding forward and skipping clear of two challenges before being suddenly halted by a brilliant sliding tackle by Crowther.

Cheshunt’s resolute defending one of the night’s main themes but the Ambers were undone by Doug Tuck’s pass in behind to Eddie Dsane.

Dsane managed to turn Enock Ekongo with some wizardry but blasted his effort straight at Marsh.

The Hornets were growing tired, and it wouldn’t take too long before Cheshunt put the game to bed.

A miscued touch from Kavanagh fell to substitute Nodibek Bobomurodov who slammed home cleanly to double his side’s advantage.

Richards free kick was fashionably cleared as the Hornets tried to stage an unlikely comeback but Howes was forced into reducing the arrears even further, producing a sensational double save to first deny Mo Camara, and then Newton.

Tuck volleyed wide in the final seconds but it was not to be for Di Paola’s side, as they continue to suffer from their league form, something which must be drastically improved before they start finding themselves cut adrift. 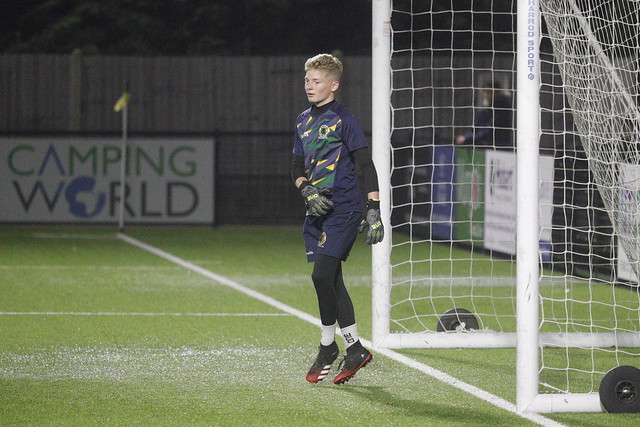 Match Highlights from Your Instant Replay: