Horsham fans’ seven-month long wait to see their side win was ended in spectacular fashion yesterday as the Hornets thrashed Lancing 6-1 on a glorious afternoon at The Camping World Community Stadium.

Harvey Sparks slammed the home side in front after just five minutes before the lead was doubled thanks to a bizarre own goal from the visitors’ Tariq Brown.

Just after the half hour, Kane Louis pulled one back, but Shamir Fenelon restored the two-goal cushion just before the break, aided by some suspect goalkeeping.

Rob O’Toole made it four on the hour mark and Lee Harding made it five, just five minutes later, smashing in after fantastic build up play from a triallist.

The Lancers’ misery was compounded in the 73rd minute as youth player C Gibson finished off another brilliant attacking move to score his first senior goal for the club.

A week after being outplayed and outfought by League Two Crawley Town, the Hornets were able to quickly put that defeat behind them and inflict a thrashing of their own, hitting Lancing for six in a dominant display.

Recently promoted to the Isthmian League Division One South East, after an FA restructure of the non-league pyramid, Lancing were perhaps unfortunate to come up against a Horsham side with something to prove following last week’s humbling.

Wearing our brand-new away kit for the first time, the Hornets started on the front foot as Charlie Harris pounced upon a mistake from Harrison Parker before seeing his cross cut out by a defender.

But it wouldn’t take long until Horsham opened the scoring. Picking the ball up in Lancing’s half, Sparks strode forward unchallenged and arrowed a strike into the bottom corner, just beyond the reach of Mitch Bromage.

Harding quickly got into his trademark rhythm, bombing down the right wing on numerous occasions but it was Fenelon who came closest next.

Winning a robust challenge in the centre, Tom Kavanagh slid the ball into O’Toole, who clipped it through to Fenelon, but the pacey attacker was denied by a well-timed sliding tackle from Parker.

Three minutes later, and the Hornets burst through the visitors’ backline once again. A well-worked passing move between O’Toole, Fenelon, and Harding eventually saw the latter fire into O’Toole but the cross came to him by surprise and his last-second stretch lacked the conviction to test the keeper.

Despite dominating the opening exchanges, Horsham were given a helping hand when the visitors’ Brown totally misjudged Bromage’s position, rolling a back pass into this own net to give Di Paola’s side a two-goal advantage.

Harding then shaved the crossbar with a belting strike, but it was Lancing who would get themselves on the scoresheet next.

After dispossessing Harris in the centre, the ball was played out wide and, with Horsham backpedalling, a pinpoint cross was delivered to the back post where Louis tucked a composed finish past Sam Howes.

However, Horsham’s two-goal lead was restored just before half time as Fenelon’s blasted effort slipped through the keeper’s fingers, spinning rather fortunately as it bounced over the line.

With the Hornets looking comfortable, Fenelon and Harris were provided with some extra rest, as they were replaced for the second half by Jack Brivio and a triallist.

The hosts picked up where they left off from the restart, and another change on the hour mark, with Doug Tuck coming off for Brad Wilson, appeared to spark even more life into them, as they soon added a fourth.

Carried forward by Harding, the ball was recycled out wide to Tom Day, whose first-time delivery was put on a plate for O’Toole who smashed in on the line.

Parker came closest for the away side, soon after, with a cross-cum-shot which just cleared the bar, but ultimately Howes remained untested.

Confident in possession, and the result all but a formality, the home side were given the freedom to express themselves a little more, and it was a triallist who put on the most eye-catching audition.

Bamboozling his marker with some quick feet and expert ball control, he tricked his way into the box before fizzing a cross into Harding who smashed into the bottom corner to extend Horsham’s lead even further.

That was to be Harding’s last piece of action, as he and Danny Dudley, who was making his first pre-season appearance, were replaced by two young triallists in the 70th minute.

After such a dazzling performance, the trialling winger deserved a goal, and he came close when O’Toole hoisted a cross up to the back post, but the unnamed forward was unable to convert.

But it was Gibson who got the loudest cheer of the day as the youngster, who has been part of the Horsham FC youth section since he was 12 years old, finally got his moment in the sun.

Latching onto a superb pass from Brivio, he charged into space before dispatching a lovely finish past the keeper to round off a comfortable first win of this pre-season campaign.

The Hornets will look to follow up yesterday’s more-than-encouraging performance on Tuesday night as they travel to Burgess Hill Town (7.30pm k/o).

And we are back at Hop Oast next Saturday, playing host to Metropolitan Police. Tickets will be available on the gate, but you can purchase yours in advance, online. 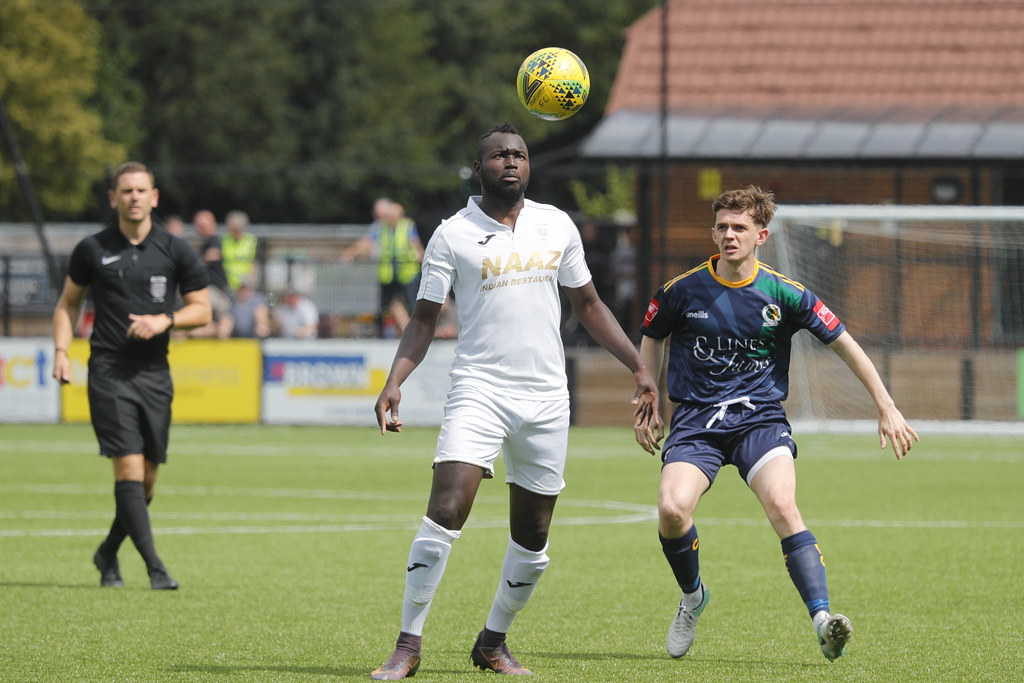