For the second year running, Horsham were dumped out of the FA Trophy at the first hurdle, this time exiting the competition on penalties after a 1-1 stalemate against Welwyn Garden City.

With the game played on Halloween, Horsham’s overall performance was eerily disappointing, despite the positive start in which The Hornets took the lead in the first half via Chris Smith’s diving header. But their half time lead was merely to lure Horsham fans into a false sense of security, as during the second half, Welwyn Garden City’s George Ironton scored a frighteningly good ‘ghoul’ after the guests had put Horsham on the back foot.

But while Horsham did look more likely to find a decider late on, it took a penalty shootout to decide the outcome, with Arron Hopkinson missing his spot kick, while The Citizens scored all five of their attempts wrapped up nicely by Patrick Akwasi who sent the visitors into the next round.

The Southern League Central side have enjoyed a meteoric rise up through the non-league pyramid in recent years and were at Horsham to show why. Having already dumped out Haywards Heath Town in the previous round, a return trip to Sussex against supposedly tougher opposition didn’t bother them, and they made a statement of intent in the seventh minute when Robbie Buchanan swung in a low free-kick from out wide that struck the base of the post.

Just before the quarter-hour mark, visiting skipper Jesse Walkin collected from 30 yards out, spotted goalkeeper Bradley House off his line and went for an audacious chip that was caught by the Hornets number one who adjusted his feet to gather.

Despite the sluggish start, Horsham scored the first goal with their first effort on target. A ball out towards Tom Day was swept into the box with a cracking cross, and in dived Chris Smith to plant the ball into the onion bag beyond Charlie Crowley in goal for the visitors.

Looking for a second, Doug Tuck – making his long-awaited return from injury – swung in a free-kick that appeared destined for the top left corner, but Ryan Doherty saw it all the way on the back post and headed out for a corner. Charlie Harris then struck a low, well hit, effort that needed to be saved low down by Crowley.

A decent run from Robbie Buchanan in Horsham’s own half threatened to unlock the Hornets, the midfielder smashing a shot at goal that forced a decent save from House and, just before the interval, The Citizens threatened again when Carl Mensah sent in a reverse cross that Thomas Opoku flicked up and over with his back to goal.

Horsham began the second half in sloppy fashion, as City began to sense a way back into the game. Jack Vasey struck a weak shot at House with the outside of his boot, while the danger signs once again should have woken up Horsham when Dylan Merchant almost turned the ball into his own net when he deflected out a low ball from Buchanan that just tricked beyond the post.

Citizens substitute George Ironton then drew a superb save from House after he outfoxed Dylan Merchant and shot low down, but House dropped to the ground and put out a strong hand to deny him.

With Welwyn Garden City really ramping up the pressure, Merchant pulled off a brilliant last-ditch challenge on Vasey before the striker could pull the trigger, but the guests scored a well-deserved equaliser on 68 minutes. And what a goal it was, as Ironton sidestepped his marker and smashed home a piledriver that he rifled into the top right corner.

Horsham nearly shot themselves in the foot four minutes later, when House got caught dawdling on the ball by Jordan Kinoshi who stole in to dispossess him, but the Hornets ‘keeper was fortunate that the substitute’s touch took the ball away from goal, allowing Horsham’s rearguard to race back and shut him out before House could be embarrassed.

With time running out, Horsham upped their urgency as they aimed to avoid the lottery of a penalty shoot-out. Arron Hopkinson delivered a cross that caught Crowley in No Man’s Land, but with the ball hitting the bar and bouncing back out to Lee Harding, the winger could not apply the finish, stretching out to hit a limp volley upwards as Crowley recovered to gather the follow-up.

A decent ball was then played ahead of Harvey Sparks to dash onto, and he played a low centre into the six-yard box that was narrowly missed by Kieran Monlouis who slid in as the ball fizzed past.

With no extra-time, the match went straight to penalties, with Welwyn Garden City progressing thanks to their perfectly taken five spot kicks, after Arron Hopkinson had seen his effort saved by Crowley.

Next up for Horsham is a home tie in the Isthmian Premier Division against Corinthian-Casuals on Tuesday evening. 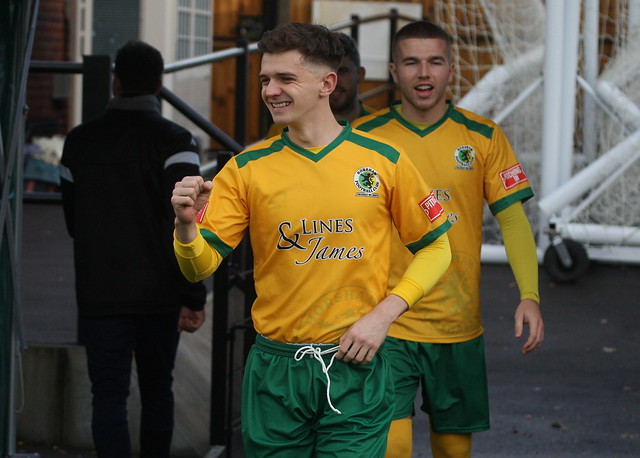