Eddie D’Sane’s double was enough to secure Horsham’s passage through to the 2nd Qualifying round of the Emirate’s FA Cup as Horsham’s first home game off the 2020/21 season got off to a flyer.

D’Sane lashed in from a tight angle early on, before doubling the lead from the penalty spot midway through the first half to put Horsham in control at half time after Dom Di Paola’s side had played superbly during the first half. Yet Horsham’s plan to manage the remainder of the game was made all the more difficult, when referee Tristan Greaves booked full-back Harvey Sparks twice in as many minutes, forcing Horsham to see out the remainder of the game with ten men.

It was a decision that incensed the Horsham supporters and management, with Sparks feeling hard done by for both yellows, but despite the set back and eventually conceding to Gus Sow’s strike late on, The Hornets managed to hold out to ensure their name goes in the hat for Friday’s draw.

Having conceded within two minutes in their opening game away at Leatherhead on Saturday, Horsham were keen to start the game positively and take advantage of a side still reeling from a 5-1 thrashing away at Cray Wanderers. With just three minutes on the clock, a super diagonal ball out towards Lee Harding allowed the pacy winger to send in a first-time low cross, but The K’s cleared and dealt with the resulting corner comfortably enough.

Three minutes later, Harding was again found on the right flank with a raking pass, this time he took a touch and ran with the ball, sending in a dangerous low cross that sailed through the mix, with Rob O’Toole unable to reach.

The K’s failed to heed both warnings, and on 13 minutes, Horsham broke the deadlock. Kieran Monlouis picked up the ball inside Kingstonian’s half, drove forward and managed to release D’Sane with a clever pass, and the striker fired it home across the face of goal from a tight angle with an exquisite finish.

Looking to hit back, The Ks delivered a dangerous corner that required goalkeeper Bradley House to make a save from, and as Horsham cleared, an appeal for handball went up from the visiting players and supporters, but Mr. Greaves rightly waved the protests away.

However the official would soon end up pointing to the spot at the other end of the pitch moments later when hitman Rob O’ Toole was bundled over chasing down a ball that appeared to be running out of play. There didn’t appear to be a lot in the challenge, but it was enough for Mr. Greaves to award Horsham their first penalty of the season, and up stepped D’Sane who nonchalantly converted the spot kick, sending former Horsham shot-stopper Rob Tolfrey the wrong way.

Horsham seemed to be in control, but with the half-hour mark approaching, nearly allowed Kingstonian to half the deficit. A good pass slipped in Kadell Daniel who found space between the defence, but the striker failed to keep it on target, earning Horsham a reprieve as he smacked wide.

Harding once again attempted to provide another chance to Horsham’s strike force, again charging down the wing with a powerful run, evading a sliding challenge and getting into another dangerous position, but once more, his low cross failed to be met as he overcooked it.

The Hornets began the second half brightly. A fantastic bit of skill to flick the ball to Monlouis resulted in the midfielder skipping past a defender and working his way to just inside the box, but lacking killer instinct, his scuffed shot was hit straight into a defender who promptly cleared.

Horsham’s game plan was then dealt a severe blow within two crazy minutes as former Bognor Regis Town man Harvey Sparks was issued a first caution for giving the ball a slight tap after he was pulled up for a foul. Sparks was then drawn into committing another foul moments later, but despite the offense being soft, Mr. Greaves was in no mood to show leniency and promptly issued him a second yellow and sent him off.

Kingstonian supporters took the opportunity to gloat as Horsham felt hard done by, but perhaps the most pivotable moment of the match came just before the hour mark when House pulled off a world class save from a flicked header to keep the score at 2-0.

Some further questionable decisions from referee Mr. Geaves then threatened to spoil the game further as he became card happy, booking Jack Brivo and Will Miles both for questionable reasons, as Horsham supporters became more exasperated and nervous.

With the final ten minutes of the game remaining, a fierce shot from K’s substitute Andre Coker was smashed well over when he should have done better to keep it on target but with four minutes of normal time left, Kingstonian finally pulled a goal back to add to the nerves of the home fans as Gus Sow managed to hold off Lewis Taylor and squeeze in a low angled side footed finish.

Horsham supporters then had to endure seven minutes of added on time at the death before they could finally breath easy as The Hornets saw out the game to go into Friday’s draw. 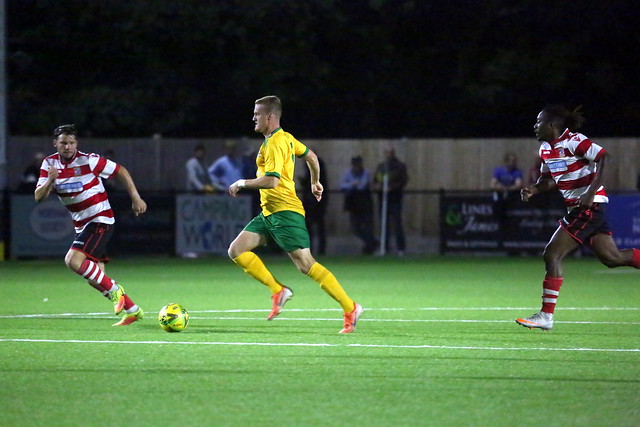 One thought on “Kingstonian (H) – FAC1Q”