It was honours even for Dom Di Paola’s side as The Hornets finally lifted the curtain on their 2020/21 season away at local rivals Leatherhead in a thoroughly entertaining 1-1 draw at Fetcham Grove.

Usually, the opening day of a new season are occasions chock full of anticipation, excitement and speculation what will happen in the coming months. But these are uncertain times, with the shadow of Coronavirus hanging over everyone, and whether or not this season will complete, on time or otherwise will no doubt remain a spectre with last season being declared null and void as the country – indeed most of the world – went into a lockdown to control the spread of the virus.

Not that anyone seemed particularly bothered by what is – for now at least – a new norm of socially distanced football off the pitch as 540 fans flocked to see a wonderful advert for non-league football. This was definitely a treat for football fans who had not seen competitive football since March.

Both sides had been paired against each other for the second successive season, with The Tanners earning a 1-1 draw in our first league game at The Camping World Community Stadium in last season’s opening fixture. Again, just as had occurred over a year ago, Leatherhead struck early on, but were unable to add to their lead and after being allowed to remain in the game, Horsham finally hit a deserved equaliser late on with both sides worthy of a draw.

In fact, it was a dream start for the hosts, who took the lead with just 70 seconds played. A simplistic pass teed up Misha Djemaili who collected 25 yards out, and he adjusted his body to rifle in a wonder strike on his first touch that goalkeeper George Bentley could do nothing about.

Horsham sought an immediate response, with Kieran Lavery heading towards goal from Doug Tuck’s corner, but it forced a good save from home goalkeeper Zaki Oualah who clawed it away.

Leatherhead however should have gone 2-0 moments later as the Surrey club showed some impressive play going forward, Stefan Brown’s cross was drifted over into the box where Joe Leslie ghosted in behind the defender, but he nodded directly at Bentley who stood firm to parry away from close range.

Again, The Tanners came forward in what was a breathless first ten minutes, this time Will Seager swept in a cross from the right flank, and Horsham got lucky as striker Great Evans failed to meet the target as he sent his diving header wide.

Having managed to stem Leatherhead’s attack, Horsham began to grow into the game, as they began to put The Tanners under some pressure around the final third, but Di Paola’s side struggled to utilise their options as Oualah went untested.

Leatherhead continued to look the more threatening though, as they had a couple more chances to double their lead before half time. First, a clever ball realised Charlie Hester-Cook inside the area, but with the angle tight, the midfielder could only slide a weak effort along the ground that Bentley gobbled up comfortably.

A better chance then went to waste when Jack Currie should have capitalised on a mistake inside the box as he collected and looked odds-on to score, but instead her placed his shot into the side netting to let Horsham off the hook.

After falling behind so quickly in the first half, Horsham nearly conceded again within the first 30 seconds of the second as they failed to concentrate. This time, Hester-Cook was allowed to get a shot away inside the penalty area, as he fired across the face of Bentley aiming for the far corner, but Horsham’s No. 1 showed excellent athleticism to dive and push the ball clear of the post.

At the other end, Lavery successfully stepped past his marker to work his way into a dangerous position, with just Oualah to beat, but from a tight angle he could only stab the ball straight into the body of the Leatherhead shot-stopper.

By now, Horsham appeared to have a bit more impetus, and perhaps the best chance the visiters had fashioned came when substitute Kieran Monlouis’ snatched shot on the turn was helped on towards goal by Lavery, finally forcing Oualah into a good save who pushed the ball over the bar.

Lavery made way for new signing, and former Leatherhead striker Eddie Dsane, who immediately won a corner for his new club, and on 70 minutes, Dsane showed why Di Paola brought him to Horsham as he held up the ball well and played a clever defence splitting pass but Will Miles – finding himself in an unfamiliar position, could only hit a less than convincing shot along the turf that Oualah smothered.

But Horsham finally made the breakthrough with ten minutes remaining. The goal coming from a set piece from Doug Tuck’s corner. It was flicked on by Rob O’Toole and nodded into the back of the net by Jack Brivio

The goal set up a tense final ten minutes for both sets of fans, with both sides then going on to have excellent chances to seal the victory. Dsane showed great skill to dribble around the edge of the box and hold of the challenge to fire low, his shot taking deflection and earning Horsham a corner that The Tanners cleared away.

Two minutes later, Leatherhead went agonisingly close when Great Evans managed to stretch Horsham’s defence open, but his effort struck the base of the post and bounced out in front of the goal mouth, as Horsham hooked clear the danger.

Harvey Sparks could have then won it for Horsham when he hit a low half volley heading for the bottom corner, Oualah saw it late, but produced a great save to tip away and then from the resulting corner, Chris Smith had a wonderful chance but he leant backwards and blasted narrowly over the bar as a pulsating game concluded with the draw the right result.

Horsham will have a triple header of home fixtures to look forward to, starting with Kingstonian in the Emirates FA Cup 1st Qualifying Round on Tuesday night, before entertaining Cheshunt next weekend in the league. 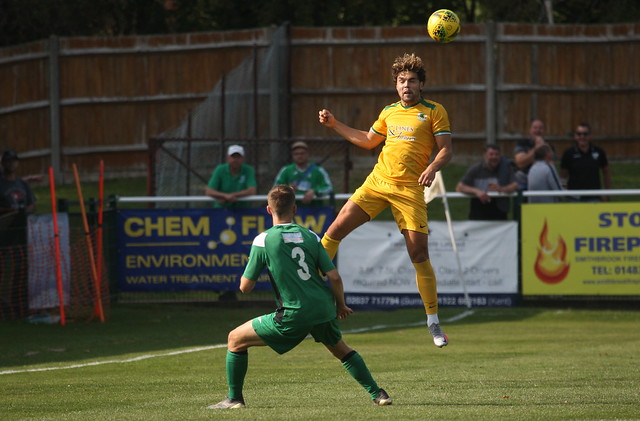 2 thoughts on “Leatherhead (A) – ISTHMIAN-LEAGUE-PREMIER-DIVISION”