A sensational second-half hat-trick from Charlie Harris earned the Hornets their first league win of the season with a dominant display against Enfield Town on Tuesday night.

Chris Smith blasted in the opener for the hosts inside ten minutes, with Horsham looking comfortable for the majority of the first half.

However, a lapse in concentration a minute before the break saw Enfield score a quickfire double against the run of play.

Harvey Sparks levelled it up just nine minutes after the restart before Harris fired in a hat-trick of the highest quality to secure our first Isthmian Premier win of the season.

Enfield Town made their first trip to The Camping World Community Stadium having enjoyed a full week’s rest since their last outing, after their scheduled weekend game against Kingstonian was postponed due to the weather.

Contrast that with Horsham, who, only 48 hours earlier, were being dumped out of the Emirates FA Cup to division-higher Havant & Waterlooville.

And with a squad already ravaged by injuries, with up to five key players on the sidelines, you would have excused some players for showing signs of fatigue.

However, this was not the case as Dom Di Paola’s side put in a thoroughly dominant display.

The Hornets raced into an early lead when a superb defence-splitting pass from Tom Day was latched on to by Smith who blasted a strike past Towners ‘keeper Nathan McDonald to open the scoring.

Horsham continued to occupy the visitors’ half for much of the opening exchanges as Smith fizzed two low crosses into the box within minutes of each other. The latter, especially, looked the most promising as he successfully got on the end of a hopeful long ball forward before flashing a delivery into Rob O’Toole, but McDonald did well to smother the chance.

Returning from his one-game suspension, Lewis Taylor was another stand-out performer, firing narrowly over before he was involved in more great build-up play shortly after, exchanging some neat passes with Reece Hall. Hall slipped a pass wide to JJ O’Sullivan but the full-back’s cross was turned away thanks to an acrobatic leap from McDonald.

The Hornets continued to press for a second as a sharp cross from Sparks was cut out by a defender before it was Taylor’s turn to send in a searching delivery on the opposite flank, but that too was turned wide. From the resulting corner, an unmarked Will Miles had a powerful header cleared off the line before the away side forged their first proper chance of the game.

Percy Kiangebeni confidently shrugged off Hall when challenging for a header but his long-distance effort was caught calmly by Brad House.

Enfield were starting to grow more into the game, as evidenced by David Ray’s last-ditch challenge to deny Billy Bricknell a shot on goal, while three minutes later, down at the other end, a Harris free-kick whistled past the post.

But with less than a minute before half-time, Enfield stunned the Hornets, striking twice before the break.

Jon Muleba made the most of the space afforded to him before lofting a pinpoint cross into Sam Youngs who finished superbly from close range. From the kick-off, the visitors quickly regained possession and were awarded a free-kick. Swung in by Lyle Della-Verde, the set-piece found an unchallenged Bricknell, who nodded a strong header past House.

Forced to regroup, the Hornets continued to press forward at the same intensity shown in the first half, and it wasn’t long until the hosts found their equaliser.

A sweet combination of passes down the left between Hall and Sparks saw the latter Sparks finished off a lovely move, sweeping Hall’s low drive into the bottom corner.

Horsham were hungry for more and looked to reclaim their lead, with O’Toole coming close in the 67th minute. Smith intercepted a poorly controlled pass from Enfield before setting up O’Toole, but he couldn’t keep his curling effort from rising over the bar.

Winning the ball in his own half, Day burst forward at pace and passed across to Taylor, before it was laid off to Harris who unleashed a low 25-yard drive past the helpless McDonald.

A training ground free-kick routine didn’t quite work out for Enfield as an overhit pass from Ryan Blackman to Della-Verde forced the winger further wide than he would have liked, as his cross sailed out of play.

Substitute Junior Mubiayi almost levelled things up once more as he sent a clever backwards flick towards goal, but House was equal to it, reacting quickly to save at his near post.

With five minutes remaining, Horsham extended their advantage as Harris raced onto an O’Toole through-ball, before firing in a super finish from a tight-angle.

And the midfielder wasn’t done yet. As the clock ticked over into injury time, Harris tried his luck from distance once again, rattling an effort in off the post to cap off an excellent Man of the Match performance.

Though the plaudits will rightly go to Harris, the result and performance will offer a great deal of comfort to Di Paola and any supporters concerned by the Hornets slow start, as we look to push on into the rest of the season.

Next up for the Hornets is a trip to Wingate & Finchley this Saturday. Tickets remain on sale for this fixture with supporters offered a discount if they buy them in advance online.

Come and give us your incredible support away from home and join us in making the trip to North London this Saturday. Don’t miss out, get your tickets HERE. 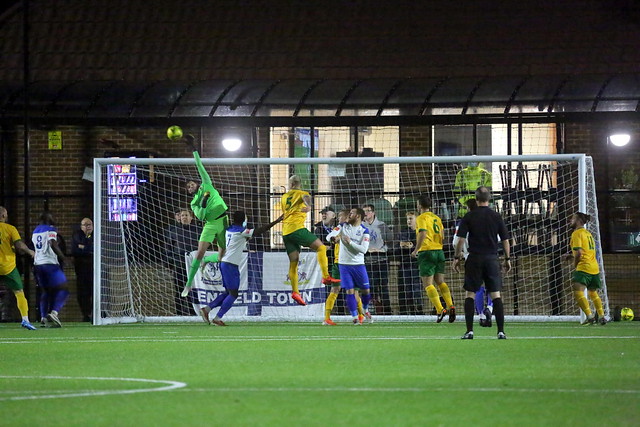