The Hornets will go into the lockdown period in good spirit, having recorded a 2-1 victory over Corinthian-Casuals that lifts them into the top ten for only the second time this season.

In front of another reduced capacity full house at The Camping World Community Stadium, Horsham largely dominated the first half and deservedly went ahead through a blistering strike by Charlie Harris, his seventh of the season, and looked to have taken full control by the midway point of the half when Rob O’Toole finished off a fine team move.

However, as so often has happened this season, the home team seemed content to sit back on their advantage and were made to pay when Robert Jamison pulled a goal back, ten minutes into a second half in which they were second best for large periods.

Dom Di Paola made three changes from the side that started Saturday’s FA Trophy tie with Welwyn Garden City, with Steve Metcalf dropped to the bench, Harvey Sparks unwell and Dylan Merchant given the night off to rest his troublesome groin. Into the side came JJ O’Sullivan, after a four match absence, Lee Harding, and debutant Danny Dudley, a former Casual himself, who joined the club at the weekend from Carshalton Athletic.

Just one point and four places separated the two mid-table teams at the start of play and it was just as well-balanced a start to the match with both sides missing opportunities to put down an early marker. Just a couple of minutes in, Casuals’ Matt O’Donoghue got away down the right and sent in a cross that Jerson Dos Santos glanced wide while, at the other end, an unmarked Will Miles helped on a Harris corner that Chris Smith, who had little time to react, could only put over the crossbar from almost on the goal line. Then, in the Casuals’ next attack, a simple lobbed pass from Lewis Taylor went over the heads of Miles and Dudley to put Dos Santos in the clear but his volley was too close to Brad House, who made a routine save.

Horsham quickly countered and when Smith put Harding clear, the winger raced to the byline from where he cut the ball back low to the near post where it was cut out well by visiting captain, goalkeeper Danny Bracken. Next, a terrific pass from Miles was taken well on the chest by O’Toole, who won a corner from which Miles ought to have done better than glance another free header out for a throw in on the opposite side.

Although a Horsham goal looked on the cards, it took something special to break the deadlock. It came on eleven minutes and began with a lovely piece of play by Kieran Monlouis, whose swivel of the hips left his marker for dead before playing the ball out wide to Harding. As he made a passage for goal, the winger laid the ball inside to Harris who took a touch to create the space before sending in a blistering drive that was still rising when it hit the roof of the net with Bracken left grasping thin air.

Anything you can do, thought Casuals’ Harry Carter just a few moments later as he took sight of goal, but his strike from distance was wayward and elicited the first ‘donkey riding’ chant of the evening from the Horsham faithful as the ball sliced into the rigging high beyond House’s goal. Kieron Cadogan was rather more accurate with his attempt but found House well positioned to make the save, after an effort by Ben Cheklit had been blocked on the edge of the area. Then, as the Hornets failed to clear the danger, Dos Santos smashed the loose ball high and wide.

Despite enjoying the greater possession, the home side were letting themselves down with the odd stray pass and when Doug Tuck conceded possession inside his own half, Dos Santos’ audacious attempt at catching House off his line ended in disappointment for the former Folkestone man as his thirty yard strike failed to reach the required height and was comfortably taken by the retreating ‘keeper.

Only the smart reactions of Bracken prevented Horsham from doubling their advantage when he somehow kept out Tom Day’s near post flick, the defender ghosting in to meet Monlouis’ tremendous curling pass, but the hosts had their second goal just a minute later. Injuries have made it a frustrating start to the season for Harding but he showed signs of his old self in this match, none more so than his run and inch-perfect cross that cut out both ‘keeper and defender, allowing O’Toole to slide in at the far post to maintain his recent run of netting in every other match.

Thereafter the first half became something of a non-event, with the Casuals perhaps keen to make it to half-time without further punishment while the Hornets’ fragile confidence of late perhaps accounted for their reluctance to take too many risks, knowing that one mistake could let their opponents back into the match. In fact it was the visitors who had the only other chance of note before the interval when substitute Bradley Wilson, on for Taylor, put a header over the bar from Cadogan’s corner.

Horsham came quickly out of the blocks at the restart, with a strong run by Man of the Match Monlouis taking him to the corner of the Casuals’ penalty area only for his shot at goal to be blocked by a defender. Harris was out to show that the interval hadn’t dulled his appetite when he cut in from the left, Day stepping out of the way for his team-mate to unleash a low right-footed strike that went inches wide of the post.

Some fine trickery by Harding, tight to the far touchline, saw him beat his marker and send in an inviting cross towards the leaping O’Toole but the big target man was unable to get over the ball and could only send an acrobatic header over the crossbar.

But despite a bright opening by the hosts, it was Casuals who were next to get on the scoresheet when a free-kick was swung in from the right and Jamison rose highest to head the ball into an empty net after House’s ineffective attempt to claim the cross. Thereafter, the complexion of the match changed.

Six minutes later, a poor clearance from the goalkeeper resulted in the ball being lost in midfield and Wilson’s goalbound shot being deflected behind off Miles for a corner. As the set-piece was swung deep towards the far side of the penalty box, it was promptly returned into the dangerzone where Wilson’s close range shot was blocked by a flying body and cleared.

Monlouis tried to alleviate some of the pressure when he embarked upon a good run down the right and although he was unable to pick out O’Toole’s intelligent run, he did manage to lay the ball off to Harris who sliced one wide with his left boot. But the action quickly returned to the other end of the pitch where another free-kick was unnecessarily conceded and swung in dangerously by Cadogan but Jamison, under pressure from Dudley, couldn’t keep his first-time volley down and the ball went harmlessly over the goal.

Bracken was alert to palm the ball away after Harris and Smith had combined well down the Horsham right, Smith doing well to dig out a cross that the Casuals goalkeeper pushed away from danger, but it needed a crucial intervention by O’Sullivan to prevent the visitors from getting on terms with seven minutes to go. When Miles misread a Cheklit cross, the ball fell invitingly for substitute Nathaniel Pinney just eight yards from goal. But, just as he shot, O’Sullivan nipped in in the nick of time to block and the threat was averted.

By now, though, the Hornets were beginning to up the ante and a magnificent crossfield pass from Harris gave Harding the chance to run at two defenders, one of whom got a touch to prevent his shot from troubling Bracken. From the resulting corner, Miles headed the ball down for Arron Hopkinson who, with possibly his first touch since replacing Smith a couple of minutes before, saw his flick on strike a defender with referee Jamaal Horne, who had an excellent game, waving away any penalty appeals.

Harris then fired the ball straight into Bracken’s midrift as the clock ticked down and, in one final attack, a probing pass by Casuals’ Jack Strange was picked up by Cadogan whose well-hit effort was blocked low at his near post by House to ensure the Hornets’ fourth league victory of the campaign. 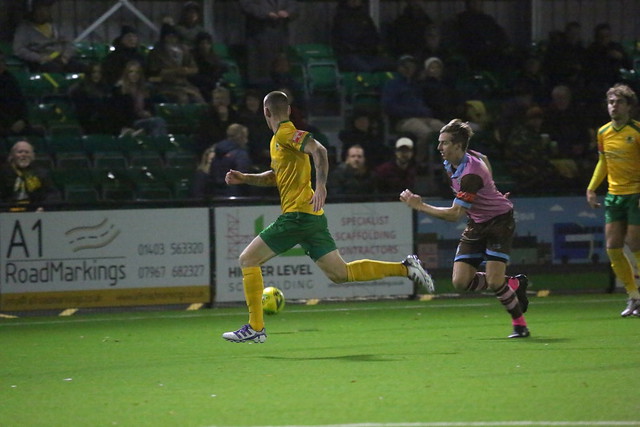