Horsham fell to a disappointing 1-2 defeat at home to Cheshunt, as Dom Di Paola’s side put in a flat display to leave the Hornets still searching for their first win of the league campaign.

Despite putting in an excellent display midweek against Kingstonian to progress in the FA Cup, The Hornets looked lethargic and a long way from a side widely tipped to compete for the play-offs this season. Despite opening the scoring through visiting goalkeeper Shane Gore fumbling Rob O’Toole’s 25th minute header, The Ambers struck back with a powerful strike by Jamie Reynolds seven minutes later. However with neither side looking particularly bright during the second period, Joe Re’s speculative looking shot from range beat Bradley House and dipped just underneath the crossbar to earn the visitors a surprise win.

Understandably, the manner of the defeat left Horsham boss Di Paola looking visibly annoyed at the final whistle. He has assembled a squad with an impressive array of talent, but while there is certainly no need to be concerned so early in the season, he will demand a response from his side against Bognor Regis Town on Tuesday evening.

After a slow start, the visitors had the first chance of note, with former Horsham forward Zack Newton making a good darting run and getting a shot off at the edge of the box, but Will Miles stuck out a leg and ensured it was deflected out for a corner which Horsham then cleared.

Looking to hit Cheshunt on the counter, Horsham played a good pass through to Eddie D’Sane who managed to keep himself onside, as the flag stayed down he zipped in a low ball in towards the goalmouth, but Macsen Fraser did very well to get back to hook the ball clear off the line, with Rob O’Toole rushing in at the back post.

An excellent whipped cross from Harvey Sparks was then sent over into the mixer, but it just evaded the head of Jack Brivio who threw himself at it but couldn’t get up high enough.

Horsham then scored on 25 minutes. Another cross – this time from Brivio – was flicked on by Lee Harding, and with space Rob O’Toole connected with a diving header to direct the ball at goal, Gore should have saved it, but instead he fumbled and the ball tricked into the back of the net as O’Toole registered his first goal of the campaign in less then emphatic fashion.

Cheshunt wouldn’t be behind for very long, as seven minutes later The Ambers drew level. Horsham failed to clear their lines following a corner, and with the loose ball coming out to Jamie Reynolds, the midfielder took his invitation to shoot, smashing in a ferocious thunderbolt with his first touch, with the ball taking a slight deflection on it’s way in beyond House who didn’t even move.

Horsham had a super chance to go in at the break with their lead restored however, but after latching onto a super curved ball out wide, Harvey Sparks’ low cross in to D’Sane was miss-hit, as the new Horsham striker spurned the chance to put The Hornets back in control.

Early on the second half, Cheshunt had a strong shout for a penalty appeal turned down when Ayman Gharbaoui appeared to be bundled over during a goalmouth scramble. Referee Mr. Alex Bradley decided nothing of it, and allowed play to continue as Horsham cleared.

With the game lacking any real spark, chances for both sides quickly dried up, but on the hour mark, Harding worked his way into a good position and squeezed a shot a goal, but it lacked venom as Gore dropped down to gather up comfortably.

A superb block by the solid Adam Crowther prevented D’Sane from putting Horsham back in front when he slid in to block the striker’s effort midway through the half, and it proved vital as with 14 minutes remaining, Cheshunt scored what would be the winner. Joe Re collected the ball in the middle of Horsham’s own half, and before he could be closed down, he cracked a speculative shot from range, spotting House off his line, and his effort dipped beautifully to hit the back of the net, just underneath the crossbar.

D’sane was immediately replaced by Chris Smith and the striker nearly had an immediate impact, side footing his marker and releasing a goal bound shot which Gore tipped away marvellously.

As the game entered injury time, and with Horsham desperately looking to salvage the match, Reece Hall and Gore collided with each other as they both raced for a 50/50 ball, but despite Hall just getting there first and managing to keep the ball in play, he was unable to reach the rebound as he failed to get back on his feet in time.

Horsham’s afternoon misery would then be compounded when Lewis Taylor was shown a red card as The Hornets were reduced to ten men for a second successive match while Cheshunt held on for all three points. 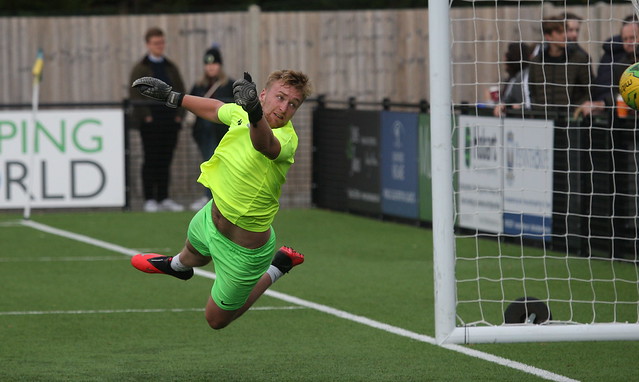 One thought on “Cheshunt (H) – ISTHMIAN-LEAGUE-PREMIER-DIVISION”