Four goals from four individual players secured Horsham their third league victory of the season, as they put in a totally dominant performance to thrash sorry Brightlingsea Regent 4-0 at The Camping World Community Stadium.

After suffering a 3-1 defeat at Carshalton Athletic on Monday evening, Dom Di Paola’s Hornets needed a pick-me-up and produced the perfect response against the struggling Essex outfit who were second best throughout from the moment Tom Day scored a spectacular 18th minute opener. Will Miles then added a second to give Horsham a commanding 2-0 lead at half time, and there were further strikes from Chris Smith and Rob O’Toole who rounded off the afternoon to mark his 100th Horsham appearance with a firm header.

The R’s had good cause to feel aggrieved when Miles was only shown a yellow card for a poor and reckless challenge on Lewis Byrney-Hewitt just after the hour mark, but already dead and buried at 4-0, it wouldn’t have made a difference with Horsham superior than their visitors all over the pitch.

Horsham’s first chance came on six minutes through Reece Hall, who struck a clean shot on the half-volley, but despite good technique, couldn’t keep it on target as the ball bounced wide of the post. Two minutes later, a clever ball wide fed O’Toole, who swung in a cross but with no one inside the box to follow up, visiting goalkeeper Charlie Turner gathered easily.

Horsham made the breakthrough on 18 minutes following a corner. The ball finding its way to Chris Smith who instinctively shot, only for Regent to clear off the line, Tom Day then collected from 20 yards out, rolled onto his left foot, and clipped a beauty that curled into the top corner giving Turner no chance.

Horsham could have had a second within as many minutes, once again a corner wasn’t dealt with by The R’s, a header downwards appeared to be heading wide but landed at the feet of Smith, who smashed towards the roof of the net, only to be cleared on the line by some desperate defending from the guests.

The Hornets came again, unlocking Regent’s defence thanks to a lovely ball through to Smith who broke behind with only Turner to beat, but from the angle, the former South Park man’s strike was bravely parried by Turner, while somehow Jamie Bennett put in a last ditch challenge to hook the ball from danger with O’Toole sliding in as he tried to force in the rebound.

Jack Brivio then nodded over with a looping header but Horsham didn’t need to wait much longer to double their lead when Will Miles capped off a fantastic team goal, after a string of passes eventually found him waiting at the edge of the box, where he squeezed low down into the bottom corner.

The visitors were able to muster up a shot 2 minutes before the interval as the isolated Kris Oti tried his luck from outside the box with an unconvincing effort that was easy enough for Brad House to gather, but they were lucky not to go in further behind when right on the stroke of half time, Dylan Merchant headed just over the bar.

There was no change to the pattern of the second half, with Horsham continuing where they left off, as they effectively killed off the match on 49 minutes. The classic forward partnership of O’Toole and Smith combining as the former fed the latter with a neat forward ball to run onto, Regent’s defence should have done better to snuff out the danger, but Smith continued his run, holding off two defenders and calmly slotting in low down with a composed finish.

Not done yet, Di Paola’s side added a forth as once more Regent showed total inability to deal with corners, this time O’Toole grabbing a deserved goal when he rose to firmly plant his header into the net from Harris’ pin point dead ball delivery.

Threatening to run riot, Horsham let off Brightlingsea Regent when Harris played a short corner to Reece Hall, who played the one-two, but invited to shoot, Harris struck harmlessly over, the chance coming moments after Turner had to be alert to push Day’s cross over the bar as it threatened to creep in and under.

Despite being in such total control, a reckless challenge from Miles saw the defender catch Lewis Byrne-Hywitt as he slid in dangerously on the midfielder. Few would have had any complaints had he been dismissed, but referee Mr. Will Briers was lenient, issuing a yellow card, however Di Paola quickly replaced him anyway sending on Arron Hopkinson in his place, while Byrne-Hewitt was taken off as a precaution to be replaced with Jack Mahon.

Kieran Monlouis’ pass sent Harvey Sparks motoring down the left flank to latch onto the ball where he crossed into the box, Hall collected, and laid the ball off for Brivio, but the Hornets captain held onto the ball for too long, finding himself closed down by the defence.

Unsurprisingly, the final chance of the game once more came to Horsham when substitute Lewis Taylor headed towards goal from a goalmouth scramble, but Turner did well to get a glove on it, turning the ball over the bar.

Horsham take on Essex opposition once more on Tuesday night when we head to East Thurrock, before heading back over the Thames next weekend to Hornchurch. 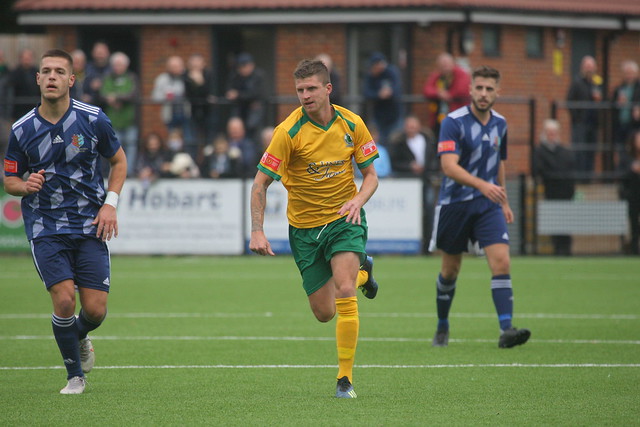