Horsham remain winless in their opening three league fixtures after falling to a successive home defeat, this time to Bognor Regis Town who secured their first league victory of the season thanks to a 0-1 win in which Horsham were unable to find a way through a robust Rocks backline.

In the first Sussex derby of the season, Horsham were much improved from the lacklustre performance they showed in the 1-2 defeat against Cheshunt on Saturday, but Dom Di Paola’s men once again came up short in an entertaining game that was settled by Ashton Leigh’s 53rd minute strike however the Hornets will probably feel that they deserved something from this game as they tried in vain to grab an equaliser late on.

Bognor Regis Town supporters had dubbed this fixture the ‘Gary Charman Derby’ due to the veteran defender’s links with both clubs and the respect he still holds during his stint on the Sussex coast. Charman himself was not named within Horsham’s squad, while former Bognor duo Harvey Sparks and Doug Tuck were also ruled out due to suspension and injury respectively. Hornets boss Di Paola’s plans were also given another setback, when Jack Brivio had to be replaced on the half hour mark due to injury as Horsham appeared to lose their heartbeat.

The visitors started brightly, with full back Tom Cooney warming up the gloves of goalkeeper Bradley House who tipped away a dangerous cross in the third minute, however Horsham immediately went close thanks to a bit of clever play that saw Steve Metcalf cross into the box, only for Rob O’Toole to head over.

Metcalf would later find himself caught out of position when Ashton Leigh was able to break and remain onside, yet the midfielder smashed woefully wide under pressure from defender Will Miles who did well to get back and attempt to put him off.

Rocks full-back Harvey Whyte then made a clearance off the line to deny Horsham going in front, but on 14 minutes, thought they had scored through Jordy Mongoy, who was offside, but referee Mr. Shelby Elson pulled it back for a freekick after Tom Day had been booked for hacking down an opponent during the build-up.

The Rocks were enjoying plenty of space on the left wing, as Cooney exploited the room to send in a deep cross that found it’s way to Whyte, the Bognor captain finding himself in plenty of space, but blasting over.

At the opposite end, Lee Harding flicked a header past the post, and Horsham went close again soon after, when a freekick was drilled low along the turf, across the face of goal but begging as substitute Kieran Lavery couldn’t reach.

With chances for both sides coming thick and fast, Rocks forward Tommy Leigh should have done better when he headed straight at House from six yards out with Horsham failing to challenge him in the air, and a minute later, Bognor should have really broken the deadlock when Mongoy was played through the middle thanks to a decisive pass, yet the striker played a strange shot, attempting to chip House who plucked the ball away from him.

It was Horsham’s turn next, as Lavery collected on the edge of the box, spun around to face goal and blasted over the bar, and with five minutes of the half remaining, a promising looking Horsham break was let down by Lewis Taylor who hit a tame low drive from the left hand side that visiting shot-stopper Amadou Tangara gathered comfortably.

The second half was equally as breathless as the first. Within a minute of the restart, Bognor had a strong penalty shout turned down by the referee when Jack Flannigan appeared to be brought down within the six yard box however the official quickly indicated he saw nothing wrong with the challenge and urged play to continue.

Perhaps unsettled, a mistake at the back from Bognor almost gifted Horsham as Eddie D’Sane looked to take advantage, the former Leatherhead hitman shooting at Tangara’s near post and drawing a save from the Rocks ‘keeper.

The game’s only goal came on 53 minutes, a mazy run from Ashton Leigh carved Horsham’s defence and drew a poor challenge from Miles, who ended up on the turf, as Leigh sidestepped the stricken defender and fired a composed shot past House.

Ashton’s brother Tommy Leigh looked to get himself on the scoresheet firing wide from 25 yards out with a fierce effort on the hour mark, but the final 30 minutes saw the visitors gradually play deeper as Horsham began to look for a leveller.

Much of Horsham’s threat was coming from winger Lee Harding, as he first collected and turned, only to fire over the bar, and then three minutes later, going agonisingly close when he should have finished a well worked move, only to see his goal bound shot take a deflection and go out for a corner.

Horsham’s pressure however was not causing Tangara any real trouble in goal, as he watched a desperate shot from Chris Smith go well over his bar, and with five minutes to go, Smith went on a powerful run and cracked a piledriver just wide.

With Horsham searching for the elusive equaliser, the hosts lumped a long ball up field and looked for the head of O’Toole, who somehow headed over despite being unmarked.

A second strong penalty appeal – this time for Horsham – was again turned down by the referee with a minute of normal time remaining, this time after Smith had drawn a great save from Tangara and in the ensuing aftermath O’Toole was bundled over as he attempted to get to the rebound.

Horsham’s miserable night was then summed up as Tangara ensured all three points would be heading back to Bognor, when he pulled off a massive save right at the death to deny Harding’s well struck shot as The Hornets slump to 18th in the table. 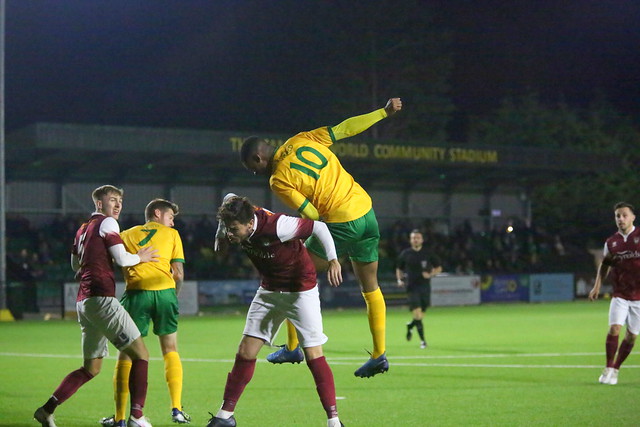