The Hornets should go into next Saturday’s opening league match of the new campaign in good heart, despite suffering a second home defeat in four days.

In what was an entertaining contest against last season’s beaten National League South play-off semi-finalists, Dom Di Paola’s side produced a spirited performance and, but for the width of an upright, might have taken an early lead. Charlie Harris was the man denied when, at the end of a purposeful run that took him from the halfway line to the edge of the Dorking penalty area, his deflected strike came back off Slavomir Huk’s right-hand post with the goalkeeper beaten.

Dorking hit back immediately when Jason Prior, under pressure from former team-mate JJ O’Sullivan, headed a right-wing cross over the bar and then James McShane turned on to a pass from Jimmy Muitt and fired in a shot that was parried away by George Bentley. The game then entered a quiet spell in which both teams cancelled each other out until the midway point of the half when a twisting run by Wes Fogden failed to find the finish, the summer signing’s low effort bringing a comfortable save for Bentley.

A deep cross by Nick Wheeler was headed over at the far post by the stretching Muitt, who quickly became provider once more when his own centre was just too high for Prior, lurking dangerously at the far post. Horsham came close to opening the scoring in rather fortunate fashion when Lee Harding collected a pass from O’Sullivan and raced towards the goal-line, drilling over a tantalising cross that was smashed against Kieran Lavery by a defender, the ball rebounding agonisingly past the post from just six yards out.

The home side went even closer on 39 minutes when David Ray headed Harris’ corner back into the middle where Will Miles’ flicked header was cleared off the line by Fogden. Next it was Jack Brivio’s turn to run at goal but his mishit attempt was gratefully gobbled up by the ‘keeper while, at the other end, Bentley pulled out a superb reaction stop to prevent Fogden’s powerful header from breaking the deadlock.

Harris was unable to apply the finish to an incisive Horsham move, just before the break, when Miles’ sliderule pass was helped on first time by Lavery into his team-mate’s pass but Harris’ rushed shot was sliced horribly wide. Nial McManus ought to have done better than dragging his shot wide of Bentley’s right-hand post, having been given too much space in the penalty area, and the same player blazed another opening over the top under pressure from Harding.

The visitors changed their entire team for the second half and they almost found the net inside the opening 45 seconds. Sam Beard made a good run down the left and chipped the ball in towards the six yard box where Giuseppe Sole brought the ball down instantly, only to be denied by the alert goalkeeping of Bentley, who blocked the shot.

With minutes there was a half chance for Horsham when a curling Harris free-kick somehow eluded everyone inside the Dorking penalty area before drifting out beyond the far post. But it was Bentley who remained the busier of the ‘keepers and he showed strong hands to punch a stinging effort from Sole over the bar after the former Woking man pounced on Ray’s underhit clearance.

But Horsham continued to make a game of it and another O’Sullivan/Harding move saw the latter elect to shoot early, but without the required pace or power to seriously trouble Sam Holes. Lavery then had a sight of goal when, with a sidestep to get away from his marker, he shot straight at Holes from just inside the box.

The game’s decisive moment came on 70 minutes when Miles could only head a clearance into the air, the ball was played back into the dangerzone and when Ed Harris’ attempted overhead kick fell loose for the unmarked Gallagher, the Dorking man brought it down on his chest before firing low beneath the exposed Bentley.

Perhaps it was unsurprising, certainly given the hot conditions, that play fell away after this and a number of questionable challenges created a rather tetchy atmosphere for a while. Three times Gallagher committed fouls that, perhaps in a more competitive situation, might have resulted in a yellow card rather than a verbal admonishment from referee Gerry Heron.

Sole tried to make the most of a misplaced pass by second half sub Kieran Monlouis, but his long rage chip bounced harmlessly wide of the target with Bentley off his line, but the last word very nearly went the way of the hosts when a fine overlapping run and cross by Harvey Sparks saw Gary Charman’s header loop nicely for Holes to claim and the victory was secured. 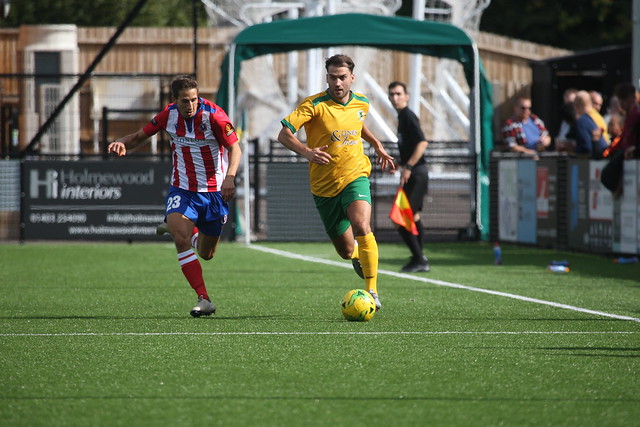