National League South Dartford arrived at The Camping World Community Stadium with two complete teams, both of high quality. Their first-half team was good, their second-half team even better, as they moved up through the gears to dominate Horsham and earn an emphatic 3-1 victory.

Such is the depth of the Darts’ squad that the absence of prolific striker Darren McQueen, the division’s joint Golden Boot winner with 17 goals last season, was hardly felt at all.

The Hornets competed well in the first half, indeed they were the better side for half an hour, and went in at the break with a deserved 1-0 lead through Rob O’Toole. But Dartford struck back early in the second half through Elliott Romain and further goals from the eye-catching Jacob Berkeley-Agyepong and Josh Hill put the game beyond the Hornets who battled manfully until the end.

Horsham started well, keeping possession of the ball despite the high tempo pressing of their opponents, and carved out an early half chance in the 5th minute. A low ball put into the box arrived invitingly for O’Toole but his diving header went just wide. An even better chance fell to the same player, just after, when he was put through on goal by Lee Harding but his outside of the boot strike failed to trouble the visiting ‘keeper Craig King, the only player to complete 90 minutes for the visitors.

The lively O’Toole was not to be denied though and, from a corner kick in the 15th minute, managed to take full advantage of some slack marking to stab the ball home from close range. A good start and 1-0 to Horsham.

Although the home defence was largely untroubled early on, there were clear signs that the Darts were on the ascendancy, and as the game moved past the half hour stage they were beginning to dominate midfield and from this platform started to create chances.

A mazy run and shot from one of their triallists was headed over the bar by defender Tom Day for a corner. From the resulting kick the same triallist nearly scored with a firm header but Horsham were saved by the crossbar and the danger cleared.

The Hornets were working extremely hard but were finding it difficult to retain possession and O’Toole and Reece Hall were becoming increasingly isolated up front. But with both Will Miles and Tom Day looking assured at the back the Hornets were able to get to the break still ahead.

As the teams came out for the second half the unchanged Hornets were facing a completely new team, apart from the goalkeeper. It soon became clear that the ‘Darts had been sharpened’ as they came out of the blocks with a greater intensity, and soon showed that when midfielder Jacob Berkeley-Agyepong unleashed a fierce low shot from nearly 30 yards that George Bentley did well to push round the post for a corner.

On 50 minutes the breakthrough came for the Darts when a lovely pass put Elliott Romain clear on goal if he could beat the onrushing Bentley to the ball. This he did, to finish with a cool chip into the corner of the net to put Dartford on level terms.

The visitors were now controlling possession and showing great movement off the ball, keeping Horsham at full stretch. It was just a matter of time before the Hornets defence was breached again, and this time it was Romain creating the opening for Berkeley-Agyepong, who finished coolly with that exquisite left foot of his, for 2-1.

Just after the hour mark manager Dom Di Paola shuffled the pack, introducing the fresh legs of Chris Smith, JJ O’Sullivan and Kieran Lavery on for Steve Metcalf, Reece Hall and O’Toole. However the Hornets were still on the rack and it was game over in the 67th minute when Josh Hill, lurking at the far post at a corner, hammered in the Darts’ third goal.

Another fine move involving Berkeley-Agyepong, ex Crystal Palace and recently signed from Aldershot, gliding effortlessly through Horsham’s midfield to slip in a triallist who shot, but the increasingly overworked Bentley managed to block.

Further substitutions for Horsham saw Charlie Harris on for Kieran Monlouis and Dave Ray on for Miles. As Dartford went into cruise control, Horsham enjoyed a bit more possession in the last 15 minutes but with no real threat on goal apart from a Harris free-kick, which warmed the hands of the Darts shotstopper, and a great through ball from Doug Tuck that had the Darts defence scrambling across to take the ball off the toe of the advancing Smith.

It was  a tough game for the Hornets, and a step up in class, but they kept going until the final whistle and certainly won’t be the last team well beaten by this impressive Dartford side who are expected to mount a serious challenge for promotion this upcoming season. 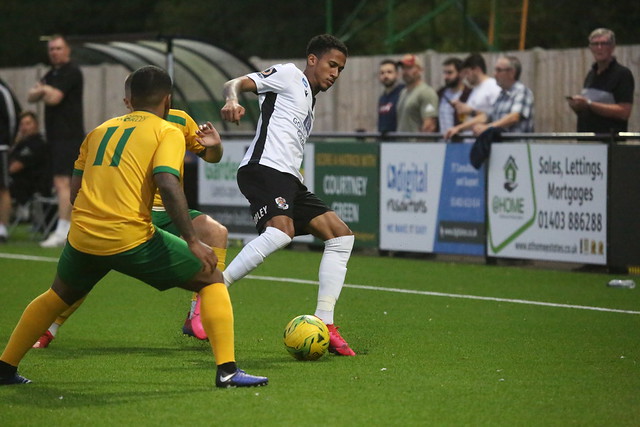