The Hornets made it a successful homecoming when, for the second successive match, they claimed victory in the final minute of a game they dominated for long periods.

The two teams looked on course for a share of the spoils when a thunderous drive by substitute Zidane Akers ripped past George Bentley with just five minutes remaining, making it two goals apiece. But, with the final whistle looming, Harvey Sparks netted his second goal of the game to secure the win that delighted the majority of a crowd that was just grateful to be able to watch live football once again.

Almost six months had passed since spectators last filed through the turnstiles at the Camping World Community Stadium, but with the Club’s volunteers having worked diligently over the summer to implement precautionary procedures against the Covid-19 virus, a reduced capacity was permitted back for this latest pre-season friendly and they were rewarded with an entertaining contest.

Looking resplendent in their new home strip, Dom Di Paola’s side began on the front foot against their Southern League opponents, with Tom Day clipping the top of the crossbar from Doug Tuck’s well-worked corner. Just two minutes later, Borough ‘keeper Daniel Purdue could only watch on helplessly as his headed clearance dropped for Sparks, little more than ten yards inside the visitors’ half, the full-back sending a first time volley over the back-pedalling custodian and into the net for the game’s opening goal.

There was a moment of panic inside the Harrow penalty area when a Jerry O’Sullivan cross deflected into the path of Lee Harding and, as a defender rushed in to challenge, the ball reared up between both opponents and looked set to drop invitingly for the Horsham man until Purdue managed to scramble it away from danger. Horsham came straight back again and only a superb bit of defending by the full-back, who headed the ball over his own crossbar, prevented Rob O’Toole from connecting with Will Miles’ tantalising cross.

Harrow’s first chance came just past the midway point of the half and was spurned by Liam Ferdinand after Frank Keita had set up his team-mate with a neat backheel to the edge of the box, the number nine blazing his shot wastefully over the crossbar.

The Hornets were giving a second outing to their triallist goalkeeper Brad House, having impressed during the midweek win at South Park, and after enjoying a hitherto quiet afternoon he took centre stage on 32 minutes with an unfortunate, if slightly comical, error. Having shown a strong pair of hands to keep out a well struck effort by Lewis Cole, the youngster’s attempt to restart another attack saw him inadvertently throw the ball into the back of his own net for a hugely fortuitous equaliser.

But his blushes were spared just five minutes later when the Hornets regained the initiative. O’Toole had just gone close with a driven cross that looked to have come back off the far post but the ball was quickly recycled by Jack Brivio and laid back to Sparks, who fired it low across the face of goal for O’Toole, unmarked at the far post, to thrash it into the net.

It was nearly 3-1 a couple of minutes later when Tuck found Brivio in acres of space, enabling the skipper to drive towards the edge of the Harrow box and off-load to Harding. The winger shot low and hard towards the far post where it missed the target, and O’Toole’s outstretched leg, by a matter of inches. Ferdinand missed a good chance to level things up again, just before the interval, when the ball dropped invitingly for him on the edge of the Horsham penalty area but he puts his first-time effort over the top.

Horsham made just the one change at the break, with George Bentley donning the goalkeeping gloves for the second half, but the early action centred on the Harrow goal when Kieran Monlouis put Kieran Lavery in the clear only for Purdue to narrow the angle well and push the ball behind for a corner. From the flag kick, Sparks’ cross was headed only as far as O’Toole whose blocked shot led to a melee in the box in which at least two home players attempted to get a shot in before the ball was cleared.

Brendan Matthew went close to putting the visitors on terms when, first, he managed to get away from Miles and fire a shot into the side-netting and then sent another effort too high from the angle. It was a more positive start to the half by Harrow, who had been second best during the opening 45 minutes, and only a goal-saving challenge by Day prevented Ferdinand from converting Matthews’ pass after the home defence had been opened up by the Southern Leaguers.

Yet only the woodwork prevented them from going further behind when Harding’s looping cross-come-shot bounced off the top of the bar. A purposeful run by Monlouis ended with the new signing stinging Purdue’s palms with a fierce shot that went straight at the goalkeeper, and Bentley fared equally as well at the other end when Borough launched an instant counter-attack from which full-back George Moore was denied at the near post by the former Brighton ‘keeper.

The hour mark brought a flurry of substitutions, with Harrow shading the changes by five to Horsham’s four, and before any of the replacements could adapt to the game, Lavery bundled his way into the box to score what should have been the Hornets’ third goal of the game, only to shoot straight at the exposed Purdue from around ten yards out.

The former Hendon goalkeeper was well-placed again to this time deny Charlie Harris, after a tidy exchange of passes with fellow sub Reece Hall, the stopper electing to parry the strike away to safety, and then Harrow went close at the other end when Akers got away down the left and curled a right-footer just beyond the far post. Bentley produced a superb reaction save to turn away a close range flick by Anthony O’Connor with ten minutes to go and, from the clearance, Alex Clark raced on to Day’s pass but just failed to get enough height to his attempted lob that Purdue was able to claim at full stretch.

It looked as if the Hornets were going to get punished for their failure to convert their chances when an unfortunate slip by Hall left Sam Gubbins with a clear run at goal but, having drawn Bentley from his goal before squaring the ball unselfishly towards a team-mate in front of an empty net, David Ray got in a vital touch to divert the ball away.

It was, though, a brief respite for the home side as Akers collected the ball on the corner of the penalty area and fired in a blistering strike that Bentley could barely have seen as it rocketed into the back of the net for a sensational equaliser. Just five minutes remained but, rather than cursing their misfortune at being pegged back after dominating much of the proceedings, Horsham went back on the attack with Lewis Taylor waltzing his way into the Harrow penalty box and getting to the touchline only for his cutback to fall to a Harrow player rather than a team-mate.

That looked to be the end of matters but, with the ninety minutes now up, O’Sullivan put the ball into the box, Lavery’s shot was pushed out by Purdue and the unmarked Sparks had the simplest of tasks to sidefoot the ball into the open goal for a dramatic winner.

So much for the Hornets easing their football-starved supporters back in gently after a frustrating six months!

The only dampener on the afternoon was the news that Tuesday’s opponents, Ramsgate, had pulled out of next Tuesday’s scheduled friendly, leaving the Hornets with a potential night off unless alternative opposition can be found. 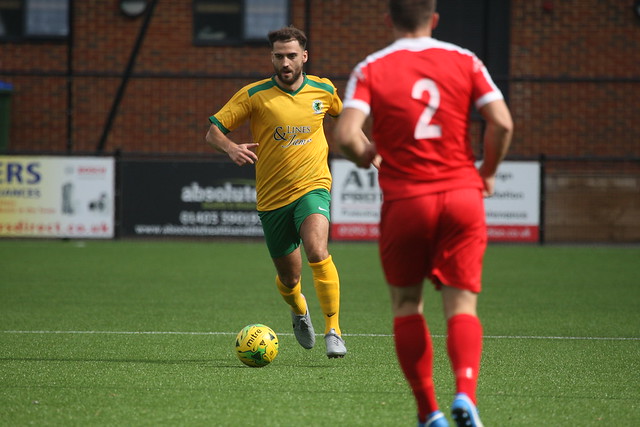