A second half goal from Rob O’Toole was enough to make it three straight wins for Dom Di Paola’s Hornets as their latest, and arguably their toughest, preparation for the new season saw them victorious at Metropolitan Police.

On a day on which spectators were allowed back inside non-league football grounds around the country, O’Toole swooped to provide the simple finish in the 54th minute of a match the visitors controlled thereafter.

Given the soaring temperatures and blazing sunshine that had been a feature of this most bizarre of summers, it was typical that the returning supporters were sent scampering to the grandstand for shelter from a heavy downpour at the start. Perhaps the greasy conditions were to blame after just two minutes when Will Miles, in trying to shepherd the ball out of play, was dispossessed by an opponent who cut it back into the box where Dylan Merchant made a vital block tackle. From the corner, a far post volley was cleared off the goal-line by Lewis Taylor.

It was a lively start by the home side who, throughout this report, are unapologetically unnamed due to the lack of a teamsheet. Having survived that early assault the Hornets threatened a couple of times, predominantly through Alex Clark on the right flank although some nice combination play between Chris Smith and Harvey Sparks opened up the Met defence down the left and, but for a timely interception, Kieran Lavery would have been well-placed to shoot.

George Bentley was well-positioned to keep out a free-kick by the Police number nine, whose set-piece went under the wall, but there was controversy at the other end of the pitch when Lavery clearly had his heels clipped – albeit accidentally – by the Met centre-half, with the referee waving play on as the striker hit the deck inside the penalty area. Then a nice turn of pace by a Horsham triallist took him away from his marker before sliding the ball invitingly for Smith but the ‘keeper was out in the nick of time.

A slip by Miles left the number ten with an apparently clear run of goal but, with the experienced centre-half in retreat and Bentley advancing off his line, the striker’s effort was deflected behind for an unconverted corner. Taylor elected to try his luck from distance, just before the half hour mark, but his powerfully struck shot strayed just wide of the target before an inviting low cross by Lavery was just a toe in front of strike partner Smith.

The Police ‘keeper was called into his first serious save on 35 minutes when Horsham worked the space well for Jack Brivio to sidestep his marker and fire in a shot that needed to be turned over the crossbar. But it needed another last-ditch challenge by Merchant to prevent the hosts from taking the lead when a high ball into the box was headed down towards the far post where Merchant stuck out a leg to deflect the ten’s attempt behind.

As the corner was swung over, Horsham produced a fantastic counter-attack, led by Clark, which took the former Southend United wideman to the edge of the penalty area from where he delivered the perfect pass for Smith whose first-time shot was pushed away by the ‘keeper. As Brivio returned the loose ball into the box, Clark rose highest to head it down, Lavery failed to get a touch and Smith, who turned the ball into the net, was flagged offside.

Encouraged by this latest attempt, the visitors went on the attack again when Clark cut inside and struck a shot that was heading wide until deflecting off a defender for a corner. However, it needed a sharp reaction save by Bentley to prevent the home side from taking an interval lead when, a minute before the break, he got down well to palm away a strike from number eleven that was creeping just inside the post.

As has been his way during pre-season, Di Paola made wholesale changes at the break with seven players replaced, three of whom combined for the game’s only goal. A cross by Jerry O’Sullivan seemed to have set up a goal for the unmarked Lee Harding but, instead, his misdirected header dropped kindly for O’Toole at the opposite post and he gobbled up the simple chance from just a few yards out.

Five minutes later, only the bravery of the Met goalkeeper prevented Horsham’s triallist from crowning an eye-catching performance with a goal, the custodian producing a brave close range block after Harding had lifted Steve Metcalf’s throw into the box. From the resulting corner, the ball was worked to Doug Tuck whose low shot, from the edge of the area, forced an alert stop from the ‘keeper having somehow gone straight through a crowded penalty box.

The home goal had another let off, two minutes later, when a clever pass by Metcalf put Tuck clear on the left side of the box. His low cross was met by O’Toole, whose toe-poked effort came back off the post although the linesman’s raised flag meant a goal would have been ruled out for offside. The Hornets were in the ascendancy and, in a further attack, O’Toole got away down the right and put in an inch-perfect cross for Harding but his volley was pushed round the post by the busy ‘keeper.

A determined run by Horsham’s triallist, one of two players sporting the number ten shirt in the second half along with Charlie Harris, saw him get beyond his marker and into a shooting position but the ball flashed wide of the target. On the left of midfield, the Hornets were giving another ‘unknown’ a chance to force his way into Di Paola’s squad and he brought an uncomfortable stop by the goalkeeper when coming in onto his right foot and trying his luck with an angled drive.

Next to chance his arm was Harris but he too, was denied, this time by the ‘keeper’s legs, having been found by Tuck’s dinked ball over the top, and the home stopper was remained at the forefront of the action when the visitors’ two triallists linked up well for number ten to fire in an effort that was well dealt with by the Met man.

The hosts had barely threatened since the break but their number six put in a decent, if somewhat ambitious, strike from long range that flew wide of Bentley’s left hand post with just over five minutes remaining.  The home side’s number seven went slightly closer with a first time shot, following a good attack down the Horsham left, but the last word very nearly went to Horsham when Harris did well to cut the ball back into the path of Harding. But, just a couple of yards out and with the goal at his mercy, the half-time sub inexplicably blazed the ball over the crossbar with the full-time whistle blown immediately after. 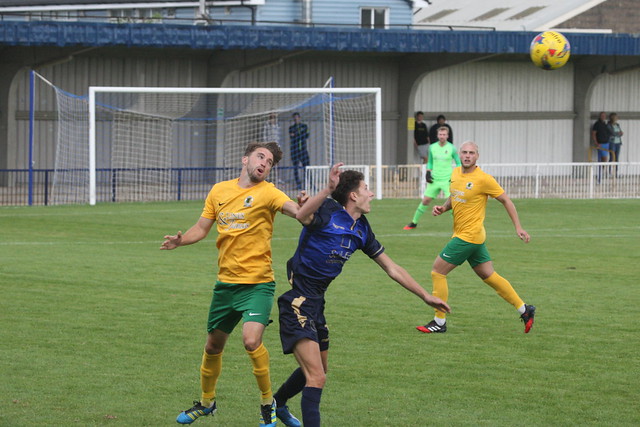