After an unprecedented 158 days enforced break, the Hornets were finally able to return to football action with the first of nine scheduled pre-season friendlies.

Regrettably, due to the strict Covid-19 protocols under which non-league football is currently operating, the game was played behind closed doors.

But, although there were no spectators on the terraces at the pristine looking Camping World Community Stadium, there were plenty of players on the pitch, with both clubs using the fixture as an opportunity to give a run out to as many players as possible, fielding completely fresh teams in each half.

The visitors, Saltdean United, will ply their trade in the Southern Combination Premier Division next season, under the new joint management team of Bryan O’Toole and former Horsham player/manager Anthony Storey.

A comfortable 3-0 win, it was a game the hosts controlled from the moment new signing Tom Day put the Hornets in front in the 16th minute.

Further goals in the second half from Will Miles and Charlie Harris, ensured a comfortable scoreline that reflected Horsham’s superiority.

The Tigers though provided a good run out for Di Paola’s boys and looked, with their many new signings, as though they should be able to improve significantly on last season’s showing in the Southern Combination Premier which saw them languishing third from bottom when the league fixtures were aborted.

The game opened brightly with both sides showing plenty of energy, with the players no doubt appreciating a cool, overcast day in contrast to the extreme heat we’ve experienced over the last fortnight.

The first chance, just four minutes into the game, fell to the Hornets. A clever through ball from debutante Day found a Horsham trialist wide on the left, who showed an impressive turn of pace to beat his defender and deliver into the box, but the advancing Alex Clark was unable to get a decisive touch.

Clark, always available, was seeing quite a lot of the ball at this early stage of the match and went close in the 14th minute, cleverly dribbling past his opponent, but his low shot drifted wide.

The breakthrough came after a clumsy challenge resulted in a free-kick for the Hornets. A perfect lofted delivery into the box saw Day rise highest to convert with a deft header, which he made look much easier than it actually was.

Moments later, the same player almost scored again with another header, in a similar position, but this time the ‘keeper made an easy save.

At the other end, Saltdean had the ball in the net but the referee’s assistant had flagged for what appeared to be a tight offside decision.

The Hornets midfield were now growing into the game, starting to dictate play, and our diminutive new signing Tuck looked very easy on the eye in possession.

Further chances fell to Horsham as a corner found O’Toole completely unmarked, but the striker’s mistimed header failed to trouble the visitors’ keeper.

A shot from Tuck on the edge of the box went wide before a long, mazy run from the visitors’ number 11 ended with a shot on target but George Bentley saved comfortably.

Just before the break, Tuck put in an inviting cross from the right which Joe Shelley nodded over the bar, his pained expression showing he knew he should have done better.

The final action of the half saw O’Toole fire a fierce free-kick on target but the Tigers shot-stopper, by far the busier of the two, pushed the ball out for a corner.

As planned by the managers, two new teams came out for the second half, but the pattern of the game remained the same with Horsham looking the more confident in possession, threatening in attack and comfortable at the back.

It didn’t take the Hornets long to extend their lead. A superb diagonal ball from Miles, drilled right to left, found Harvey Sparks who managed to keep the ball in play before winning a corner.

From the resulting set-piece, the ball was met with a goal bound header which the Saltdean defence were able to clear, but only into the path of Mies, whose fiercely-struck downward shot ripped into the net, giving the ‘keeper no chance.

The third goal arrived in the 65th minute, following an exchange of passes between Horsham’s number 11, a second half trialist, and Harris.

The midfielder drove forward before cutting inside onto his left and thumping a low shot into the corner of the net.

Whilst Horsham were now completely in control of the game, the Tigers kept a good shape and worked extremely hard to ensure that they were not embarrassed, and although the Hornets did have a few more chances, the 3-0 final scoreline was a fair reflection of the game.

The Hornets continue our pre-season schedule with a short trip to Crawley on Tuesday evening, to face local rivals Three Bridges, and once again, while supporters will be unable to watch the game live, we will bring you all the action through our Twitter feed and match report. 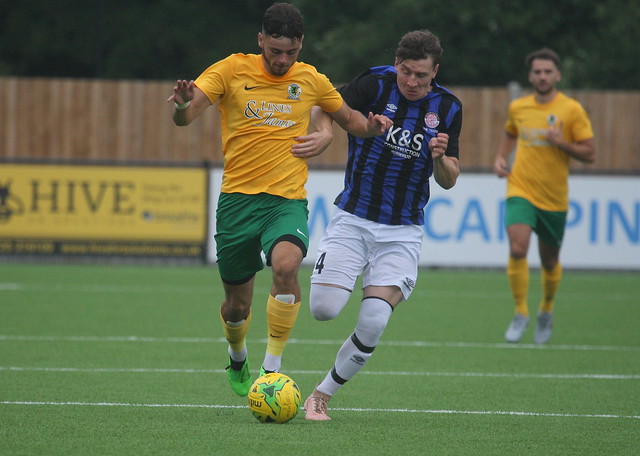