Horsham are through to the last four of an Isthmian League knockout competition for the first time since 2001, thanks to Jack Brivio’s fourth goal in three games, but were made to work hard for their victory by a Margate side that played for forty minutes with only ten men.

Brivio’s goal, scored after just seven minutes, suggested the home side might be in for a comfortable night against an opponent who had enjoyed a 3-0 win on the same ground just three months ago. But first half injuries to Brivio and Alex Kelly seemed to upset their rhythm and it was Margate who enjoyed by far the better of the second half, even after losing skipper Ben Swift to a 52nd minute red card. Yet it was the visitors’ inability to properly test goalkeeper George Bentley that would be their downfall as the Hornets successfully defended their narrow lead to join Bracknell Town and Cheshunt in the League Cup semi-finals, along with either Brightlingsea Regent, Folkestone Invicta or Basildon United.

Margate named a strong side for this match, with Gillingham loanee Tommy Lamb and striker Jack Richards coming into the starting XI at the expense of Reece Prestedge and Michael Abnett from the team that drew with Carshalton on Saturday, while Horsham brought in Will Miles and Rob O’Toole for Dylan Merchant and the benched Chris Smith.

The Hornets ought to have gone in front in their first meaningful attack when, with five minutes played, Lee Harding turned his marker and floated in a delightful far post cross that Brivio failed to get a proper contact on from just six yards out. Harding was then denied when he got on the end of Harvey Sparks’ deep cross, Saturday’s Man of the Match seeing his volley hit Adem Ramadam in the midriff before being cleared, but the positive start was rewarded just a minute later. Another inviting cross, this time by Steve Metcalf, found Brivio ghosting in to the box to apply the first time finish.

Boosted by a small contingent of Dorking Wanderers supporters, the home faithful found their collective voices but it was another ten minutes before they had much to get excited about when Sparks’ terrific ball down the line gave Greg Cundle the chance to show his pace. But, having got into the Margate penalty area and cut back on to his right foot, the full-back was able to make a vital block.

Brivio’s night would end prematurely when a knock to the back of the knee saw him replaced by Charlie Harris, midway through the half, but the midfielder had barely got into his groove when the visitors fashioned their first threat on goal. The ball was played across field to Richards and his dangerous near post cross was well held by Bentley beneath his own crossbar, as Jordy Robins attempted to head it in to the net. The Hornets then wasted a fine chance to double their lead when, after Kelly had done well to win the ball in midfield, Cundle raced towards goal and elected to pass out wide to Sparks when perhaps better placed, and the full-back sent a rising shot high over the goal.

Harris and Harding then twice combined in search of a second goal, the first when Harding shot over the bar from Harris’ clever pass, and the winger going even closer when he took his team-mate’s terrific pass skillfully on his chest before putting an effort just wide of the angle of post and crossbar. Horsham almost wrapped up a highly competent first half display with a picture book goal, a couple of minutes from the break, when a wonderful combination between Sparks and Cundle took the ball three-quarters the length of the ground only for Cundle to put his effort too close to Gate goalkeeper Joe Tupper.

Horsham were forced into a second substitution upon the resumption with Kelly, who had suffered a whack to the hip, replaced by Smith. And the striker wasted little time in getting into the action when collecting an incisive pass from Sparks inside the box and stabbing his shot against the foot of the post.

The evening threatened to turn sour when, while most eyes were on the ball as a corner was cleared as far as Lamb on the edge of the Horsham box, players from both sides squared up to each other with punches thrown and allegations of a stamp on the prostrate Miles. Although difficult from the sidelines to determine exactly what took place, referee Connall Bartlett and his officials were in agreement that Swift was the chief aggressor and the Margate captain was shown a red card.

Perhaps aggrieved at the decision, or simply knowing they had little to lose in pushing forward, the visitors began to take the game to Horsham from that moment on and a well-timed pass by Lamb dissected the Horsham defence and created the space for Chris Sessegnon to put in a dangerous low cross that Bentley initially fumbled and then gathered at the second attempt before a visiting forward could profit. Horsham did create a chance of their own, but O’Toole could only head Metcalf’s cross tamely at Tupper, while at the other end a dangerous cross by Robins was missed at the near post by Noel Leighton and ran harmlessly out of play.

As play switched immediately to the Margate end, O’Toole’s cross lacked paced, preventing Smith from getting a telling contact on the ball which sailed over the crossbar. Harris was similarly off target with an optimistic effort from 30 yards but the chances were beginning to dry up as tiredness and the freezing temperatures set in. Yet the Hornets received a huge let-off on 73 minutes when Joe Shelley scuffed a pass straight to the feet of the unmarked Leighton who elected to take his shot early, fizzing his effort just wide of Bentley’s right-hand post from the edge of the penalty area.

Margate had not had a better chance all night, nor would they after, as the remainder of the match concluded without further notable incident and Horsham had their fourth win, and fourth clean sheet, in a row. 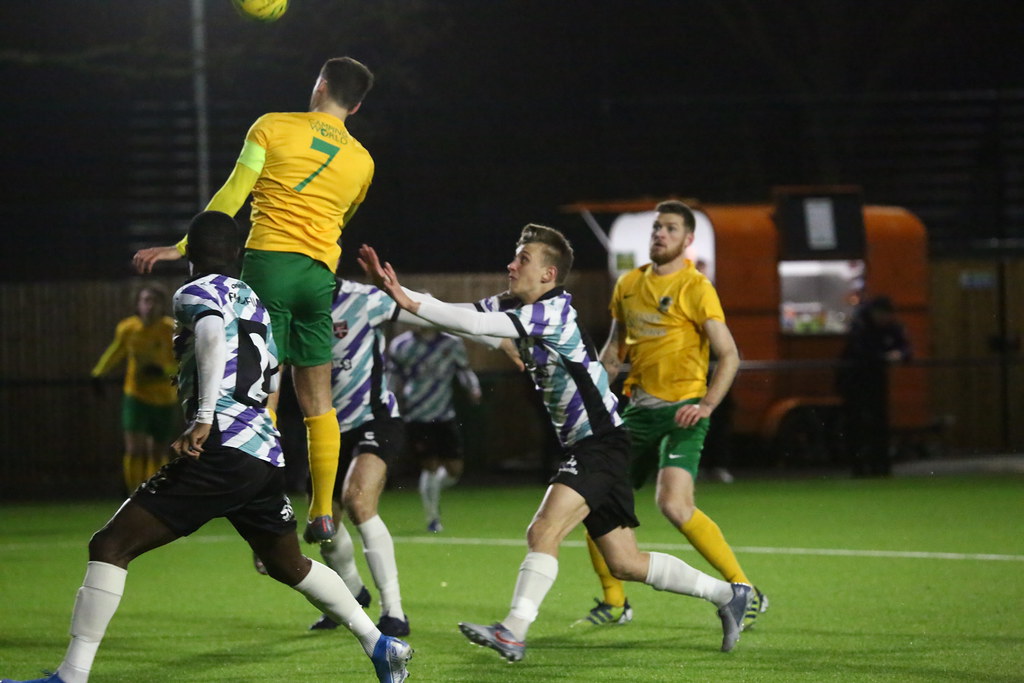