Horsham’s hopes of a showpiece appearance at Brighton’s Amex Stadium will have to wait at least another season after Worthing scored three times in the second half to book their place in the last four of the Sussex Senior Cup.

The Hornets looked to have one foot in the semi-finals when Rob O’Toole and a sensational Lea Dawson strike put them in control at the break. But a contentious penalty, converted by Ollie Pearce, handed the Mackerel Men a lifeline around the midway point of the second half and when Pearce scrambled in the equaliser, 12 minutes from time, there looked only one winner, even though there was a hint of offside about Reece Myles-Meekum’s decisive 83rd minute strike.

The disappointment among the home fans at the final whistle was palpable. Not since 2011 have the Hornets progressed beyond this stage of the county’s most prestigious cup competition yet they began the match full of purpose and desire, not only to change that statistic but also to avenge their 3-0 Boxing Day league defeat at the hands of the same opponents.

It wasn’t necessarily a night for decent football, with fine rain sweeping and swirling across the pitch almost throughout, but this tie was between two teams very much at home on the artificial surface and both showed moments of real quality. The match was just two minutes old when Kieran Lavery tested Carl Rushworth’s handling, with a curling effort from the corner of the six yard box, and then a great crossfield pass from Charlie Harris gave Rob O’Toole the space to set up Lavery for another attempt that was blocked at the expense of a corner.

Two minutes later and Horsham were celebrating a terrific team goal. Alex Kelly did well to win the ball in midfield for Dawson to find Harvey Sparks, and when he outpaced two defenders and crossed low into the box, Harris smashed Taurean Roberts’ lay-off against a defender only for O’Toole to curl an exquisite shot across Rushworth and inside the far corner. It was just what the home team needed to help banish those festive blues but they were nearly brought back down to earth when, just two minutes later, Cameron Tutt found Callum Kealy inside the box and his sharp turn and shot flew over the top of George Bentley’s near post.

Sparks, sent-off against his former side in that league reverse 13 days ago, was at the heart of Horsham’s next attack when O’Toole wrestled possession of the ball and played it into the path of the overlapping full-back. He cut inside and rolled a pass into the path of Harris whose first-time strike went just inches past the post. Worthing were finding it difficult to create any clear-cut chances and a chip by Jasper Pattenden from the edge of the area made for an easy save for Bentley. At the other end alarm bells briefly rang for the visitors when Rushworth, positioned well outside his goal, elected to control a long punt forward by the Horsham defence on his chest only for the ball to drop invitingly for Harris inside the centre circle. Having already showcased his shooting prowess from a similar distance twice this season, the midfielder let fly only to get a second chance after the ball cannoned back to him off a defender. This time he slid the ball through for O’Toole who was beaten to the chance in the nick of time by the relieved goalkeeper.

Worthing’s former Bognor striker, Pearce, reminded everyone of his abilities when his fiercely hit shot just cleared the angle of post and crossbar but, from a close shave at one end came an absolute pearler of a goal at the other. When a long clearance from Bentley was headed out as far as Dawson, 35 yards from goal, the midfielder struck an instinctive first time volley that gave Rushworth no chance as it ripped past him and into the net. It was the second spectacular goal in as many home games, following O’Toole’s stunner against Lewes on New Year’s Day, and put Horsham deservedly in the driving seat.

The Mackerel Men were shaken and might have gone further behind just two minutes later had it not been for the sharp reactions of Rushworth, who turned Alfie Young’s miscued clearance away from the foot of the post after the defender had got himself in a muddle trying to clear Sparks’ low driven cross. Horsham were showing signs of their confident self and almost produced a picture-perfect move when Bentley’s measured pass to Taurean Roberts, enjoying arguably his best game for the Hornets, was instantly controlled and crossed towards the unmarked O’Toole that, had it been an inch or two lower, would surely have led to a third goal for the hosts.

The visitors were unfortunate not to reduce the deficit when Pearce’s terrific run and cross cried out for a telling touch but flew, unconverted, across the face of goal just out of reach of two team-mates. It was enough for the travelling fans to raise their vocal support as they tried to galvanise their side on what had so far been a dismal night from the side just a short trip down the A24. But they would have been encouraged by a final five minutes in which they applied plenty of pressure on Bentley’s goal, first through Pattenden’s angled 18 yard drive that was fisted away well by the ‘keeper and then when Pearce took Joel Colbran’s wonderful defence-splitting pass on his chest only to be denied by Bentley’s brave block.

A sore Achilles led to O’Toole being replaced by Pamment at the break and the former Worthing man was almost immediately into the action, latching onto a perfectly-executed pass from Harris to race in on goal only to collide with the advancing Rushworth. But, as the ball ran free towards the unguarded net, referee Tim Robinson decided the substitute had committed a foul and play was restarted with a free-kick to the visitors.

One-time Hornet Darren Budd was first to try his luck for Worthing after the restart, finding himself in the right place to fire Will Miles’ clearance goalwards, but it cleared the crossbar by some distance with Harris showing rather greater accuracy at the other end where he ignored Steve Metcalf and Pamment either side of him to fire the ball straight down Rushworth’s throat.

There were loud appeals for a goal, and even for a penalty, from Worthing’s players and supporters when Bentley could only parry Pearce’s 25 yard free-kick and, in the melee that followed, the ball was frantically cleared from close to the line with some suggesting it had gone in and others that it was blocked by a Horsham hand. In either event Mr Robinson, having conferred with his assistant, said no and play was allowed to continue. The contest was really hotting up at this stage and, on the hour, Lavery dispossessed Young on halfway and Pamment went off on a pacey run before hitting a tremendous shot that looked destined for the back of the net until the ‘keeper punched it behind for a corner.

The substitute went close again, a minute later, when he was the recipient of Harris’ pass but, this time, his right-foot effort just cleared the frame of the goal. If Horsham’s supporters had earlier rued the loss of O’Toole, they would have been delighted by the altogether different threat Pamment provided in attack. However, no sooner had they been readying themselves to celebrate another goal than Worthing were handed a way back into the tie. They had just seen a header cleared off the line by Harris when Sparks was adjudged to have fouled his man inside the box and Pearce stepped up to send Bentley the wrong way to begin the fightback.

In fact they might have levelled matters almost immediately when Horsham lost possession from the restart and Pearce ran purposefully at the defence, forcing Bentley to push the ball round the foot of his near post. Home nerves might have been calmed had Pamment and Dawson not got in each other’s way when attempting to reach Robert’s dangerous cross and another chance went begging when, after Ricky Aguiar had been cautioned for pulling Dawson back just two minutes after coming on for Colbran, Pamment sent the free-kick straight into Rushworth’s arms.

The rain may have now stopped but the action remained relentless and when Harry Mills’ fine anticipation broke up a Worthing attack, he raced upfield with Pamment who elected to go it alone and eventually found himself crowded out on the edge of the visitors’ penalty area. Frustration would turn to despair for the hosts just three minutes later when a good break down the Worthing left saw the ball moved across the middle and sent in low to the danger area where Bentley could only parry and Pearce bundled the ball home from almost on the line.

With 12 minutes remaining, this match still wasn’t over as Horsham hit back when Bentley’s driven pass once more picked out Roberts who beat his marker and unleashed a piledriver of a shot that Rushworth did fantastically well to touch behind. Aguiar then sent in a long range strike that was taken easily by Bentley but then came the late drama. Spotting that Worthing still had possession, despite a clear foul on sub Marvin Armstrong, Mr Robinson allowed play to continue and Armstrong slipped the ball through to an offside-looking Myles-Meekums who sent a rising shot into the roof of the net from close range, prompting scenes of delirium among the visiting supporters.

Pamment did get the ball in the Worthing net in the final minute, but the goal was disallowed for offside, and there was just time for Dawson to try the spectacular once more, this time clipping an overhead shot onto the top of the net, before Worthing could celebrate their stunning comeback and a potential May trip to Falmer. 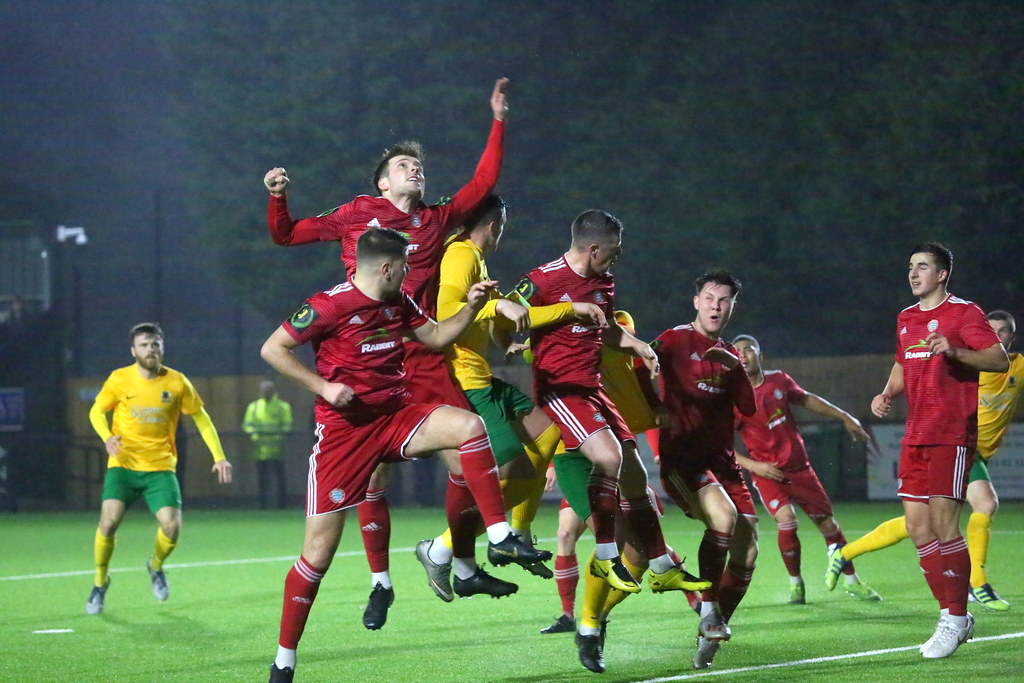