A 12th minute goal by JJ O’Sullivan was enough to decide this well-contested Velocity Trophy tie, sending the Hornets through to the last sixteen of a competition in which they seldom excel.

For a long spell, though, it looked as if the weather would be the winner when fog descended and enveloped much of the pitch, making visibility difficult for the majority of the first half. Thankfully, after a delayed start to the second period, conditions had improved sufficiently to restart but, although both sides had chances to change the scoreline, neither defence could be successfully breached again despite the best efforts of the respective forward lines.

Dom Di Paola had promised to mix things up a little in the starting line-up and he was true to his word, with Will Miles returning to the defence, Kieran Lavery playing his first match since his month-long loan at Horley Town and Harry Mills taking up a midfield role alongside Alex Kelly. But perhaps the biggest surprise came with the attendance, an impressive 175 ignoring the damp, wintry, conditions to come in support of the two teams.

The majority of spectators might have been given an early cheer when, with only three minutes on the clock, a penetrating run and cross by O’Sullivan saw the ball only half-cleared as far as Charlie Harris but his underhit effort was easily cleared from in front of goal. Whyteleafe, fifth in the South-East Division, went much closer in their first meaningful attack when Junior Aikhinbare’s lovely turn and pass in the centre of midfield picked out Izzy Adebayo who curled a terrific left-footed strike against the crossbar.

At the other end, a nice exchange between O’Sullivan, Lavery and Mills saw the latter’s enticing low ball into the box fail to find an amber-shirted team-mate and then Kelly had to come to his side’s rescue to block a shot from Martin Sontan after the winger had showed good feet to get away from Joe Shelley. The breakthrough came just two minutes later and was the result of more fine build-up play down the Horsham right in which Mills’ pass was instantly despatched by Harris into the path of O’Sullivan. The full-back took the ball on a couple of paces before firing the ball into the far corner of the net for his first goal in Hornets colours.

By now the fog was beginning to hang above the pitch like some eerie, elongated, spectre but Harris’ hopes of capitalising on the diminishing visibility came to nought when his ambitious thirty yarder, although leaving ‘Leafe ‘keeper Sheikh Ceesay rooted to the spot, narrowly cleared the crossbar. Horsham wasted a shooting opportunity when another low ball by Mills was only partially cleared and, when a defender stumbled on the ball and was dispossessed by O’Sullivan on the edge of the box, the goalscorer elected to pass rather than shoot and the chance was lost.

Mills’ marauding runs and dangerous crosses were becoming a feature of the first half but so was his team-mates’ inability to make any of them count, with Kelly the latest to fail in front of goal when he sidefooted an effort wide of the near post. Perhaps out of frustration, Mills opted to go it alone in Horsham’s next attack when, picked out by an incisive pass from Harris, he shot for goal but sent the ball harmlessly over the bar by some distance.

Despite most of the danger coming at the other end of the pitch, Whyteleafe were showing themselves to be a decent passing side, comfortable on the ball and with the confidence to take on their higher-ranked opponents, and they might have levelled had Matthew O’Donoghue got a better contact to Mason Saunders-Henry’s inswinging cross on the half hour. But the Hornets quickly picked up the pace again and, after Harris had produced some clever play to come away with the ball in midfield, his shot from distance was touched behind by Ceesay for a corner.

Another inviting ball from Mills went begging as it flew, unchecked, across the face of the Whyteleafe goal before Shelley got his body in the way of a shot from Adebayo after he had side-stepped the challenge of O’Sullivan inside the Horsham box. Then when a Whyteleafe corner was cleared back to the taker, Saunders-Henry, the visiting number ten saw his right-foot shot deflected beyond the far post by Mills.

Five minutes before the break, and with it becoming increasingly difficult to see from one side of the pitch to the other, referee Neil Morrison conferred with his assistant and both benches before allowing play to continue amid genuine concerns that the tie might have to be abandoned. In the final act of the half, Jamie McGeoghegan might have been grateful to nature’s help for hiding his near-embarrassment when he sliced Mills cross over his own goal from close in.

Thankfully the fog was noticeably lifting during the interval so it came as a surprise to everyone that Mr Morrison took the decision to delay the restart by ten minutes. But delay it he did and, when play resumed, it wasn’t long before George Bentley was called into his first meaningful stop of the night when he got down low to prevent Aikhionbare’s low driven cross from reaching a team-mate at the far post. Mills also went close when a forceful run down the flank saw him cut into the penalty area and shoot into the side-netting after having appeared to have overrun the ball.

Whyteleafe almost got back on terms in rather fortuitous circumstances when Adebayo’s deep, hanging, free-kick was too long for a team-mate yet struck Harris on the knee, sending the ball dangerously towards the goal where it was hacked away from danger. From their next attacking set-piece, the visitors went even closer. Another free-kick from Adebayo was met this time by Bentley Graham but he put his header too close to Bentley, who parried the effort away only as far as a striker whose shot was blocked by Miles at close range.

Miles then popped up in the other penalty area to head a free-kick just over at full stretch before this increasingly open contest saw Saunders-Henry produce a scrambling save from Bentley. Good link-up play between Lee Harding, on for Taurean Roberts, and Harvey Sparks created a half chance for Jack Brivio but he was challenged in the nick of time by McGeoghegan on the penalty spot, and a good chance went begging straight after when Brivio carried the ball forward in an attack in which the Whteleafe defence were outnumbered by four to three. But, after Harris had dummied a pass to Lavery, the ball was helped on to Harding who was quickly closed down and his strike was diverted into the side-netting off a Whyteleafe toe.

The match then entered a ten minute lull during which there was a flurry of substitutions with one of them, Horsham’s Kieron Pamment, immediately in the action when he went full stretch to get on the end of Mills’ low far post cross that he could only put out of the ground. Mills, surely a candidate for Man of the Match, showed great skill to turn his opponent, tight to the touchline, before sending the ball into Brivio who, in turn, found Harding. But when the substitute turned neatly on the edge of the box, he could only fire the ball straight at Ceesay, who had narrowed the angles well.

Horsham were continuing to press and won the ball back well, playing it into space for Pamment who waited for the arrival of Harris before rolling the ball in to his stride but the shot went wide of the near post. With the match entering a bemusing six minutes of stoppage time, the Horsham pair repeated the feat, this time Harris’ shot taking a deflection to send the ball towards the waiting Harding only for Ceesay to make a timely intervention, fielding the ball at the sub’s feet. Whyteleafe finished the game with a couple of free-kicks but the home defence held out to progress through to the next round with a satisfying conclusion to their 2019 home fixtures. 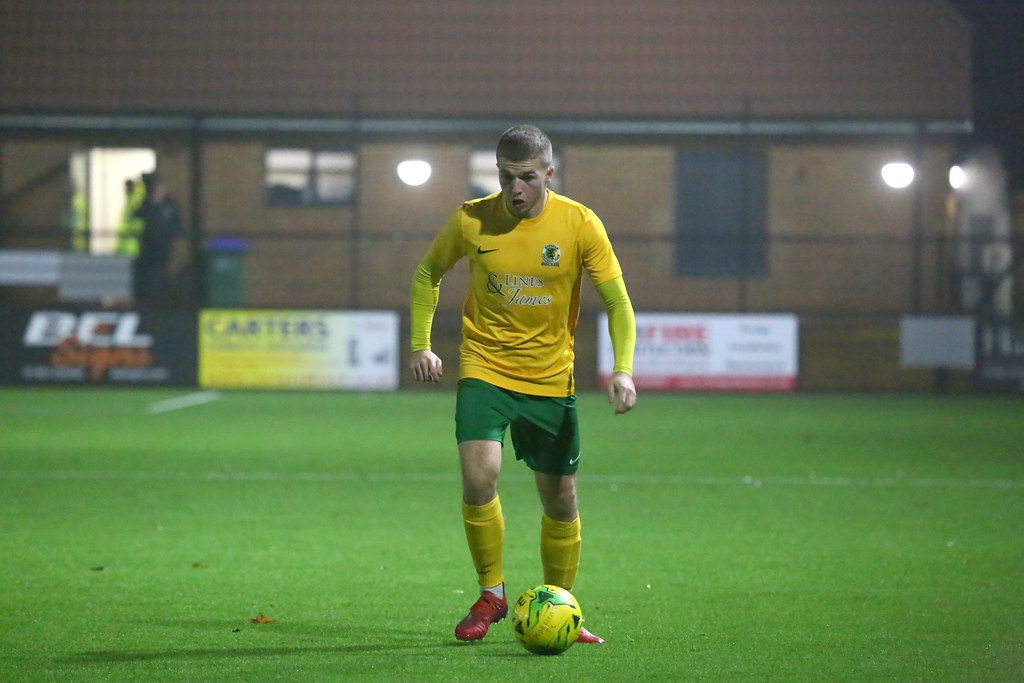