The Hornets set up an Emirates FA Cup 2nd Qualifying Round tie against Dartford as they saw off the Metropolitan Police in their replay at The Camping World Community Stadium as well as secure their first ever competitive victory at their new ground at the third time of asking.

Having battled back from a goal down early on, Horsham led most of the second half 2-1, but the Police made Horsham pay for their crime of missing a succession of fine chances when Luke Robinson fired in with nine minutes left to play. However, with extra time looming Chris Smith would have the final say when he fortuitously bundled in off his chest to take Horsham through to the next round and leave the Met Police feeling robbed.

The Met’s frustration at the end resulted in the game’s only yellow card being shown to Alex Fisher, whose frustration got the better of him as the visitors felt aggrieved as they claimed Smith had handled. Yet replays indicated that Smith had nothing to be guilty about, with the ball clearly hitting his chest before rolling in.

The game was barely two minutes old when The Police led their first investigation into Horsham’s own half. Having won a free-kick just 20 yards from goal, Jack Mazzone struck the ball with some venom, bending a delightful effort beyond the wall and past goalkeeper George Bentley. But fortunately, from Horsham’s perspective, his effort hit the inside of the post and bounced back out to safety.

Horsham took the fight to the Met four minutes later as Zack Newton’s lay-off to full-back Harry Mills was followed by a cross into the box that was half-cleared towards Lee Harding who attempted to direct a header on goal but it was comfortably gathered by Charlie Burns, in goal for the visitors.

The Old Bill were soon in front, however. With possession nine tenths of the law, Newton gave it away and the Met quickly cycled the ball forward to Bilal Sayoud who took a couple of strides to get into a good position outside the box where he hit a swerving shot that gave Bentley no chance.

The Hornets responded gradually and enjoyed a good bit of pressure soon afterwards, with a long distance attempt from Harris flying wide, while a quick counter from the home side allowed Smith to run onto a fortunate flick on. However, as he broke into the box, he was thwarted by some superb defending by Jeremy Arther who raced back to cover with a fine block.

A long range piledriver from an unlikely source in the form of Will Miles stung the hands of Burns, who was almost caught off guard, but for all of Horsham’s industry the home side struggled to find a cut and dry chance to draw level with Newton zipping a ball across goal that was ultimately too hard for anyone to get near.

But, out of nowhere, Horsham dragged themselves level. The Hornets played with electrifying pace on the left wing with Harvey Sparks fed out wide, and the former Bognor Regis Town man fired in with a stunning shot to make it all square at the interval.

Having pulled level before half-time, Horsham took the lead with the second period just three minutes old. A long ball over towards the danger zone was flicked on by Harding with a backwards header, and Smith showed desire to beat his man and latch onto the ball before sumptuously slotting in across the face of Burns into the bottom far corner.

The Hornets really should have gone further in front with their next attack. Alex Kelly’s wonderful ball out from the back sent Newton on a run down the right flank in plenty of space, and he sent in a teasing cross into the box where Smith was steaming in. Yet with just Burns to beat, and the Met’s defence yards behind, the striker incredibly let the Police off the hook and side-footed wide.

Sparks then sent in another fine cross that just eluded the head of Smith as Horsham continued to search for a two-goal cushion. They were presented with another superb chance to extend their lead when Harding was put through for a one-on-one against Burns, yet the forward’s run was hesitant allowing the Met time to cover defensively and he shot straight at the visiting shot-stopper who parried, Harding smashing the rebound high and wide.

Another good chance came Horsham’s way with The Hornets looking to counter-against their visitors, Smith this time chasing down the ball to return a clip in towards the near post that Kelly scuffed wide.

With just over fifteen minutes remaining, Newton’s pass to Harris resulted in the midfield general going agonizingly close when he curled one from 25 yards out that clipped the top of the crossbar, and another Hornets attack would break down inside the box as Newton’s bamboozling run saw him trick his way beyond two markers and attempt to slide the ball to Kieran Pamment but the midfielder lost his footing as the Boys in Blue cleared.

The concern for Horsham supporters was a repeat of Saturday’s game that had led to the replay in the first place in which Horsham had plenty of chances to put the game to bed, but still contrived not to win. Thus, there was a strong sense of deja-vu when Met Police once more punished the home side’s profligacy in front of goal. All it took for the Met was a zipped ball across the face of the box where Luke Robinson smashed home with a rasping effort.

The game looked poised for extra-time when Hani Benchiche sent a looping header over the bar while unmarked yet, within the first minute of injury time, Horsham scored the winner in spectacular style.

Pamment sent in a searching cross into the penalty area which should have been headed away by the Met Police defence but in stole Smith who bundled the ball over the line with his chest in unorthodox fashion as he celebrated with his teammates who couldn’t hide their delight at fighting the law, and emerging as winners. 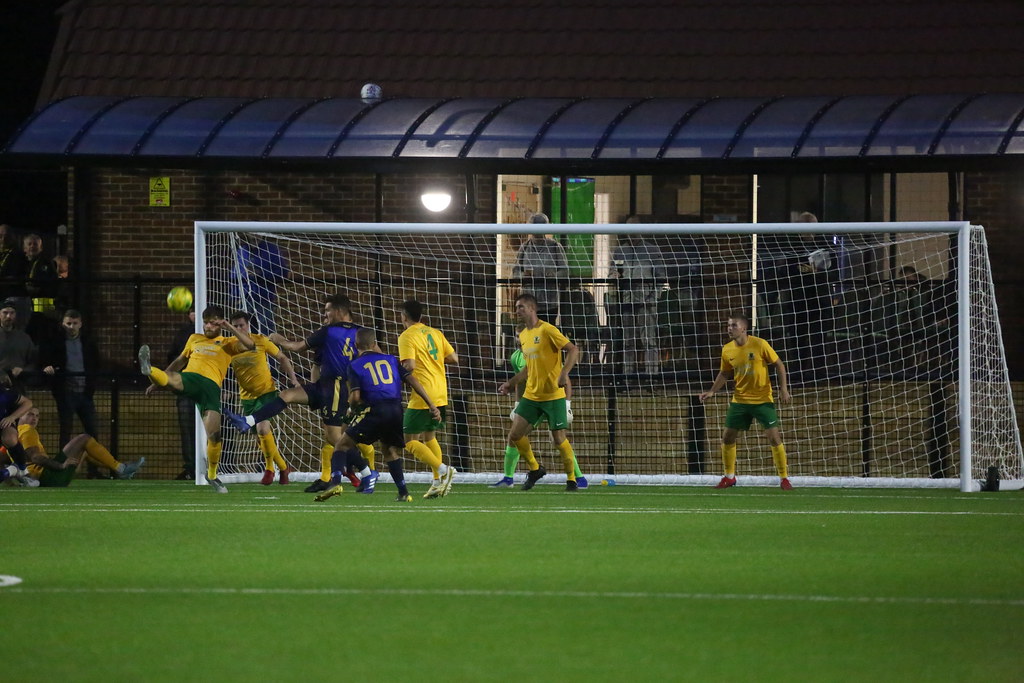