It might have been uncomfortably hot in East London, but Horsham comfortably made certain of safe passage within the Emirates FA Cup as The Hornets thrashed Essex Senior League side Tower Hamlets 1-6 at The Mile End Stadium, overlooked by Canary Wharf’s skyscrapers.

In one of the hottest days of the year, Horsham may well have been thankful that they were not involved in a league game, with Dom Di Paola’s side able to play this game at a leisurely pace without the need to get out of third gear as Hamlets struggled to cope with the Isthmian Premier League side as they hit the Londoners for six.

Goals from Will Miles, Zack Newton, Jared Rance, a brace from Chris Smith and an own goal from the Hamlets defender Alan Zukolli saw Horsham take full control, while Yoan Marc-Oliver hit a consolation for his side.

As the sun baked down, Horsham fashioned out an early chance on six minutes with Chris Smith finding plenty of room on the right flank, his cut inside and square ball into the box was behind Kieran Lavery, but came loose to Harvey Sparks – making his first appearance of the season – and the full back saw his shot charged down by Alan Zuqolli.

An awful shot from 30 yards out was blasted well over by the home side’s Balde Suaibo, but on 15 minutes, Horsham took the lead. An excellent delivery from the corner flag was sent into the box and up went Will Miles to forcefully head in with a towering header.

Horsham went looking for a second goal when Charlie Harris floated in a freekick that was headed narrowly over by Lea Dawson, while at the other end, the hosts were struggling to find any sort of outlet, with Suaibo again wasteful when he was held up by his marker and smacked another poor shot well wide of the far post.

Sure enough, Horsham would double their lead in the 26th minute. Zack Newton’s throw in to Miles was quickly played into the box towards Chris Smith, who’s sliced half volley crept into the bottom corner as Hamlets conceded cheaply.

With an assist to his name, Miles was then on hand to deny Tower Hamlets from finding a route back into the contest, when his excellent last ditch tackle on Yoan Marc-Oliver poached the ball from him before the forward even had chance to think about applying the finish after he had been played through on goal inside the box.

Harris was invited to shoot upon picking up a loose ball, taking three strides forward and cracking one just wide, but the home side showed a bit more fight in them as Suaibo did well to hold off two defenders and curl a shot wide from the edge of the area as Horsham afforded him a rare opportunity.

Goalscorer Miles would receive a nasty blow to the head from an unintentional high boot as he went in for a challenge in Tower Hamlets box, and would eventually be replaced at the start of the second half by Joe Shelley, but with the game entering first half stoppage time, Horsham grabbed a third before the interval once play resumed. With the referee allowing Horsham to continue off from where he blew up, Lavery’s short stride and curled shot was only parried by goalkeeper Jack Gannon, the rebound was headed straight at him and pushed onto the bar, but Smith nipped in to make certain, nodding in unchallenged.

With Horsham appearing more than happy with their lead, the visitors may have been guilty of taking their foot off the gas with Di Paola possibly concerned about how his players might fare in the energy sapping heat and with an eye on the Sussex derby against rivals Lewes 48 hours later.

In the 70th minute, Hamlets caught The Hornets napping at the back with a killer ball sent straight into the run of Marc-Oliver who dispatched cooly, slotting it past George Bentley who had been virtually untroubled until then.

Bentley’s opposite number, Gannon however was showing signs of uncertain goalkeeping, first nearly dropping Newton’s clipped effort, and then making a clanger a minute later. The keeper’s decision to rush off his line appeared to be a 50/50 chance of him reaching the ball first as Newton chased his own knock on, yet Gannon took his eyes off the prize and missed the ball completely, as Newton’s gentle nudge rolled into the net leaving the home goalkeeper embarrassed.

Joshua Rosioke sent a fierce drive wide of the far post as Hamlets showed some spirit late on, but Horsham piled on the misery with two further goals in the final ten minutes.

Again, Newton was involved as his pace allowed him to draw onto Shelley’s dictated ball out from the back, and he again chased it down and beat Gannon who had come off his line once more, this time however his touch took the ball away from goal, but despite Gannon and Alan Zuqolli running back to the goal-line to recover, Newton’s quick thinking resulted in goal number five as he just smashed the ball into the net at the defender forcing an own goal.

Horsham wrapped it up three minutes from time with a sixth and final goal. The attack once more orchestrated by Newton using his speed to cut through the home side who by now had just given up, and with substitute Jared Rance pointing to where he wanted the ball, Newton laid it on a plate for him to blast home from inside the penalty area.

Horsham will now have to wait until next week to discover who their opponents will be in the First Qualifying Round when the draw is made at Wembley. 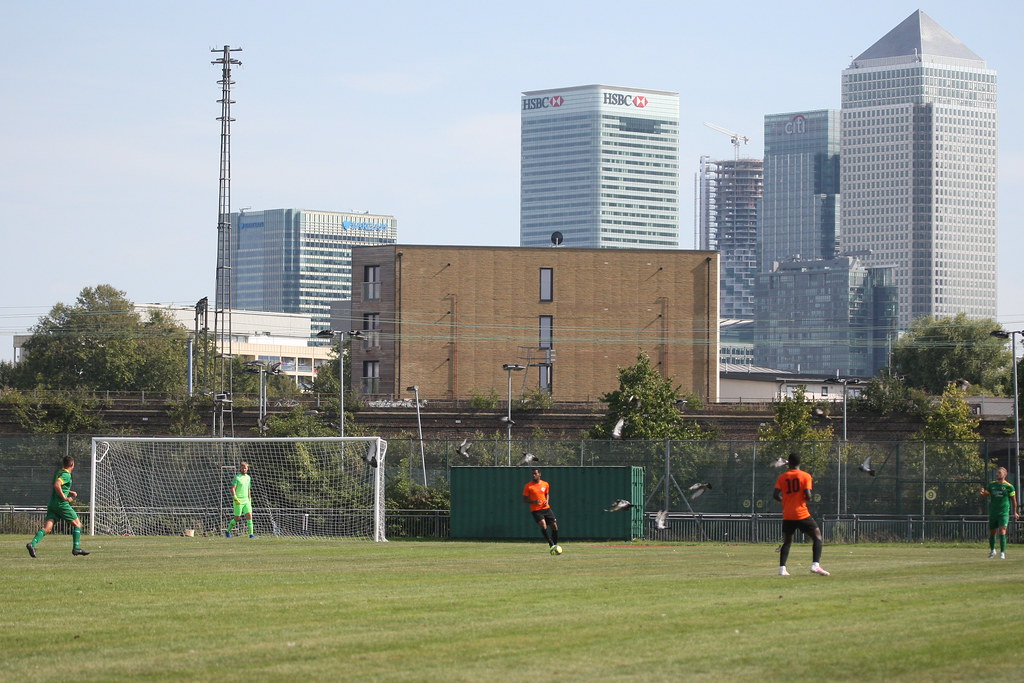