Sometimes in football, it just isn’t your day as Horsham fell to a fifth successive away day defeat in the league at Cray Wanderers. Things looked promising for Horsham when the hosts saw Ben Mundele dismissed just 13 minutes into the contest for a second bookable offence, only for referee Tom Ellsmore to award The Wands a soft penalty for handball which was converted by the division’s top goal-scorer Joe Taylor.

Despite their numerical disadvantage, Cray doubled their lead on 27 minutes thanks to a fabulous curling effort from Rhys Murrel-Williamson, but then two minutes later, Horsham pulled a goal back in a breathless opening half hour.

Cray would then pull off a backs-to-the-wall display to thwart Horsham constantly during the second half, but Horsham spurned a super chance to take home what would have been a deserved draw, when Harry Mills saw his penalty saved in the 82nd minute as Horsham slipped up once more.

With referee Mr. Ellsmore being assessed under the watchful eye of the FA, the game was barely seven minutes old when the first yellow card was shown to Ben Mundele in what appeared a harsh booking, while Horsham skipper Jack Brivio was also cautioned for a lunging challenge on Jerome Federico moments later.

The two bookings were sandwiched either side of an effort from Horsham’s Rob O’Toole, who found space inside the box and leathered a shot at goal, but it proved too direct to goalkeeper Lewis Carey, who parried away.

Horsham were then forced into a change when Steve Metcalf gave way for Dylan Merchant, and then a minute later, Mundele found himself off the pitch when he lunged in on Greg Cundle, who would have been away one-on-one had he not been fouled. There could be no complaints this time around, as Mundele saw yellow once again, and was given his marching orders.

Horsham looked to make their extra man count by exploiting the space on the right wing as Lea Dawson sent in a dangerous cross that Carey spilled while claiming, however The Hornets could not react quick enough as Cray got to the loose ball and cleared. Moments later, Cundle appeared to get away with a foul on Rhys Murrell-Williamson and he charged towards goal, but his shot was cleared off a defender.

Cray had the ball in the back of the net on 20 minutes, only for it to be chalked off by a raised flag, when Frederico evaded two challenged and slipped a sliky pass into the path of Joe Taylor, but the striker was a yard offside as he rolled into the net.

Not that it mattered to Taylor, his goal would come four minutes later from the spot. It was harsh on Horsham, as Jay Leader’s header rolled down off onto the arm of Dylan Merchant who could do nothing about it. Intentional or not, Mr. Ellsmore immediately pointed to the spot and Taylor obliged sending Bentley the wrong way.

Rather than sit and defend their slender lead, Cray doubled it in the 27th minute with a cracking strike from Murrell-Williamson. The pacy forward strode down the right flank, and cut in as he walzed into the box, Harvey Sparks then took a nibble but backed out fearing he would concede a penalty, and The Wands man curled in on his left foot with a sumptuous goal.

Horsham quickly found a way back in the game as they made their numerical advantage count for the first time. O’Toole’s off target header was kept in play by Cundle, and he promptly recycled the ball back into the box towards Lee Harding, who steered past Carey.

Sensing that they could work their way back into the game, Horsham began the second half brightly as they forced Cray back into their own half as the home side began to dig in. The visitors came inches close to drawing level soon after the restart when Alex Kelly’s corner was flapped at by Carey, and somehow missed everyone and struck the frame of the goal.

Harding would then smash a volley narrowly wide, but despite the extra man, Horsham were finding it hard to test Carey properly in goal, with Dawson deciding to have a goal himself with 20 yarder that was comfortable enough for The Wands shot-stopper to deal with.

With just over 15 minutes left, Chris Smith latched onto a good through ball but was taken wide by Carey who came off his line and slipped, but again Horsham’s play lacked the killer touch, as the pass to Harding was sliced at with Cray defending resolutely.

Tauren Roberts then tried to make something of his own as he found himself positioned just inside the semi-circle, he shifted the ball onto his right foot and hit a dipping shot at goal that Carey did well to tip acrobatically over the bar.

With ten minutes remaining, Horsham won a succession of corners, but with the impressive Jay Leader marshalling the back four, there was simply no way through for The Hornets who continued to see balls pumped into the box turned away.

But on 82 minutes, Horsham were handed the chance the craved all afternoon. Once again, Mr. Ellsmore pointed to the spot, but again, it appeared soft as Lea Dawson tumbled under a pretty innocuous challenge from Karl Dent.

The pressure on Harry Mills’ shoulders, he stuttered his run up and hit low but unassured, as Carey dived the correct way to push the ball onto the base of the post.

Carey would once more seal the points for his side in injury time, opening his palms during a diving save to divert a driven attempt by Kelly, but despite all the second half dominance, Horsham once again would end up with nothing to show for their exploits on the road. 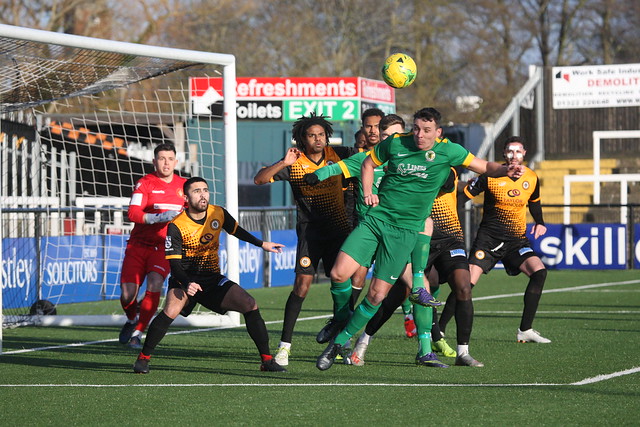