A second-half implosion ensured the Hornets would receive no late Christmas presents as they conceded three goals to a clinical Worthing side on Boxing Day.

An edgy first-half saw little chances but, despite going into the break goalless, the hosts had the advantage after Harvey Sparks was sent off for two bookable offences shortly before half-time.

Helped by the extra man, Worthing took the lead through Alex Parsons and the Reds doubled their lead thanks to a gift from Joe Shelley when Ollie Pearce pounced on a mistake from the defender.

The Hornets went down to nine after Ben Dyett was shown a straight red before Pearce notched his second, and Worthing’s third, in added-time as Dom Di Paola’s side left Woodside Road empty-handed.

The result leaves Horsham four points adrift from the top with Worthing now going level with leaders Folkestone Invicta on 44 points following the Kent side’s 4-0 thrashing of Margate earlier in the day.

Despite the defeat, Horsham remain in third, with another enticing clash to come when we host bitter rivals Lewes on New Year’s Day.

An impressive 937-strong crowd braved the elements but there were few chances of note in the opening period.

The visitors had their first opportunity in the 13th minute when Sparks drove forward down the left before feeding in the overlapping Chris Smith whose ball into Rob O’Toole squirmed out to Sparks but the full-back’s strike fell wide of the post.

The Sussex derby stepped up to it’s billing with more robust challenges beginning to fly in and Parsons was booked for a late tackle on Sparks with the latter also booked for dissent.

Horsham were fortunate not to go a goal down on the half-hour mark when Dyett was robbed of possession on the edge of the box as Reece Meekums was sent through on goal but the marksman skewed his shot wide.

Sparks’ earlier yellow card would come back to haunt him after Jasper Pattenden clipped a brilliant diagonal pass to Parsons who, through on goal, was cynically pulled back by Sparks with the referee giving him his marching orders with a second yellow.

The pack was shuffled in lieu of the sending off with Shelley replacing Smith to sure up the backline but it wouldn’t take the hosts long to break the deadlock after the break.

Four minutes after half-time, Parsons broke through and brought the ball onto his right foot before hitting a shot to the right of Bentley.

Thinking the effort would go to his left, the ‘keeper was caught out as he slipped while making a recovery with the ball left to trickle agonisingly over the line.

Will Miles’ over-hit back-pass caused more trouble as the young stopper was forced into a making a haphazard clearance straight out to Meekums with the winger earning a free-kick from his pressure.

Bentley palmed away Starkey’s resulting set-piece while Harry Mills had a rare chance when he galloped down the left but his low-angled strike was easily collected by Carl Rushworth.

Rushworth was called into action once again when he flapped at a brilliant JJ O’Sullivan free-kick but any chance of an unlikely comeback was made impossible when Dyett was sent off for a rash challenge.

The Mackerels doubled their lead with five minutes remaining after Shelley, so typically calm under pressure, had a moment of madness when he failed to clear his lines as Pearce capitalised on his uncharacteristic error before dinking over Bentley.

Adam Hinshelwood’s side sealed the three points with a well-worked move when Ricky Aguiar took two covering defenders out the game with a cheeky backheel into Meekums who slid the ball across to Pearce who finished comfortably first time. 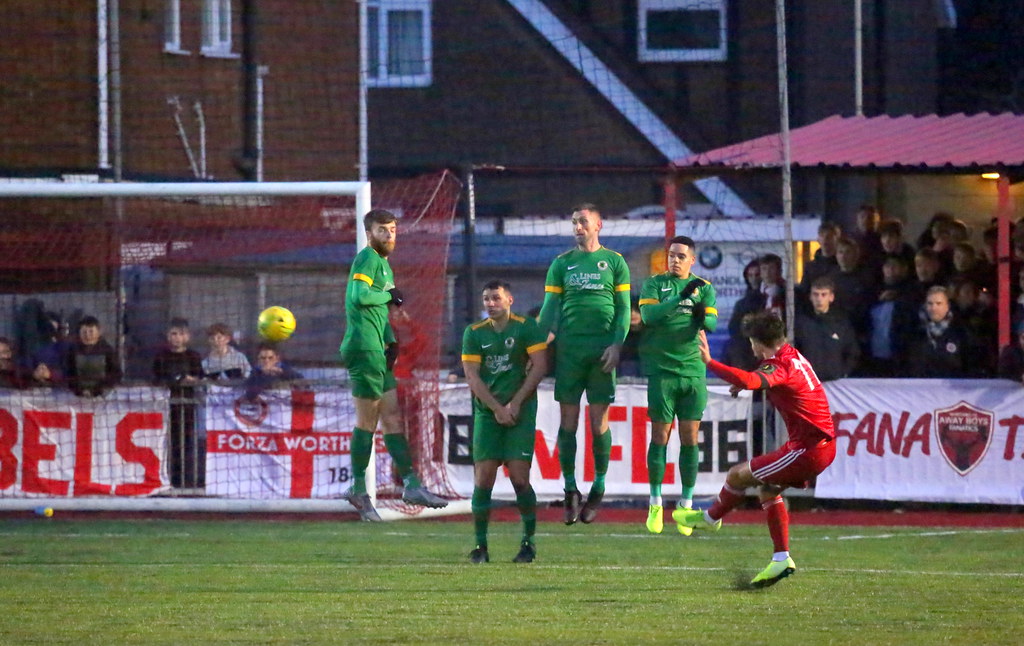