Horsham’s poor form away from home continued with a 1-0 defeat at lowly Merstham as The Hornets’ play-off hopes took yet another dent as Dom Di Poala’s side put in another indifferent display in Surrey.

The Hornets may well continue to sit pretty in Third, and few will argue against the notion that the season so far has seen Horsham defy expectations and overachieve, but there is a now a possibility that Di Paola’s side are at risk of falling out of the play-offs altogether having enjoyed a blistering first half of the campaign that saw us keep pace with the league leaders a couple of months ago.

Perhaps more ominously, was that this was a defeat to a side who had lost four out of their last five, and who had been thrashed 6-1 away at Worthing the weekend earlier. In fact, this was a side who had conceded the most amount of goals in the league, and were just two points off bottom going into this fixture.

That is not to take anything away from The Moatsiders, who punished a sloppy first half grabbing the decisive goal from Calvin Ekpiteta on 31 minutes, while they defended in numbers during the second period, successfully stifling Horsham who huffed and puffed but ultimately lacked the cutting edge as Merstham held on for what may prove to be a vital win in their quest for survival.

With Horsham kicking towards the setting sun, the first chance came on ten minutes as a long ball bounced kindly for Greg Cundle who broke forward, but with goalkeeper Matte Pierson rushing quickly off his line, the striker’s prod towards goal was well blocked by his legs.

Later on, Will Miles looped a header at goal for Pierson to claim easily, but at the other end, Merstham reminded the visitors that they posed a threat themselves when they won a corner. The delivery caused mayhem inside Horsham’s box, as Harvey Sparks chested the ball off the line while teammate Steve Metcalf hooked clear.

However Horsham failed to learn their lesson, and on 31 minutes conceded what turned out to be the eventual winner. The Moatsiders found success on the left wing through James O’Halloran who crossed into the box, he found Ekpiteta 12 yards out who found time to switch the ball onto his right foot, and took advantage as Horsham failed to close him down, clipping in with a tidy finish.

Horsham should have been level 11 minutes later. A fantastic knock was sent over from Gary Charman – making his 600th appearance for Horsham – his ball fell into the path of Sparks who rushed into the box taking a delightful touch to carry the ball on, but he failed to apply the finish, firing across goal and wide when he should have found the back of the net.

With less than a minute to go before the break, Horsham’s famous Lardy Army behind the goal made a strong appeal for a penalty when Rob O’Toole headed into the box, Metcalf looked to connect, but found himself hitting the turf under pressure from skipper James Richmond, who cleared with a towering header.  Merstham counted immediately from the clearance, with the pace of Shola Ayoola causing problems as Horsham struggled to get back, but despite managing to hold off a challenge, George Bentley rescued the situation coming off his line to bravely smother at his feet.

With the objective to get back into the game, Di Paola decided to make his first change just five minutes into the second half, throwing on Charlie Harris for Tourean Roberts but still Horsham laboured. Despite the home side getting deeper, Ayoola managed a low shot that Bentley easily gathered yet for The Hornets, testing the goalkeeper was proving more problematic as Merstham began to defend in numbers, Lea Dawson frustratingly finding himself crowded out on the edge of the box as his shot was immediately shut down.

A decent bit of play from the visitors saw O’Toole chest down a long ball and flick on to Sparks, who returned the ball back to him, but his curling effort from 20 yards left a lot to be desired as it went well wide.

Horsham were indebted to Will Miles on 65 minutes to avoid falling further behind when he raced back to produce a brilliant last-ditch tackle on Ayoola from six yards out, but despite Ayoola somehow managing to retain possession, he blasted wide across the face of goal from the narrowest of angles.

Harris then turned his maker and clipped a fortunate pass through to Cundle, but once again, Horsham failed to test Pierson who gathered easily.

The biggest chance for Horsham then came with less than 15 minutes remaining. Substitute Lee Harding finding success down the left wing as he passed his man, he drilled in low into the box, and in a panicked clearance, full-back Luke Ige throw out his leg and smashed the ball against his own bar, while the ball bounced down off the line as Merstham finally cleared it away. It was indeed the stroke of luck the home side needed.

With time ticking down, keeper Pierson earned himself a yellow card for perpetually time wasting at every opportunity, but despite an additional six minutes of injury time, there was no way through for Horsham as Merstham held on.

Report by Matt Dale
Match photos (below) by John Lines 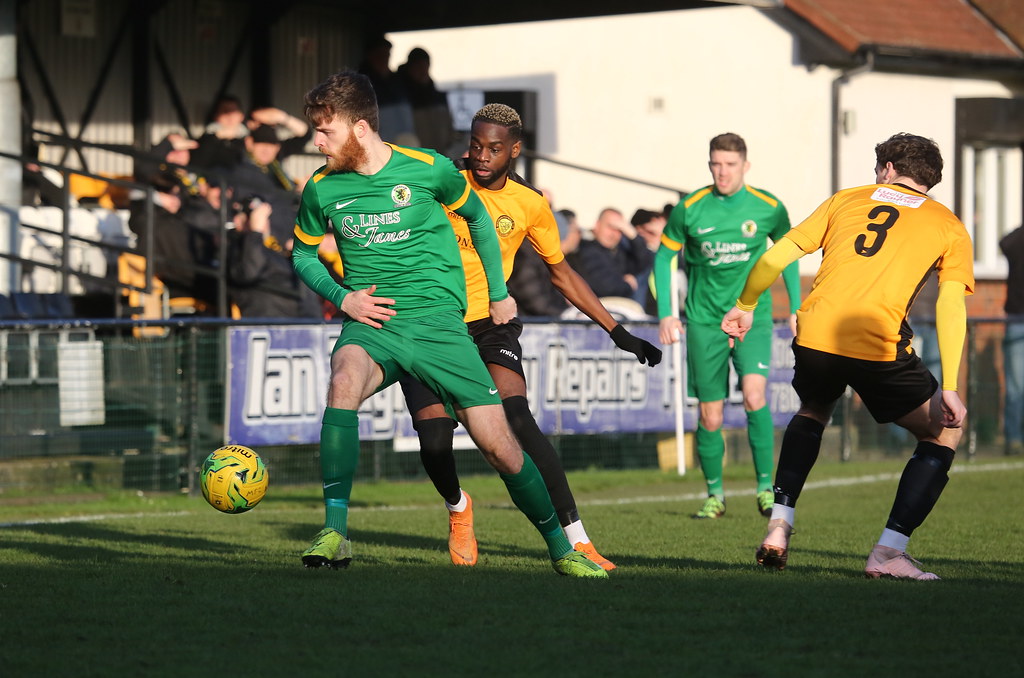