Mid-table Margate showed up to show Horsham that there is no room for complacency at the top of the table, as they fell to a 0-3 home defeat as Dom Di Paola’s side put in a disjointed display at The Camping World Community stadium.

Ahead of the game, Horsham boss Dom Di Paola spoke of how he felt Margate were sure to start climbing the table soon enough, but what he probably meant was that it wouldn’t include humbling his side.

Two weeks previous, at Potters Bar Town, it could have been argued that The Hornets were not at their best despite coming away with all three points, and despite having last weekend off Dom Di Paola’s squad lacked sharpness as Margate picked Horsham off in front of a new record home attendance of 747 at their new home.

The Blues took the lead with ten minutes remaining of the first half, when Noel Leighton pounced on a ricochet inside the box and slotted beyond George Bentley, but despite a brief period in which Horsham threatened to draw themselves level, they found themselves further behind when Bentley pushed Kieran Monlouis’ strike backwards into his net when he should have made a routine stop.

And it got worse for The Hornets when Adem Ramadan added a third to give the visitors an emphatic win against the league leaders, who stay top on goal difference ahead of Folkstone Invicta by a single goal.

Horsham began the game brightly, as Kieran Pamment whipped in a dangerous free kick early on that curled into the arms of visting goalkeeper Joe Tupper, and on just five minutes, striker Chris Smith had a good chance to latch onto a clever through ball, but he was well marshalled by Blues skipper Reece Prestedge who steered the ball from him as Tupper mopped up the danger.

The Hornets looked for success on their right flank as Pamment drove forward on a strong run looking to evade his marker, however he took an extra touch inside the box that narrowed his angle and hit low directly at Tupper who made a comfortable save.

It was then the turn of the visitors to bring the game to Horsham, Keddell Daniel ran at Horsham’s defence who backed off, the midfielder saw a chance to shoot, but his effort was weak and rolled wide along the turf.

Horsham felt they had claims for a penalty when Smith fell to ground under a challenge from Noel Leighton, the home side’s appeals waved away by referee Mr. Alex Bradley who adjudged that the Blues number nine was simply stronger.

The visitors should have taken the lead on 29 minutes. Prestedge was allowed a free header inside the box, however he flicked it backwards for a teammate rather than go for goal himself, and when Harvey Sparks mis-hit his clearance, Margate failed to take advantage as Horsham scrambled it clear.

They wouldn’t make the same mistake again. Six minutes later, Margate were in front thanks to some quick reflexes from Leighton who capitalised as the ball bounced off Harry Mills into his path, and the striker slotted into the bottom left corner with Horsham stuttering.

Horsham nearly found an immediate equaliser, Lea Dawson rose highest to meet Pamment’s deep corner, and he came agonisingly close as he shaved the top of the crossbar and sent the ball out for a goal kick.

Tupper would ensure his side took the lead into the break when he climbed to gather a looping header from Jack Brivio.

Horsham’s best chance of the game thus far came within a minute of the restart. Smith with his back to goal swivelling and shooting low down towards goal, drawing a super diving save from Tupper who saw the shot late and got a strong hand to deny him as his defenders booted clear.

They then went even closer as the ball was pinged about inside Margate’s box resulting in a frantic block on the line as Di Paola’s side began to exert a little bit of pressure with creative outlet Charlie Harris being introduced in exchange for Brivio.

But despite beginning to grow into the contest, Margate doubled their lead with a little help from a howler from George Bentley. Yes, Horsham’s defence probably allowed Kieran Monlouis too much space and time to fire at goal from 20 yards out, but despite Bentley appearing to have it covered with a routine save, he instead managed to push the ball backwards into his own net.

There was little Bentley could do about Margate’s third as Horsham crumbled at the back allowing Daniel to stride forward, work his way past Sparks, round Bentley and lay off to Adem Ramadan who netted from close range.

With Horsham dead and buried, it was left for Margate to see out the remainder of the game as both sides made a flurry of substitutions and The Hornets succumbed to their third league defeat of the season.

Horsham visit Littlehampton Town in the Sussex Senior Cup on Tuesday evening, before having the chance to put some breathing space between ourselves and second place Folkestone Invicta next Saturday when we head to Cheriton Road in a top-of-the-table clash. 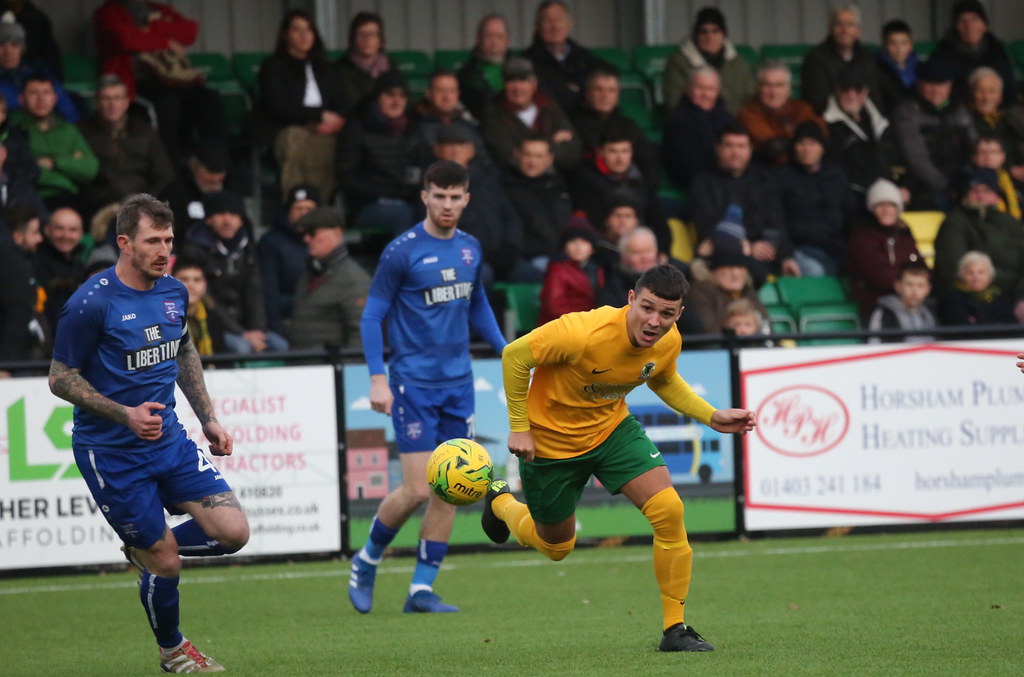