Horsham’s unbeaten start to the season continued with a much-deserved victory over old foe Lewes, who endured a miserable afternoon in front of their own supporters.

With just a single point to their name after four matches ahead of this game, the Rooks are struggling to live up to their pre-season billing as one of the fancied sides and, although they were twice denied by the frame of the goal, few would argue that Horsham fully merited the victory that takes them up to sixth place in an Isthmian Premier Division table now propped up by their East Sussex rivals.

The Hornets made two changes to the side that started their Emirates FA Cup tie at Tower Hamlets 48 hours earlier, with Joe Shelley and George Hayward replacing Steve Metcalf and Alex Kelly, while Will Miles and Harry Mills had recovered sufficiently to take their place in the line-up despite appearing to suffer from concussion in that 6-1 weekend success.

On a blisteringly hot afternoon it was no surprise that the game took a while to get going, although the visiting Lardies were quick to go through their vocal range in the shade of the covered end terrace. It was from a Horsham corner that either side got their first sight of goal but it was the hosts – sporting their change strip of all blue – to whom the opening chance fell when the set-piece was cleared and Dayshonne Golding, perhaps the pick of the Lewes players, raced away before squaring the ball across the edge of the area where Michael Dome-Bemwin lashed a shot wildly over the top.

A miscued cross by Inesh Sumithran gave George Bentley an uncomfortable moment in the Hornets’ goal as he used every inch of his reach to tip the ball behind for a corner and at the other end his opposite number, Nathan Stroomberg, stood up well to deny Chris Smith from scoring with an angled drive after the striker had been put clear by an overhead flick by Hayward.

With no let-up in the heat, the match was stopped for a water break just after the midway point of the half, suggesting that temperatures had reached thirty degrees, and on the resumption Hayward had a half chance to score when he met a bouncing ball with his head but without the desired power to beat Stroomberg. Next it was Smith’s turn to try his luck from close range but his shot was blocked by Frankie Chappell on the corner of the six yard box.

A poor clearance by Zac Fagan, from a Zack Newton throw, saw Lea Dawson badly off target with a first time shot before a brief moment of indecision in the Horsham penalty area nearly led to Lewes taking the lead. Hayward struggled to get control of the ball, as Golding fired the ball in from the left, and had to be bailed out by Charlie Harris in the nick of time as a Lewes player darted in to take advantage.

Lewes’ next chance came ten minutes from the break and was fortunate in its construction, with former Hornet Kieran Pamment’s misdirected shot somehow finding its way to Golding on the far edge of the penalty area and when the leggy number ten cut inside, Mills was well-placed to block the shot.

The first half had been a story of brave defending from both sides and this was in evidence once more when Tom Day threw himself in the way of a Smith drive. However, Horsham spurned two golden chances to take a half-time lead in the closing moments. The first came when Harris’ searching pass sent Newton away down the right and his inviting low cross looked set to be gobbled up by Smith but, racing in between two defenders, he side-footed wide from ten yards. Then Smith became provider when, put clear by Newton, his cross was tailor-made for long-time striker partner Kieran Lavery who, unmarked, inexplicably missed the ball from six yards out.

Any fears that Horsham’s profligacy might prove costly were dispelled just 22 seconds after the restart. Lavery’s pass was dummied by Smith to find Hayward racing clear to clip the ball confidently over the exposed Stroomberg, putting the visitors one up and prompting yet more singing from behind the goal. Yet Lewes almost hit back immediately when, just two minutes after going behind, a free-kick by James Hammond was tipped on to the post by Bentley and, soon after, Ola Adeyemo glanced a header wide from Sumithran’s cross.

It was a good response by the home side but they were close to going further behind when Smith twisted and turned away from Fagan before crossing into the box where Newton hooked a high, bouncing, ball over his head and just over the crossbar. The Rooks’ chances of salvaging at least a point from the game were dealt a blow, less than a minute later, when Chappell followed through with a clearance and caught Newton high on the shins, an act that saw him dismissed by referee Alex Blake.

Within two minutes Horsham exacted even greater punishment by doubling their lead. A Harris corner from the left had to be tipped over at his far post by Stroomberg and, from the resulting set-piece, claims for a foul on Miles were forgotten as Shelley rose superbly to send in a thumping downward header that went through the goalkeeper’s legs.

Yet again, though, the woodwork came to the visitors’ aid when, after a scramble in the box, the ball fell for the unmarked Hammond whose right-foot strike got the better of Bentley but not his left hand post. It was becoming an afternoon to forget for Hammond, who then headed a terrific cross by Pamment’s over the bar and the former went it alone in Lewes’ next break only to strike a soft shot straight at Bentley.

Rob O’Toole and Alex Kelly were sent on for Hayward and Harris, with the Rooks withdrawing Adeyemo and Sumithran in favour of ex-Horsham striker Dean Bown and Stefan Ilic, while a second stop for drinks brought another much needed break in play for the players. When play got back underway it looked as if Smith might add a third goal for the Hornets when Harvey Sparks broke into the area but his low ball across the face of goal produced a timely interception by Day.

Golding still looked full of running for the hosts and when Mills lost possession in front of the stand, the Lewes wide man raced on towards goal only to send the ball harmlessly wide of Bentley’s right-hand post. The hosts were finishing the game strongly, if not convincingly, and Golding headed Dome-Benwin’s cross too high, with O’Toole doing the same to a Mills assist at the other end.

With the match now into added time, Horsham had two further chances to extend their advantage when they were denied what looked a clear penalty as substitute Jared Rance appeared to be hauled down on the goal line by Dome-Bemwin and then when Lavery’s shot was only half stopped by Stroomberg and Fagan had to clear from almost on the goal line with Newton waiting to pounce. 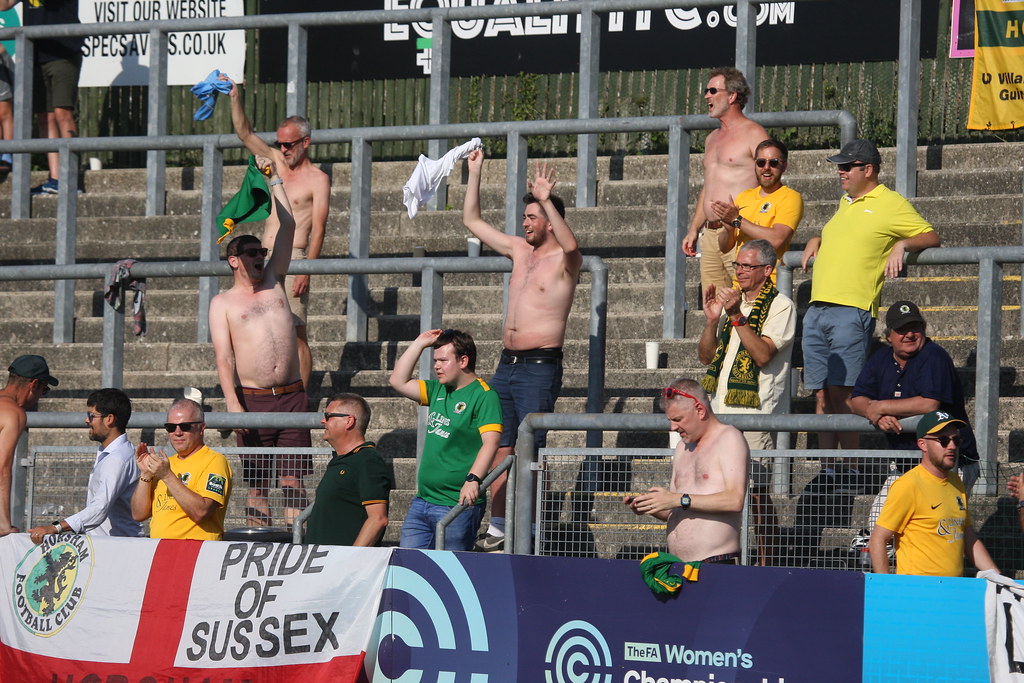