Horsham got 2020 off to a flyer as they breezed past Sussex rivals Lewes thanks to a 3-0 win at The Camping World Community Stadium on New Year’s Day.

Matches between The Rooks and The Hornets have always provided entertainment and goals, with more recent fixtures over the last few seasons seeing Horsham emerge victorious more often than not. Despite being widely tipped to do well this season, Lewes entered the game in 16th place, while Horsham sat in third. Defeat at Worthing on Boxing Day meant Horsham’s campaign and hopes for a second successive promotion were in danger of evaporating as the new year got started, and how Lewes would have loved to take The Hornets down a peg or two.

However Dom Di Paola’s side responded well to their Boxing Day defeat and were worth the win thanks to clinical finishing from Joe Shelley who set the course for victory early on with a thumping header to put his side in front. The main talking point however will be Rob O’Toole’s spectacular goal four minutes from the interval as he converted from Charlie Harris’ cross, launching himself into a bicycle kick and finding the net just inside the box. A classy display from Harris ensured he collected a second assist early on during the second half when his free-kick was nodded into the net by captain Jack Brivio to all but end the contest.

Despite a slow start, Horsham had the first chance of note on seven minutes when Charlie Harris sent in a low free-kick. The midfield powerhouse might have not got enough purchase on the ball, but his delivery managed to evade everyone although not goalkeeper Nathan Stroomberg who got his gloves on the ball for the first time of the afternoon.

Five minutes later, the Rooks shot-stopper would be picking the ball out from his own net as Horsham won a free-kick wide-right. Harris again sent the ball over into the box where it was nodded back across goal by Will Miles, with the ball loose, in swooped Joe Shelley to head home.

The Rooks attempted to force an equaliser soon afterwards when Alex Malins tried to steal in at the back post as he looked to convert a deep cross into the box, but despite getting a second chance from the rebound, Horsham stood firm with bodies on the line to preserve their lead.

With Horsham looking to press home their advantage, Jack Brivio collected some 30 yards from goal, took a couple of strides and unleashed a decent attempt from range that narrowly went wide. Taurean Roberts then collected a loose ball as Lewes reacted slowest, the midfielder taking a touch and firing straight down the middle of Stroomberg’s goal, who palmed his attempt over the bar.

Lewes’ Kayne Diedrick-Roberts saw a rasping low drive well blocked by Miles, but Horsham soon doubled their lead thanks to a moment of sheer brilliance by Rob O’Toole.

Everyone knows that the former Saltdean United striker knows where the back of the net is, but what was most impressive about this goal was that he had his back turned against it. Charlie Harris collected the ball out wide and delivered another fine cross, O’Toole then appeared to defy gravity as he hung in the air and launched an astonishing bicycle kick, timing the manoeuvre with precision to offer a strong contender for goal-of-the-season.

It could have been three just before the break as well when Roberts sent over a dangerous cross into the box that was met by Shelley, but the experienced defender was unable to adjust his position and headed over.

With the second half barely underway, and with fans still talking about THAT goal, Horsham put the game to bed with 52 minutes on the clock. Once again, Harris stood over a freekick in a wide area and once again, his delivery was perfect. Lewes’ defending however was shoddy allowing for an unmarked Brivio to rise up and power in a bullet header to put Horsham in total control.

With Lewes looking like a defeated side, Horsham looked to add a fourth as Harris managed to get too much underneath a dropping ball as he headed over the bar.

At the other end, Lewes’ afternoon was summed up when skipper Frankie Chappell flicked a header well over from substitute Jason Dawson’s cross despite being unmarked.

Horsham simply needed to manage the game to see it out, but the ever instrumental Harris went close to getting a goal of his own when he sent in a low cross-cum-shot across the face of goal with no one on hand to convert and as the clock ticked down, the visitors looked for a scant consolation through full-back Leon Redwood who hit a desperate looking shot that deflected out for a corner which Horsham dealt with.

The Hornets have the chance to tighten our grip on a play-off place on Saturday when we visit Hornchurch in a clash between 3rd and 4th respectively. 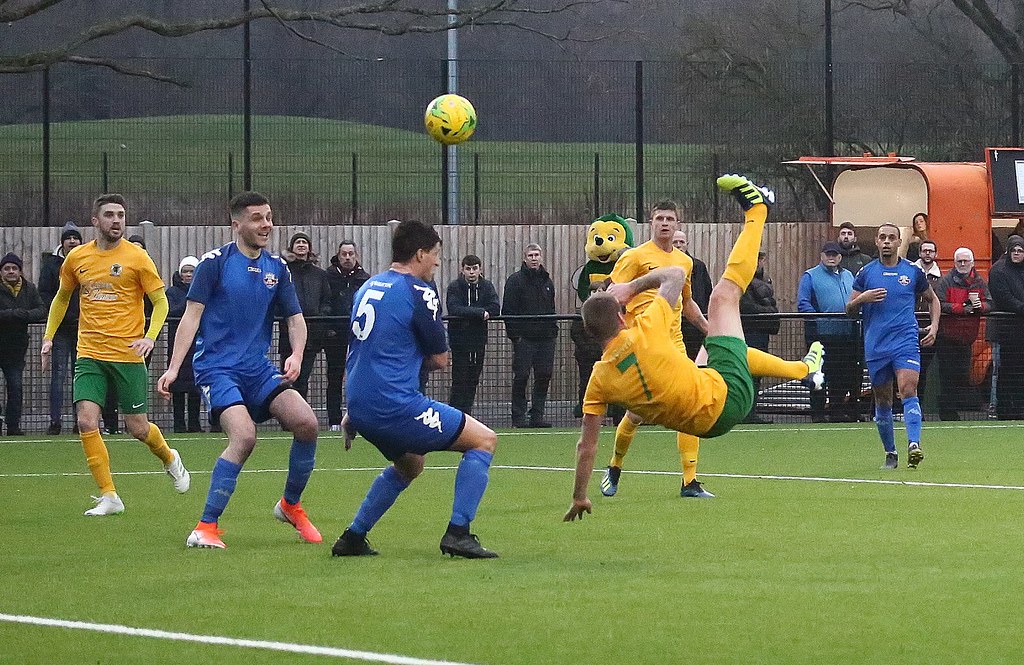