Dom Di Paola will need to address his side’s away day form if they are to continue to push for a place in the play-offs come the end of the season, as they fell to a 2-1 loss at Hornchurch this afternoon.

The Hornets boss stated in his pre-match preview that he wanted his side to ‘kick on’ from what he described as an ‘amazing effort’ during the first half of the season. Losing a third game in a row away from home wouldn’t have been what he had in mind. Granted, we may have lost those games at teams within the top five of the division, but The Hornets will certainly want to pick up more points on the road between now and April, as we suffered a damaging defeat to the fourth placed Urchins, who remain two points behind ourselves, albeit with three games in hand.

This was indeed a hard-fought game on a scruffy pitch but few would argue that the hosts weren’t worth the win. From the off they bullied The Hornets and made sure they let them knew they were in a contest fighting back from a goal down – the first time Horsham had lost after scoring the first goal since defeat away at Poole Town in October 2018 in the FA Cup. Greg Cundle opened the scoring with a fine solo effort on 23 minutes, but four minutes later, Hornchurch levelled with a great header from close range, and they scored the winner midway through the second half thanks to Chris Dickson.

Arguably, Horsham were lucky not to go a goal down in just the third minute. A corner into the box was glanced on and nodded in by Dickson, but the celebrations were cut short by the linesman’s raised flag, a decision that appeared harsh on the hosts.

The sticky pitch perhaps meant the aerial route was to be preferred, when ten minutes later, full-back Mickey Parcell swung in a dangerous freekick from a wide position, Matt Johnson powered a header towards goal, but goalkeeper George Bentley got down well towards the base of the post to produce a good stop.

Bentley then plucked out a poor cross from Dickson after the forward made a powerful run on the flank, but it was Horsham who drew first blood.

A maundering run on the right wing saw Cundle take the ball forward as Hornchurch stepped off him, and as he passed his marker he shot low down into the far corner to score his first Horsham goal.

The lead lasted just four minutes. The net being breached for the second time directly from a corner but this time it counted. The delivery came from Ronnie Winn and Ricky Hayles ensured he got in front of Bentley to bury his header from close range.

With tensions simmering, a late challenge on Charlie Harris earned Parcell a yellow card which he might have avoided if the players had refrained from getting their handbags out but with Jordan Clark also receiving a caution minutes later, both sides made it to the interval intact.

Hornchurch withdrew Daniel Uchechi for the towering presence of Marvin Morgan for the start of the second half, and the substitute very nearly made an instant impact when he met Clark’s deep cross into the box and headed powerfully at goal. However, Bentley was drawn into making a super save, pushing the ball over the bar.

Horsham supporters making the trip over the Dartford crossing then had a heart-in-mouth moment when Bentley rushed out of his box to deal with a potential mix up as Joe Shelley looked to be struggling to shield a loose ball with Morgan breathing down his net, but the former Brighton & Hove Albion Youth product hoisted away the danger.

Horsham’s defence continued to lose out to aerial balls from The Urchins, and once more Bentley was required to keep Hornchurch at bay, acrobatically tipping away another header by Morgan.

Tempers once again flared up after Bentley was unfairly challenged by Arthur Lee causing both sets of players to engage in a round of pushing and shoving and when things eventually settled down, both players received cautions for their contributions in the scuffle.

With emotions still high, Hornchurch found the winning goal in the 65th minute as Horsham’s concentration once more dropped off during another corner routine, the floated ball over being finished off by Dickson, who this time made sure he was onside.

Despite having plenty of time left to fight back, Horsham’s response was muted, as the hosts – in particular Hayles – kept their defensive discipline to nullify the visitors, with substitute Gary Charman bellowing out for his teammates to support the attack more as time ticked by.

With five minutes of injury time added on, the last hope to salvage a point came to Will Miles, but his well struck shot from outside the area was gathered comfortably by Joe Wright as The Urchins held on. 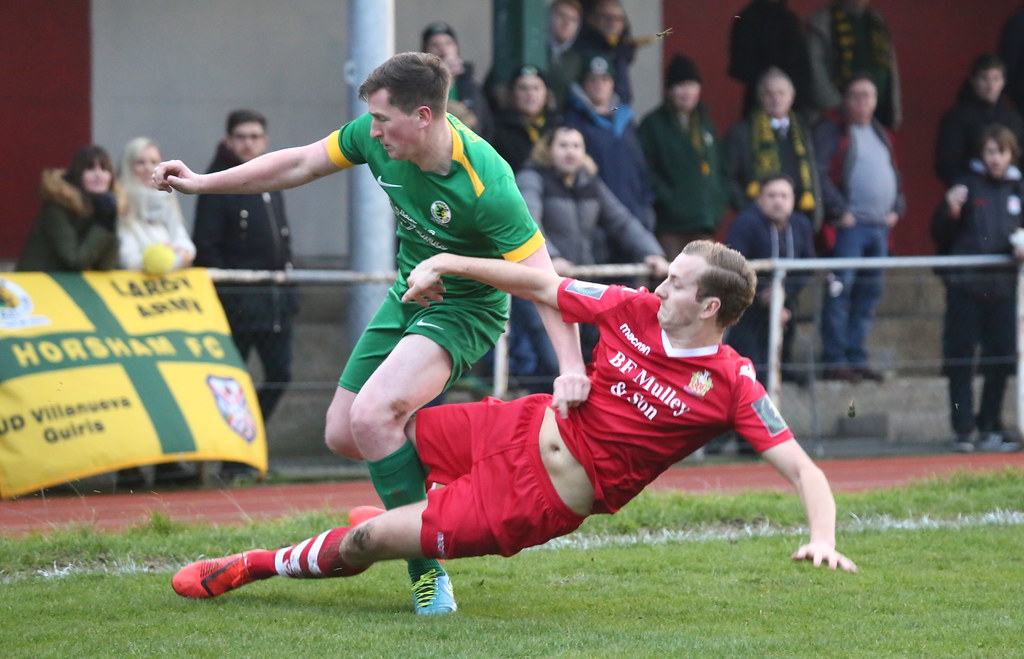