Kieron Pamment chose the perfect moment on which to score his first goal since his return to Horsham, curling in a stoppage time free-kick to earn the Hornets a last-gasp victory at rainswept Coles Park.

The winger’s goals were instrumental in securing the club’s passage back to the Isthmian League in his previous spell, but none could have been as dramatic as this latest strike that came just as the Horsham followers were grudgingly settling for a point. The travelling fans had bemoaned their luck after seeing their side spurn half a dozen good chances to put the game to bed but it was, ironically, from the least clear-cut opportunity that the winning goal came. A free-kick for a foul on substitute Joe Shelley, some 30 yards from goal, was swung in by Pamment and missed everyone before kicking up off the sodden surface and nestling inside the far corner of the net.

It was fair reward for the visitors after a terrific second half display that laid to rest their FA Trophy exit at the same ground seven days ago. Then an admittedly understrength side were comfortably beaten by three goals to nil but, despite seeing their early lead wiped out, they took the game to their hosts in the second half, survived a couple of scares in time added on only to clinch the points with the last kick of the game.

There were three changes to the side that started last week’s cup tie, with Pamment, Harvey Sparks and Dylan Merchant in for Steve Metcalf, Zack Newton and Gary Charman and, although Shelley was named to start, his late arrival meant Harry Mills kept his place in the heart of the defence. For the hosts, whose dreams of making it through to the first round of the FA Cup were ended by Yeovil Town in midweek, Olu Durojaiye, Stelios Demetriou, and Coby Rowe came into the starting line-up while their attacking quintet of Romoluwa Akinola, Jorge Djassi-Sambu, Chiduben Onokwai, Georgios Aresti and Michael Ademiluyi would no doubt have been looking to enjoy the sort of freedom they had been afforded seven days ago.

Then, as in this fixture, Horsham began brightly and might have grabbed a fifth minute lead when Pamment recycled a deep cross and clipped it back towards the six yard box where goalkeeper Valery Pajetat got a crucial touch to take the ball off Chris Smith’s head. A minute later and this time it was Pamment who was on the end of a move, thrashing the ball high over the crossbar after an O’Toole cross had only been half-cleared.

It was in keeping with the game, then, that the Hornets edged in front on nine minutes when a delightfully angled pass by Harvey Sparks sent O’Toole scampering clear of Konstantinos Alexandrou to go round the ‘keeper and stroke the ball confidently into the empty net. But Haringey might have levelled win two minutes when JJ O’Sullivan was penalised for a strong challenge, right in front of the dug-outs, and as the free-kick was pumped into the penalty box, two yellow-shirted players were within an ace of making contact.

But back came Horsham and when Harding came inside and offloaded to O’Toole, the big striker sent a low right-footer narrowly wide of Pajetat’s right-hand post. The Haringey goal had a remarkable escape from Horsham’s next attack when O’Toole was played into space inside the hosts’ penalty area and struck a low shot that was only partially saved by Pajetat. As the ball deflected invitingly up for Smith to head home from just yards out, Alexandrou somehow managed to get his knee to the ball, turning Smith’s goalbound header up on to the crossbar before completing a remarkable piece of defending with an acrobatic overhead clearance.

The pressure was maintained a couple of minutes later when a loose pass in midfield was snapped up by Harding, who set up Smith but his angled shot could only find the side-netting. Next it was Sparks’ turn to chance his arm when good work by Smith and Harding on the far touchline created the space for the full-back to fizz in a right-footer that went a foot wide of the far post. The chances continued to come and go, as Smith was within a whisker of getting a toe to Harding’s low near post cross, a rare O’Sullivan effort flew over the top from the outside of his boot, and then Jack Brivio’s thumping strike was well saved by Pajetat from a Harding corner.

Inevitably, Horsham’s failure to convert their chances came back to bite them on 31 minutes when some sloppy play on the edge of their own area ceded possession to Aresti, who lashed the ball low into George Bentley’s bottom left hand corner for the equaliser that was very much against the run of play. The goal gave Haringey renewed belief and they put Horsham under pressure for the remainder of the half. A simple ball over the top was latched on to by Onokwai, whose cross was pushed out by Bentley, and Aresti should have done better than to drag an effort wide of the target.

In a repeat of the move seen just moments before, Aresti’s long ball put Onokwai in the clear and this time he cut it back unselfishly to Akinola who blazed wastefully over the bar. Bentley’s goal was coming under severe pressure and a slip by Mills, on the edge of the box, saw him dispossessed by Aresti whose tidy pass nudged Onokwai through where he was denied by a brave block by the former Brighton U23 goalkeeper. It was a vital save, coming just a few minutes before half-time, yet came at a price as Bentley required lengthy treatment before being able to continue and see out the remainder of the half without being further tested.

The rain that had blighted the Trophy tie threatened to return at the start of the second half, eventually turning from light drizzle to a torrential and prolonged downpour, and as the visiting supporters scurried for what shelter there was under the inadequately tin-roofed terrace, they were grateful when Bentley’s near post save prevented Onokwai from putting the hosts in front.

Pamment was denied a shot on goal by Alexandrou, who stuck out a leg to block his attempted strike, and then a high hanging ball out of defence was pounced on by Smith, outpacing the defenders to fire in a low shot that was blocked by the ‘keeper. An even better chance was to befall Horsham’s leading marksman when O’Toole dummied a cross from the right but Smith, alone and on the penalty spot, sent his effort too close to the imposing Pajetat who threw himself to his right to make the save.

It was encouraging stuff from the Hornets and although Harding’s low strike was comfortably saved by the goalkeeper, it kept the visitors on the front foot. But Lady Luck seemed to have deserted them when another Harding strike, from 30 yards, struck Smith on the back and looped on to the roof of the net. By now the rain was relentless and, backed by a strong and swirling breeze, Pajetat had to watch a huge clearance from Bentley all the way before fielding it just inches from his goal-line, with some of the travelling fans claiming that the Cameroonian stopper had carried the ball into his own goal.

Although by no means a malicious or feisty contest, the cautions were beginning to tot up in the testing conditions and Djassi-Sambu became the fifth name to enter referee Daniel Simpson’s notebook for a foul, from which the free-kick was struck low and under the wall by O’Toole but straight at the ‘keeper. But Horsham’s profligacy in front of goal meant that Haringey remained a threat and they went close to going in front on 68 minutes when Akinola shot inches past the far post.

With 20 minutes to go the rain mercifully began to relent but Smith’s frustrations in front of goal continued when he was put through by Harding’s inviting pass but failed to beat Pajetat from the angle. Horsham’s next attack produced a patient build-up that ended in Brivio’s driven effort going too high to trouble the home goalkeeper and then O’Toole headed an O’Sullivan free-kick wide. Brivio was again out of luck from another Harding corner, getting up well to power in a header that struck Mills in front of goal and rebounded behind for a goal-kick.

As the match entered stoppage time it was suddenly Haringey who looked the most dangerous and when Bentley took a heavy touch to Mills’ strongly hit back pass, Akinola was in sharply to thrash the ball goalwards only to see it strike Bentley’s face and cannon away to safety. But the home team went even closer when Aresti clipped the ball on the blindside of captain-for-the-day Merchant who recovered in the nick of time to perform a miraculous goal-line clearance from Dimitrios Froxylias’ neat back heel.

Coby Rowe dropped a late header on to the roof of Bentley’s goal but then came that late Pamment strike to leave the Hornets celebrating another three points that, with Folkestone Invicta draw at Carshalton Athletic, takes them to within two points of the league leaders ahead of next Saturday’s visit of Bowers & Pitsea. Before that, though, Dom Di Paola will be hoping to steer his side to victory at Newhaven on Tuesday night for what we all hope will be the start of a successful, and long overdue, Sussex Senior Cup campaign. 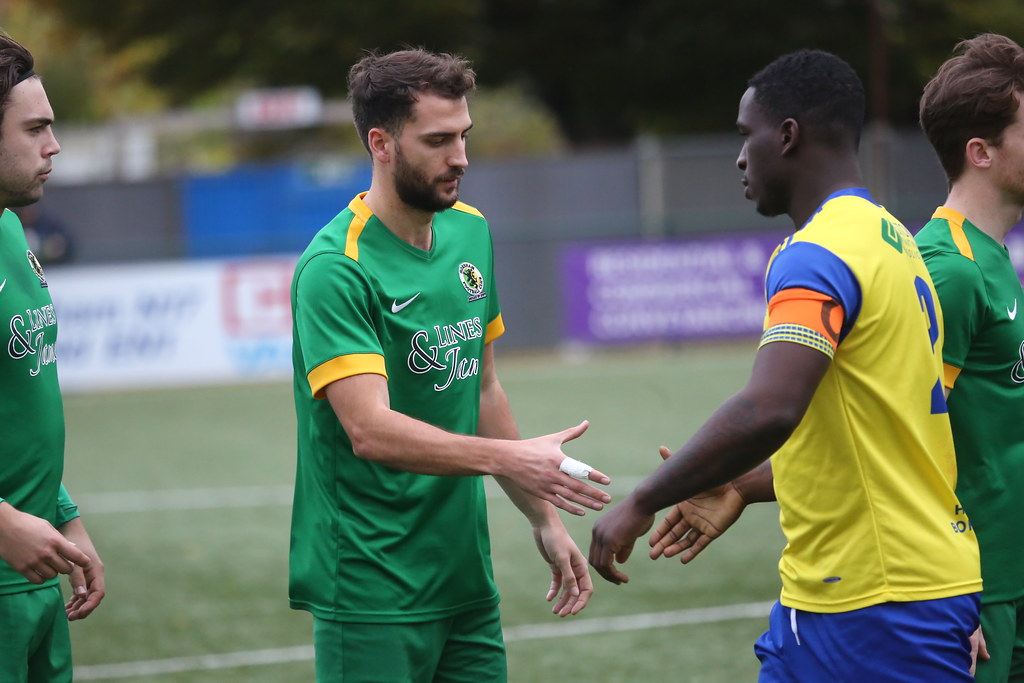