Horsham slipped down to third after defeat at Folkestone Invicta thanks to a 2-1 victory at Cheriton Road as Dom Di Paola’s men suffered back to back league losses for the first time since the start of September 2018.

Horsham have done incredibly well to continue to take last season’s form into this campaign, and despite the game being a top-of-the-table clash with Horsham being leapfrogged earlier in the week by The Stripes, the Horsham manager warned before the game that supporters needed to temper their expectations after last weekend’s surprise 0-3 loss at home to Margate.

In the past, the gaffer has occasionally tended to downplay his side’s heroics, preferring to be ensure his side get over the finishing line before getting carried away, but knowing his side faced a tough test against a side widely tipped amongst the favourites for promotion this season, it was perhaps understandable that he felt his depleted squad would have a test of character down in Kent.

Di Paola and the Hornets fans who made the long trip down to Kent would be left to rue a combination of bad luck, poor judgement and an inability to take chances, as they started brightly in the opening half hour, with Chris Smith missing an open goal during the first half. George Bentley produced a fantastic save from the penalty spot to deny Isa Jackson, but the hosts took the lead from another penalty that Jackson would convert. Joe Shelley then bundled into his own net, before Gary Charman gave his boyhood club hope of a comeback when he nodded in to give the hosts a nervy final ten minutes as they held on.

Horsham showed early impetus in just the second minute through Kieran Pamment when he drove forward and clipped a low effort wide, across the face of goal, but Horsham blew what should have been the perfect start three minutes later.

Home goalkeeper Harry Newcombe kicked the ball out short straight to Hornets striker Smith, who couldn’t quite believe his luck, he rounded the ‘keeper with a slightly heavy touch, but with a tight angle, he dragged his shot wide in front of the empty net in a stunning miss.

Invicta’s ‘keeper again looked suspect when he fumbled at a corner he should have claimed, and as the ball fell to Jack Brivio, the midfielder’s swipe at goal was cleared on the line as Folkestone put bodies on the line.

On 17 minutes, Invicta created their first shot on target through Ira Jackson who created space for himself inside the penalty area and got a shot away that was directly at Bentley who smothered low down, while Jerson Dos Santos hit a low, unconvincing effort along the turf later on.

Last season’s Joint Player of the Season, Harvey Sparks produced a moment of magic when he sumptuously pirouetted off his own flick on and sent in a low cross for Smith who stretched out a leg to bundle the ball into the net, but Horsham’s joy was immediately cut short by the raised flag with Smith having strayed offside.

At the opposite end, Jackson found himself in a good position but blasted woefully over when he had more time at his disposal, but the Invicta striker really should have put his side in front moments before the interval. With Jerry O’Sullivan playing him onside, Jackson latched onto a pumped ball down the right flank and bored down on goal, he side-skipped O’Sullivan’s challenge leaving him with just Bentley to beat, but the Hornets shot-stopper proved big and strong making a crucial save to keep the scores level.

Referee Mr. Lee Dyson would certainly be kept busy for the second half as he awarded the first of his two penalties just seven minutes after the restart. Jackson felt his heels clipped as he powered forward inside the area and despite stumbling trying to stay upright, he tumbled into the ground as the referee pointed to the spot. Dos Santos stepped forward to do the honours from the spot but saw his well taken penalty saved by a low dive to his right-hand side by Bentley.

Perhaps then it was the thought that his goalkeeper had saved three out his last three penalties for Dylan Merchant’s rush of blood to the head minutes later. The normally dependable defender challenge on Dos Santos was rash and poorly timed as he lunged in from behind just inside the edge of the box, sending the Invicta Number 10 flying. Jackson would make no mistake from the spot, daring to send Bentley the wrong way as he once again fired towards the bottom left corner.

Looking to grab a second goal to secure the points, a lovely dinked ball over the top sent Alfie Paxman on a darting run forward where he sent in a low ball that Bentley smothered, and then moments later, Josh Vincent pulled his diving header narrowly wide at the far post.

But the hosts would indeed get their two-goal cushion. Steve Metcalf could not contain the menacing run of Dos Santos who ghosted behind him and turned him inside out, clearing his way to the byline, his low ball into the box was hoisted back out to him, and his second attempt into the six yard box was turned into his own net by Joe Shelley sliding in.

However club legend Gary Charman rolled back the years when he gave Horsham hope ten minutes from the end, heading into the roof of the net from close range for his 167th club career goal – his last goal for the club coming in October 2014.

With Horsham pouring men forward in search of an equaliser, Folkestone attempted to finish the game off on the counter, as Dos Santos and Jackson linked up to utilise the space they found at the back, but Jackson pulled back wide of the post when he had the chance to wrap things up. Dos Santos then saw his deflected shot cannon off the foot of the post late on before being made to endure a flurry of Horsham corners in injury time with Brivio heading inches over the bar in the final minute of stoppage time.

Di Paola will look to pick his side up ahead of our home game next weekend against East Thurrock United.

Match photos below by John Lines 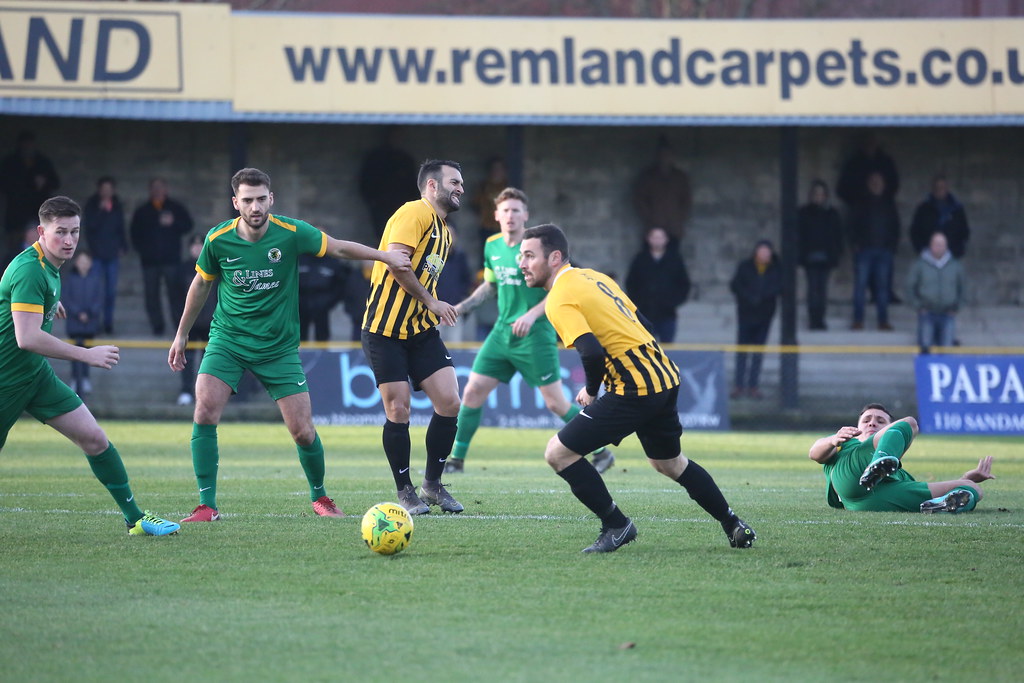