There was last minute drama at The Camping World Community Stadium as Chris Smith missed with his spot kick, deep into injury time, to send the Hornets to a 1-0 defeat against league leaders Folkestone Invicta. In an even contest, Horsham went toe to toe with the early season pacemakers but as the match looked to be heading for a draw, Invicta substitute Johan Ter Horst struck in the 79th minute to snatch all three points for the Kent side .

The Hornets started well and, on four minutes, created an early chance from a Harvey Sparks overlap down the left but his low cross into the box just evaded the outstretched boot of striker Chris Smith. Just after, the visitors had a chance of their own from a free-kick delivered into the box from the left but visiting full-back Josh Vincent ballooned the ball over the bar. With both teams keeping the ball well, it was not until the 25th minute that the next chance arrived. A good run and cross, from Horsham’s right back Jerry O’Sullivan, caused panic in their opponents’ box and, more by luck than judgement, the ball was deflected wide for a corner.

From the resulting set-piece, the ball fell loose to Horsham’s Harry Mills whose shot was on target but did not trouble Invicta keeper Henry Newcombe. On 41 minutes, dead ball specialist Charlie Harris fancied his chances from fully forty yards. His well-struck shot was seen all the way by the Invicta keeper but he spilled the ball out to the advancing Hornets striker, Zack Newton, but he was unable to capitalise on the chance. Just after that, Harris went even closer to gaining Horsham the lead. Picking the ball up 25 yards from goal, he took a couple of strides forward and unleashed a scorching shot that smacked against the bar. Just before the break the visitors’ number eleven, Kieron McCann, found himself free on the edge of the box and hit a low left foot shot that the Hornets’ George Bentley, the quieter of the two keepers, saved well .

Four minutes in to the second half, George Hayward broke down the left and put in an inviting low cross into the box but it missed the Horsham strikers and came to nothing. Just after, speedy Invicta striker Jerson Dos Santos, kept quiet in the first half, fired just wide from the edge of the box . On 55 minutes, Horsham manager Dom Di Paola decided on his first change, bringing on big striker Rob O’Toole for Hayward. As the game became a little scrappy, with both sides going more direct, Horsham had the visitors on the back foot with three consecutive corners, the last of which was delivered long to the back post which was met by O’Toole but he put the chance over the bar.

Shortly after that, Invicta’s Scott Heard took a free-kick from the left. The shot was on target but keeper Bentley punched the ball clear. In the 75th minute the Folkestone boss, Neil Cugley, made his first substitution when he sent on Ter Horst for midfielder Sam Hasler he made an immediate impression, meeting a cross from the left but put the chance just over the bar when perhaps he should have scored. However he made no mistake when his next opportunity came along, three minutes later, when, latching onto a through ball, he sent in a low shot that Bentley parried but could not hold onto, giving Ter Horst the easy chance of putting the rebound into the net .

A last throw of the dice saw Di Paola swop Newton and Dawson for Lee Harding and Alex Kelly as the Hornets pushed forward in search of an equaliser. As the game looked to be drifting away from the home side, the game was to have its most dramatic finale. First, in the 90th minute, a long cross to the far post was just the chance that striker O’Toole normally gobbles up but this time he was unable to get over the ball to get his header on target and it went well wide of the goal.

But Horsham were to have one last chance! Literally as the referee was about to blow his whistle to signal the end of the game, a high diagonal ball was headed on for Smith, who controlled the ball neatly. But as he was about to shoot he was bundled over from behind and the referee did not hesitate – penalty! As the hushed crowd of just over 600 fans held their breath, Smith stepped up but agonisingly dragged his shot a couple of feet wide of the right hand post.

That was it, the referee blew to end the match as Horsham rather unluckily went down to their first defeat at the Camping World Community Stadium. 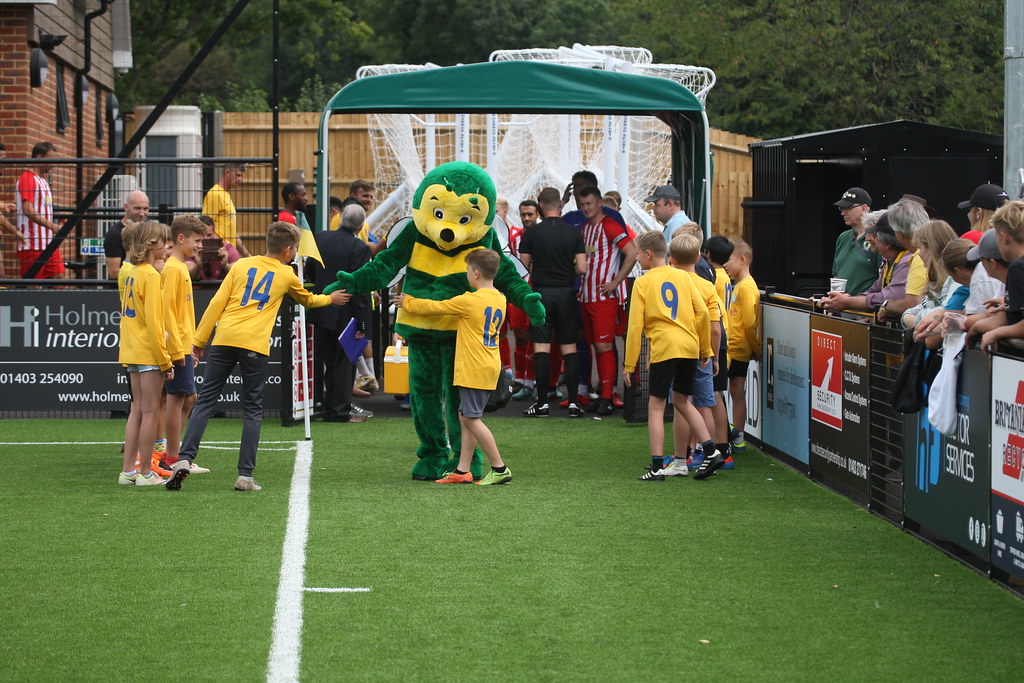