Horsham secured their first win of the season by springing a surprise on Enfield Town on their own patch to lay down a marker to the rest of the division as Dom Di Paola’s side said ‘we’re back!’ after a fine 1-4 victory at Queen Elizabeth II Stadium.

Enfield had enjoyed an excellent midweek by thrashing Bishops Stortford 5-0 ahead of this match, and thus Horsham fans who journeyed to North London were nervous that The Hornets could be in for a long afternoon. Yet after a tepid first half, Chris Smith drove the visitors in front and despite The Towners drawing level and threatening to go ahead after a dominant ten-minute spell, there was no way back for the home side when clinical finishes by Charlie Harris and Smith put Horsham firmly in control with Zack Newton grabbing his first goal for the club soon after.

The win ended a period of close to eight years since Horsham last won away from home in the Isthmian Premier Division. You have to trawl back through the archives to 27th August 2011 when Horsham beat Hornchurch 0-2 for the last time Horsham picked up three points on the road in this division. But while ultimately that was a victory that proved futile in a campaign that was the start of Horsham’s fall and subsequent rise back, it was clear that this win should be treated as anything other than a flash-in-the-pan – quite simply, this is a Horsham side rebuilt to stay put.

Enfield had the first chance of note after eleven minutes, when Junior Mubiayi’s challenge high up the pitch saw play turned over to striker Billy Bricknell who’s shot was deflected behind by a teammate.

Chris Smith’s cut back across the box was cut out by goalkeeper Nathan McDonald seven minutes later and with few chances on offer, Horsham’s half-hearted appeals for a penalty were waved away when Kieran Lavery went down softly inside the box under a challenge, but the referee Stuart Kyle quite rightly wasn’t interested.

Towners’ Dan Rumens then volleyed over the bar as The Hornets could only half-clear a freekick, but Horsham were offered their first real attempt on goal just after the half hour mark. Dead-ball specialist Harris stepped up at the edge of the D, and curled a decent effort low around the wall, but just inches past the post.

A minute later, Smith chased down a long ball and got fortunate with the bounce but his strike on the half-volley was easily claimed by McDonald. Harris then sent an ambitious effort woefully over the bar.

Meanwhile, right back Jon Muleba was proving a handful for Horsham’s defence as he was allowed to send in a dangerous whipped cross that somehow eluded both Bricknell and strike-partner Ken Charles but it was Horsham who broke the deadlock right on half time.

It was route one stuff, a long ball out from defence by Lea Dawson stretched the home defence, and as Smith snuck through the gap, he fired straight at McDonald in the air, the goalkeeper’s handling was poor as he parried upwards and behind him as the ball was allowed to bundle into the net.

Enfield Town began the second half in better shape and found an equaliser less than ten minutes after the restart when Muleba once again got away from his man down the right wing, and sent in an exquisite cross into the box. It could have been argued from Horsham’s point of view that goalkeeper George Bentley might have attempted to claim it, however Ken Charles took advantage to nod in at the far post from just two yards out.

The goal appeared to put Enfield Town into fifth gear as they began to apply some pressure on Horsham as their fans began to urge their side to find another goal to put them in front. Once such chance saw a header go wide, and as a spectator behind the Enfield Town goal returned the ball to Bentley by throwing it towards his chest, there was bemusement as the Hornets shot-stopper appeared to theatrically go to ground as the home supporters fumed over what they perceived to be time wasting.

With Bentley making a full recovery, he was soon tested into making a routine save by diving onto a low drive from Charles as Enfield carried on looking the most dangerous of the two teams. A super ball carved Horsham’s midfield open as Junior Mubiayi latched on and was invited to shoot just over, with the effort taking a slight deflection on the way out, and from the resulting corner a free stooping header was nodded just was by Bricknell who let Horsham off.

Enfield Town would learn to rue those misses however, as Horsham scored two more goals within four minutes to turn the tie firmly in favour of The Hornets. The inspirational Harris started and finished a move in which Horsham countered, the midfielder passing for Jerry O’Sullivan to collect who brought the ball out to a wide position and crossed into the box, The Towners cleared but only so far out to Harris who reacted quickest to seize on the loose ball, and he took a touch to cut in on his right as he evaded Rumens’ sliding challenge, before lashing into the net in what was a smashing goal.

Horsham’s afternoon then got even better when Lavery was hauled down on the edge of the semi-circle. The former Dorking Wanderers man stepped up to take the freekick, striking it cleanly, low down and forcing McDonald into a save, however Smith was alert to force home the rebound.

All of a sudden, Enfield Town looked toothless as they failed to muster any form of response and they were thankful to McDonald for denying Smith his hat-trick as he ran through one-on-one and looked to fire in low down, only to see his attempt blocked superbly low down.

A clever flick on inside the box nearly fell for unlikely goal source Steve Metcalf who nearly saw his run rewarded, however McDonald was quick of his line to smother the ball.

But Horsham would give their fans even more to smile about late on with a fourth and final goal following some great trickery by Zack Newton who drove into Enfield’s own half as the defence stood off him, and as he skipped past a defender, he nestled into the bottom corner of the net with a well taken finish to seal all three points.

Horsham will take a brief break from the league next Saturday as we travel to Tower Hamlets in the FA Cup, before another trip on the road to Sussex rivals Lewes at The Dripping Pan on Bank Holiday Monday. 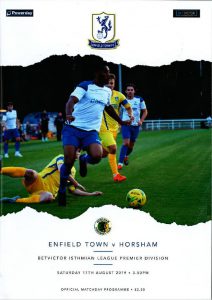 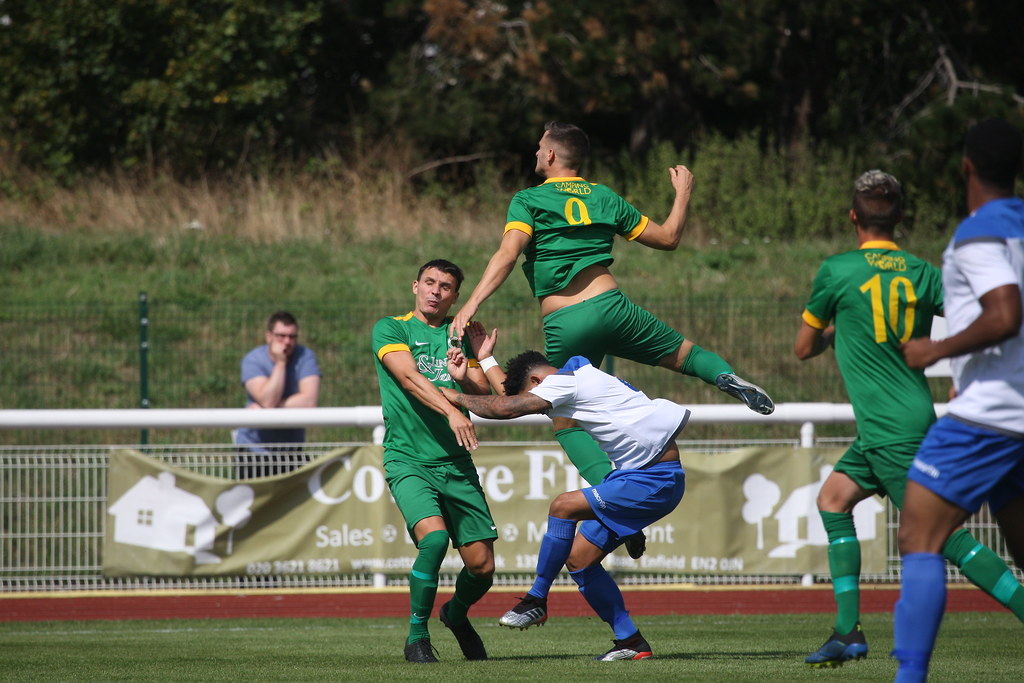