What can you say about Gary Charman that hasn’t already been said before? The veteran player has earned plenty of plaudits during his time as a player for The Hornets, and he did so once again as he rolled back the years as his sublime first half volley proved enough to earn his boyhood side all three points to ensure Horsham a top three place on Christmas Day.

His goal vindicated Dom Di Paola’s decision to deploy the versatile 38 year old up front, but while he may no longer have the pace or the stamina to last a full 90 minutes, his goal was worthy of winning any football match, while he might have had a second had it not been for the crossbar seconds before half time.

Prior to the match, Horsham’s league form had shown signs of stuttering as back-to-back defeats at home to Margate and on the road at Folkestone meant that The Hornets might have been in danger of seeing their ambitious title aspirations disappear before the New Year. This victory, while no means a vintage Horsham performance should go some way to addressing that decline before a pulsating local derby away at Worthing on Boxing Day.

Horsham supporters will certainly take encouragement in the way their team held their nerve to see off a stubborn East Thurrock United side who began the game brightly.

In fact, they took just 35 seconds to test the palms of home goalkeeper George Bentley, as Darren Foxley was not picked up on the edge of the box and looked to hammer home the advantage, only for the Hornets ‘keeper to push the ball over his crossbar.

Horsham went close at the other end on four minutes when Jack Brivio nodded Jerry O’ Sullivan’s dangerous freekick over the bar however a minute later, United let Horsham off the hook. Alex Clark quickly capitalised on a mistake from Horsham’s defence and dutifully squared low into the six-yard area towards Matthew Price, who only had to poke it home, but instead allowed the ball to roll past him.

It was a huge let off, but the visitors continued to look more industrious and contained their counterparts largely in their own half as they hustled Horsham into losing possession, with Clark snatching a shot wide on 26 minutes.

From the opposite flank, United would then whip in a dangerous cross that Frankie Merrifield poked over the bar and the pressure continued on the home side, as Danny Cossington found time and space to smack a 20-yarder wide.

Gradually though, Horsham began to grow into the contest as they applied some pressure on the Essex side. Charlie Harris and Jerry O’Sullivan quickly establishing a weakness down United’s right wing as they delivered a succession of low crosses that the guests cleared.

And it proved key to unlocking The Rocks’ defence when a reverse pass out was latched on by O’Sullivan on the right, and his cross was dispatched on the volley by Charman, who jumped up and shaped his body position accordingly to volley in.

Charman came inches close to grabbing his, and Horsham’s second moments before the break as Taurean Roberts fed Harvey Sparks, the former Bognor Regis Town man fired a cross-cum-shot at Jack Giddens who parried, but as the ball came to Charman, his instinctive shot cannoned off the crossbar.

Horsham looked for an early second half goal to secure their advantage through O’Sullivan who burst his way down the pitch with a pacy run and looked up to crack an effort at goal, but despite his best endeavours, he fired well wide.

Chances for either side quickly became limited with both team’s attacks disintegrating as soon as they often began, while neither side were helped thanks to the pettiness of the match day referee as the flow of the game was constantly interrupted.

Looking to hit East Thurrock on the counter, a move between Brivio, Charman and Harris quickly broke down as The Rocks managed to get bodies back to stop the attack, but once again the woodwork came to the rescue with little under quarter of an hour remaining for the guests. O’Sullivan’s strike took a deflection, hitting the underside of the bar and stayed out with the full-back not quite believing his luck.

The woodwork would be struck for a third time during the afternoon as Horsham attempted to kill the game off late on with United nearly paying the price for their high line. Substitute Harry Mills strode forward with the ball from out wide, and spotted the run of Rob O’Toole making his way into the box, yet his cross into the box towards him came off the boot of defender Jason Ring, who inadvertently whacked it off his own post.

With five minutes of added on time surprisingly added on, Horsham were presented with a gilt-edged chance to wrap things up right at the death. A mistake in defence allowed Chris Smith to pounce and unchallenged towards Giddens in goal, however he failed to make United pay, hitting it low but too close to the Rocks ‘keeper, who did well to make the save low down and grasp the ball.

It made no difference, though, as Horsham secured their first league points in just under a month. 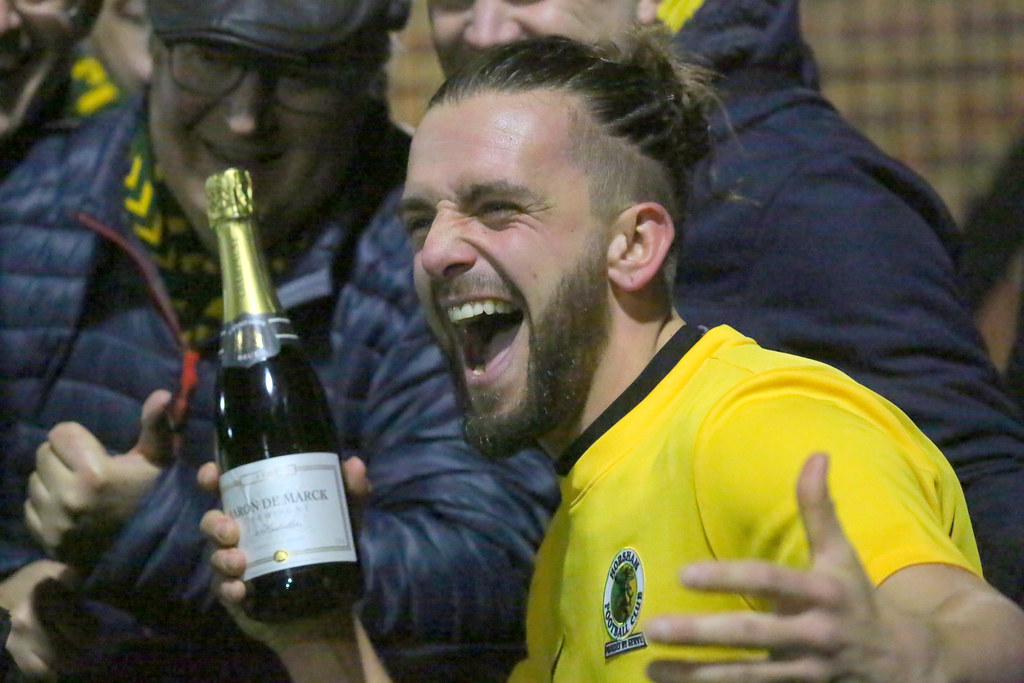