A second half penalty converted by Harry Mills was enough to separate The Hornets from second-from-bottom Corinthian-Casuals, as Horsham put their midweek disappointment against Worthing behind them in an uninspiring display of football from both sides.

As one of non-league football’s most famous clubs, Corinthian-Casuals inspired the formation of Brazilian club Corinthians Paulista, have supplied players for England internationals and were famed for the ‘Corinthian Spirit’ – setting an example to others for sportsmanship and to ensure the game was played with gentlemanly conduct.

You wouldn’t have guessed any of that happened here. For long periods, the 557 supporters would have to endure a scrappy game often punctuated by cheap fouls – largely committed from the visitors – and it proved a foul too many for Kevant Serbony who gave away the decisive penalty for a foul on Rob O’Toole, while Turkish midfielder Coskun Ekim was shown a straight red for dissent late on as Horsham held on.

A classic this wasn’t, indeed the first half contained just three chances worthy of writing about with the first of which occurring on 16 minutes. Horsham pumped a long ball deep into the box that was sent back across the edge of the area where it was met by a looping header by Joe Shelley. With the ball dropping and heading into the net, Casuals goalkeeper Danny Bracken pulled off a superb acrobatic save to divert the ball away to safety.

Yet the game failed to spark into life, with another quarter of an hour passing by without note, although The Hornets fashioned a good chance through a clever bit of football when they found some space in the Casuals’ own half, a raking pass found O’Toole in a wide position, and the big target-man drove a low ball across the face of goal however there was no one inside the box to convert as the chance went begging.

At the other end a panicked half-clearance by George Bentley almost gave the visitors the chance to score before half time, the shot-stopper failing to get a good enough contact on a punch out that came straight to Ben Checklit, but the winger’s first time shot on the half-volley was poor and went well wide.

Horsham went close just two minutes into the second half as an attack on the right flank resulted in O’Toole – now playing in a more central role – prodding an effort wide as Dom Di Paola’s side appeared to wake up. Yet at the back, Horsham were nearly caught napping and needed a crucial stop from Bentley to deny Mathias Bakare who was picked out in acres of space, his daisy-cutter magnificently blocked by the shin of the goalkeeper who reacted brilliantly to get across his goal to deny him.

Shortly after, Horsham looked to counter with an attack as O’Toole held up the ball and sprayed a pass out to Greg Cundle, motoring along the wing, Charlie Harris demanded the ball off him and the midfielder collected and smacked a rasping shot that took a deflection out for a corner. From the resulting set piece, Bracken flapped at the ball but Horsham were unable to take advantage from the scramble as Casuals eventually cleared.

With 15 minutes remaining, the game’s pivotal moment arrived. A silly challenge from Serbony on O’Toole felled the Hornet’s hitman, and with referee Alastair Higgs well placed, he duly pointed to the spot and while Harry Mills might not be a regular penalty taker for Horsham, he showed he knows how to take them, dispatching it powerfully into the right hand side of the net.

Casuals made a triple substitution on 80 minutes as they sought to salvage a point from the contest, but still, neither team looked like scoring from open play with Kevant Serbony squirming a shot horribly wide.

With the clock ticking down, any hopes Casuals might have had were in effect ruled out with four minutes left to go. Again, Casuals committed another foul and this time Ekim – who was lucky not to have been booked for his previous indiscretions – used abusive language towards Mr. Higgs who showed him a straight red card.

O’Toole flashed a header over from the resulting free-kick, as Horsham saw out the game to ensure they stay in the hunt for one of those all elusive play-off places come the end of the campaign. 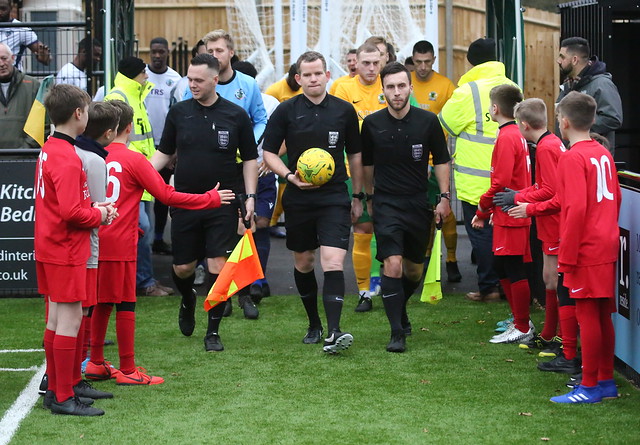