Horsham secured another three points in their quest for a play off place as the business end of the season intensifies at the expense of struggling Cheshunt.

Led by a virtuoso performance from Lee Harding, who scored one and made one, The Hornets were given a helping hand to victory when Amadou Kasaratte picked up two yellow cards in the first half – getting himself dismissed on 37 minutes after Harding had opened the scoring with a silky finish, and against ten men, Horsham doubled their lead early in the second period thanks to Jack Brivio’s tap in.

Positive results in recent weeks have gone some way to ensuring Horsham get their season back on track as quickly as possible after slipping out of the play-off places since January and despite a week off following our late postponement at nearby Leatherhead last weekend, Dom Di Paola’s side showed no signs of rustiness as they put in an impressive performance and managed the game well.

Whether or not Di Paola will owe his side’s success to 30-year-old mascot Alex Stocker is another matter. The sight of a slightly embarrassed grown man leading out the two teams dressed in full kit while he enjoyed a kickabout with Howie The Hornet certainly set the tone for an afternoon in which the season ticket holder wouldn’t go home disappointed as Horsham quickly established themselves as the dominant force with not even a minute played. A nudge wide to Harding allowed the winger to find space and send over a dangerous cross that goalkeeper Harry Girling scarcely could reach, but there was nobody available at the back post to convert.

On five minutes, Chris Smith – sporting a new bleached blonde hairstyle – flashed a square ball across the face of goal but it rolled behind Greg Cundle who couldn’t react.

With Smith already running himself ragged for the cause, the striker latched onto a fortunate pass through to him and surged ahead, playing the ball diagonally ahead of him for Brivio to collect, but with work to do, and from the angle, the Hornets captain got it wrong and slashed high and wide with the outside of his boot.

Diminutive former Horsham winger Zack Newton nearly scored against his old club with Cheshunt’s first chance of note 17 minutes in when he managed to evade the offside trap and hold off his marker, turning to fire across the face of goal, but ultimately wide.

Hornets defender Steve Metcalf – marking his 150th Horsham appearance – then pulled off a fantastic interception to prevent Taylor Miles getting in behind the defence, when he hooked away and it proved crucial as Horsham took the lead minutes later.

It came from the in-form Harding, who made it three goals in four league appearances, when he collected on the right side and darted towards goal, he evaded the sliding challenge of Miles who was shown a clean pair of heels and arrowed a low finish into the bottom left hand corner to cap a superb individual goal oozing with flair.

Cheshunt’s afternoon was then about to get much harder when Amadou Kassaratte picked up his second yellow of the match. Having been cautioned for deliberate handball earlier, the full-back was caught out by Cundle who showed fantastic desire to sprint down the pitch and keep a lost cause in play and as Kassaratte lost out, his silly decision to haul the Horsham forward down left referee Mr. Peter Cruise no option but to send him off.

Horsham should have been 2-0 up within two minutes of the restart when Harvey Sparks powered down the left flank and sent over a wonderful cross into the 12 yard box, but it was met by the head of Harding who nodded wide.

Despite their numerical disadvantage, The Ambers went close to drawing level when Tanasheh Abrahams’ whipped cross caused all kinds of problems for Joe Shelley and Dylan Merchant, with Ryan Moss sending a diving header wide at the far post as Horsham’s rear guard became stretched.

Had Moss scored, it could have been different, but Horsham quickly doubled their lead and essentially killed off the game with a well worked team goal on 52 minutes. Of course, it was the ever-influential Harding who created it, running onto a lovely ball out from midfield and cutting inside at the by-line before looking up and cushioning a pass into the box for Brivio to tap in from two yards out.

Horsham had more chances to get themselves out of sight. With Brivio in the centre of the pitch dictating play, his lovely pass sent Cundle through, but his ball into the box was behind Harding as the chance went begging.

It would prove Cundle’s last contribution as he made way to allow Alex Clark to make his Horsham debut, and the East Thurrock signing was imeddiately in the thick of it when his energetic run saw him slip past Taylor McKenzie and cross low into the box, only for Smith to lose out as Cheshunt intercepted and cleared.

With just over quarter of an hour to go, a sustained bit of pressure from the visitors hemmed Horsham back in their own half as they looked for a route back into the match, but as Horsham countered, Harding once again took charge, running at the Ambers’ defence and flicking to Smith, who in turn found Metcalf, the full back went for glory but failed to keep his shot on target.

Brivio then headed into the side netting when he rose to head Joe Shelley’s cross deep at the far post, but Horsham were in no means safe just yet as ‘keeper George Bentley batted away a fierce shot from Reece Beccles-Richards moments after Jamie Reynold’s had fired well wide.

With Horsham opting to preserve what they had and hoping to pick Cheshunt off should chance present itself, Charlie Harris nearly scored from the spectacular. Intercepting in the centre circle, he spotted Girling off his line and went for an audacious lob from inside his own half, only narrowly clearing the top of the crossbar.

The game in injury time, Horsham had a brilliant chance to grab a third when Sparks was set through and centred for Clark yet the Hornets new-boy was unable to claim a debut goal, putting it wide when he should have at least hit the target.

Horsham will now take on Margate as we turn to cup action on Tuesday night, before league points are at stake once again next weekend when we make the trip to Carshalton Athletic. 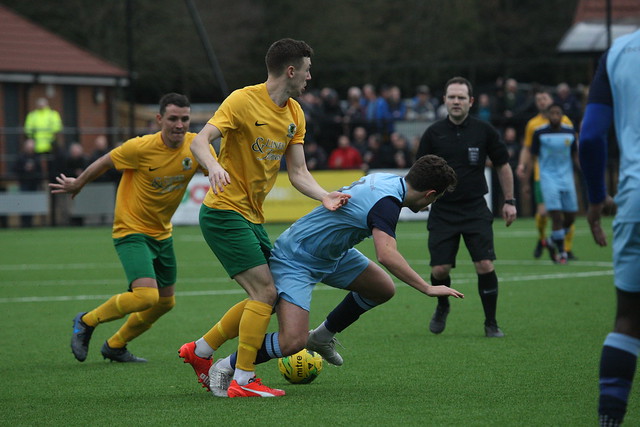