Not for the first time this season, Dom Di Paola was left bemoaning his side’s inability to convert chances as Bognor Regis Town took the West Sussex ‘bragging rights’ with a goal in each half that keeps alive their hopes of securing a play-off spot.

Dartford, Folkestone, Cray, Met Police, and now Bognor could all consider themselves fortunate to have avoided defeat at the hands of the Hornets, whose profligate finishing could prove to be the difference between a top five place and missing out on a shot at a second successive promotion. Time and again they opened up the Rocks’ defence in the opening half hour yet failed to seriously trouble goalkeeper Amadou Tangara and were hit by a sucker-punch, albeit a terrifically struck effort from Tommy Leigh, midway through the first half.

The final hour, though, belonged to the visitors as they controlled the majority of the match thereafter and never really looked in danger of dropping points from the moment Harvey Whyte bundled in their second, nine minutes after the break.

Bognor’s joint-manager, former Bradford City and Bolton Wanderers midfielder Robbie Blake, had labelled this match as a ‘must win’ for his side, who sat twelve points behind fifth-placed Carshalton Athletic at the start of play having played three games less, but the importance of this local ‘derby’ wasn’t lost on his Horsham counterparts who knew they could ill-afford any slip-ups from this, one of two games in hand on the Robins whom they themselves trailed by five points.

In such high-pressured circumstances it’s not often that a game lives up to the pre-match hype but, on this occasion, a good-sized crowd were treated to a terrific contest in which both sides produced some excellent football, backed by two sets of vocal supporters.

The match was just four minutes old when Horsham spurned their first chance of taking the lead. Bognor made a hash of trying to clear the ball and when Charlie Harris took possession midway inside the visitors’ half and sent it out wide to Steve Metcalf, the full-back’s cross was perfectly-placed for Greg Cundle whose shot was kept out by the right boot of Tangara. Three minutes later, and following a decent bit of possession by the team in amber and green, Alex Clark collected a pass and cut inside two defenders only to send his shot high over the crossbar.

The Rocks, who had begun the game on the front foot only to become increasingly overrun by their hosts, looked dangerous on the counter-attack when Dan Smith was played into the box where it needed a decent block by Joe Shelley to prevent the forward from getting a shot on target. As play returned to the other end, Clark did well to pinch Metcalf’s slightly underhit pass away from his marker and send the ball inside to Harris, but his attempt went the same way as Clark’s before him, the ball sailing harmlessly high and wide of Tangara’s goal.

A breathless opening ten minutes then saw Elliott Buchanan play a neat pass out to the left where the overlapping Cundle made ground before returning the ball to his on-loan team-mate who ballooned his strike high into the netting behind the far goal. Tangara did have a save to make, a minute later, and Cundle was again the man he denied albeit it was rather a more routine one than that earlier effort after the Bognor defence had momentarily switched off on the edge of their own penalty area. Another chance went begging when Harris received the ball in acres of space and picked out Cundle, who blasted his shot away into the darkness of the night sky.

A long range strike by Buchanan was surely more in hope than expectation after Lea Dawson had done well to win the ball in midfield although, in fairness to the Dorking man, he had little else on when faced with four visiting defenders and no viable passing option.

Despite their constant pressure, it was twenty minutes before Horsham forced their first corner from which they threatened once again when Shelley’s downward header was blocked inside the six yard box before eventually being cleared. Less than sixty seconds later they had their second flag kick which, this time, somehow went right across the face of goal without anyone getting a telling touch.

It was, then, completely against the run of play that Bognor took the lead when Tommy Leigh was given too much space in the midfield to line up a shot from fully 25 yards that zipped along the ground and nestled inside George Bentley’s bottom right hand corner. It was a wonderful strike that sparked scenes of delirium among the visiting masses and had Horsham fans looking to the heavens, bemoaning their ill-fortune.

The match threatened to turn ugly in the minutes immediately following the goal, with Joe Cook’s strong challenge on Cundle earning the Bognor man a caution and prompting players from both sides to square up to each other as referee Joe Stokes attempted to take control. Alex Kelly then followed Cook into the book for an off-the-ball trip on Smith and then Clark suffered a similar fate for retaliating to a sly kick by Keaton Wood that went unnoticed by the match officials.

Against this, mercifully short-lived, undercurrent of ill-feeling, Horsham looked to get back on terms as quickly as possible and Clark had a chance to do so when found by Metcalf’s arcing pass down the right. But, having cleverly lost his marker, the youngster’s strike was never likely to beat Tangara at his near post, the ‘keeper getting his angles right and dropping down to smother the ball comfortably.

The cushion of a goal lead served to give the visitors greater confidence and they bossed the remaining quarter of an hour of the first half. Jake Flannigan was unfortunate to see his goalbound shot cannon off a team-mate and behind for a goal-kick and only Bentley’s outstretched boot prevented Ashton Leigh from doubling their advantage following good approach play by Whyte and James Crane. Bentley was again alert to push away a dangerous low cross by Tommy Leigh, with a Bradley Lethbridge effort deflected behind for a corner and another fine delivery, this time from Lethbridge, allowed to run across the six yard line and out for a throw-in.

The Hornets’ fans were becoming anxious for the half-time whistle as Bognor continued to press, and Bentley had to make an uncomfortable save from a Flannigan thirty-yarder that the goalkeeper had to dive forwards to take as it threatened to bounce just in front of him. The half ended with the visitors well on top, with Bentley acrobatically palming a thumping Crane free-kick over the crossbar just before the whistle.

Horsham were almost caught cold, within four minutes of the restart, when Whyte was presented with a shooting chance from around the penalty spot but could only fire way over the top. Clark fared similarly at the other end when former Rock Harvey Sparks, who had been booked for deliberate handball just moments before, sent Cundle scampering away down the left from where he delivered a low cross that Clark, under pressure from Kristian Campbell, put his effort onto the clubhouse roof.

Campbell, one of the visitors’ stand-out performers, was fortunate to get away with a miskick when he completely scuffed an attempt to clear Kelly’s cross but, with no-one in an amber shirt close enough to profit from his error, Tangara was able to mop up the danger amid highly optimistic cries of ‘backpass’ from the home fans stationed behind the goal.

As if to prove this was going to be Bognor’s night, their next attack saw a free-kick rather fortuitously awarded in their favour when the ball ricocheted off a Bognor forward and against Shelley’s hand in a position dead centre of Bentley’s goal, on the edge of the ‘D’. Ashton Leigh struck the set-piece past the wall and beyond Bentley’s despairing dive, the ball coming down off the crossbar and tucked away from close range by Whyte to make it 2-0 to the visitors.

Things might have been different had Cundle not put a Harris pass over the bar, two minutes later, with what would prove to be the home side’s best chance for the remainder of the game. Di Paola elected to sacrifice the pace and trickery of Clark in order to send on Rob O’Toole, and subsequent substitutions saw Harry Mills replace Metcalf and Chris Smith come on for Cundle, but it was Bognor who went closest to changing the scoreline when Tommy Leigh’s flick thudded into the body of Bentley, who had positioned himself well to save the midfielder’s shot.

Mr Stokes was spared the complaints of the Bognor players when Sparks’ whipped in cross just failed to find the outstretched boot of Smith and O’Toole, after the referee had allowed a foul by Harris to go unpunished with the Rocks in possession of the ball, and then Tangara raced quickly from his line to grab the ball ahead of Smith who had been played in behind the Bognor backline.

The Hornets were doing their best to get themselves back in the contest but could muster little more than half chances by now, with a Sparks shot deflected behind and O’Toole’s deep cross pushed onto his own crossbar by Tangara. And as the game became more open, due to the home side’s necessity to push men forward, so Bognor had chances to win more comfortably. Bentley fumbled a shot by Crane, with substitute Joshua Flint taken by surprise and unable to turn the rebound in from close range, and a late three-on-one counter-attack was ruined by a pass that sent Tommy Leigh too wide with a third goal surely in the offing.

O’Toole powered a stoppage time Harris corner over the crossbar to bring the match to a close and perhaps sum up the Hornets’ evening. What had begun so impressively, and so promisingly, had seen them end with nothing to show for their endeavours and left the travelling fans singing all the way back down the A24. 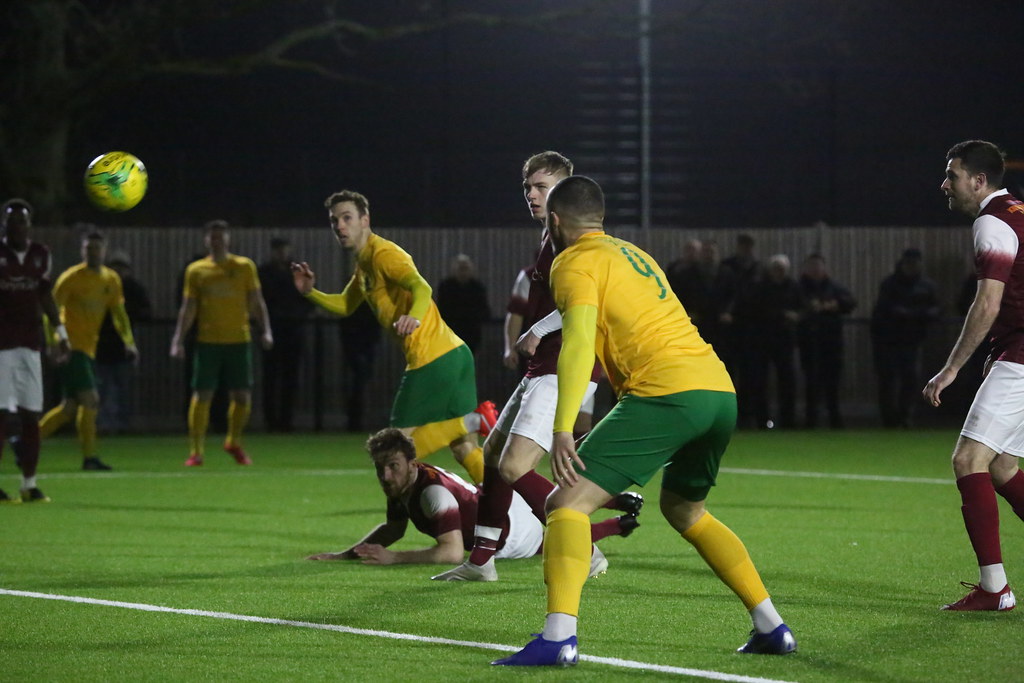