Horsham relinquished their grip on top spot when they went down to a surprising 2-0 loss at lowly Bishop’s Stortford, for whom second half goals by debutant Jordan Chiedozie and substitute William Mycroft-Edwards secured the Blues their first victory since the end of August.

The Hornets made just the one change to the eleven that started Tuesday’s 2-2 draw with Carshalton Athletic, with Jack Brivio replacing George Hayward, while Blues boss Jamie Cureton promoted Alfie Mason, Mark Haines and Shomari Barnwell to the starting XI having been named among the substitutes for their most recent outing – a 1-4 reverse at home to Potters Bar.

The early stages of the match saw both sides go close, with Shomari Barnwell blazing an effort over the crossbar and Chris Smith responding with an attempted lob that was comfortably cut out by home goalkeeper Fred Burbidge. The Hornets were grateful to September’s Golden Gloves winner, George Bentley, from keeping them on terms when he came out quickly to smother an effort by Barnwell, who had been put through by Chiedozie, and then Rob O’Toole had a couple of chances to break the deadlock. The first, from a Charlie Harris free-kick, resulted in an underhit shot that went straight at Burbidge, and the second, an acrobatic volley from a measured Harris chip, flew high over the bar.

There were a couple of let-offs for the visitors, when a Barnwell header dropped just wide of the goal and Mark Haines put another header wide from a Ben Sampayo cross, but Harris went closer than anyone to finding the net in the closing moments of the first half when he put a shot against the post and could then only head the rebound straight into Burbidge’s hands.

The second half took a while to catch fire, with an ambitious long range strike by Harris too high to trouble the home ‘keeper, while Bentley was called into action to palm away a powerfully-struck attempt by Barnwell. Harris tested Burbidge with an awkwardly-bouncing free-kick that was pushed away, just after the hour, and the Hornets suffered more misfortune when a low cross by Harvey Sparks was turned against the far post by the stretching Kieron Pamment.

Having survived their second close shave, perhaps it was inevitable that the Blues would make the most of their luck by edging ahead on 73 minutes when Ryan Charles sent in a corner that was met by the head of Chiedozie to divert the ball past Bentley and into the net. Charles then had the chance to double the lead but put the ball just wide from a narrow angle, with the sliding Barnwell unable to make a telling contact. However, the hosts made no mistake, and wrapped up the three points, when Charles picked out Mycroft-Edwards who timed his run to perfection to beat Bentley at the far post.

The Hornets fashioned two chances in stoppage time, with Zack Newton’s angled drive comfortably saved by Burbidge and Pamment forcing the former Boreham Wood stopper into a sprawling save.

The defeat, coupled with Folkestone Invicta’s 1-0 success at Corinthian-Casuals and Matt Johnson’s last-gasp winner for Hornchurch over Bowers & Pitsea, sees the Hornets drop to third place ahead of next Saturday’s visit of Merstham.

Match photos below by John Lines 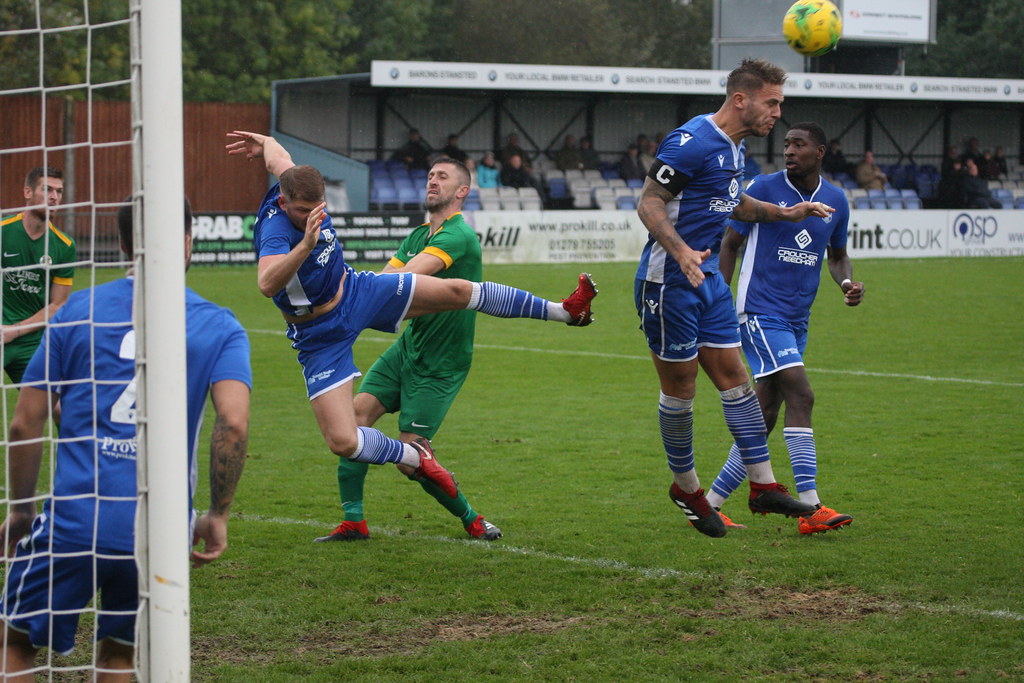