There was no shortage of entertainment for another big Camping World Community Stadium crowd today when, on a dramatic afternoon, the Hornets fought back from two goals down to salvage a point, thanks to a stoppage time penalty by Rob O’Toole.

Trailing 3-1 with less than ten minutes to play, courtesy of a hat-trick by Bishop’s Stortford’s evergreen player-manager Jamie Cureton, the home side looked set to rue a host of earlier missed opportunities until substitute Chris Smith gave them hope with a sensational 25 yard strike. Even then, Dom Di Paola’s side appeared destined to finish empty-handed until Alex Kelly was fouled in the box and O’Toole stepped up to squeeze the ball past ‘keeper Fred Burbidge from 12 yards to spark ecstatic scenes among the home faithful.

With Charlie Harris away in Australia until the middle of February, Jack Brivio was handed his first start since the New Year’s Day victory over Lewes and seemed to revel in the responsibility with a Man of the Match display that saw him have a hand in two of the Hornets’ goals. Unusually, though, it was Horsham’s hitherto miserly defence that suffered an off day with, arguably, each of the Hertfordshire side’s goals comfortably avoidable. Indecision by the returning Joe Shelley and Gary Charman, whose recent 600th appearance was marked before kick-off with the presentation of a silver salver, handed Cureton the sort of chance he has taken regularly throughout his 27 year career, with the former Norwich striker adding two impeccable penalties after the centre-backs had each committed rash challenges.

Shelley was back in the side at the expense of Will Miles, who failed a pre-match fitness test, and, with Brivio, was one of three changes from the side beaten at Merstham last weekend with Harry Mills and Taurean Roberts named among the substitutes alongside U23 striker Noble Rumsey, while Lee Harding was restored to the starting line-up.

Beaten 2-0 at Bishop’s Stortford back in October, Horsham heeded their manager’s pre-match words in going at their opponents from the very first minute and an inviting Steve Metcalf cross, after just 90 seconds, just needed a team-mate’s touch to give them the perfect start. But there was little else of note inside the opening quarter of an hour, save for a ball change and a caution for Charman for going through the back of The Blues’ new signing Alex Read. The former Tonbridge Angels man soon showed that he received no lasting damage though when, receiving a superb diagonal pass from the full-back, he raced into the penalty area and thrashed in a powerful cross-shot that was palmed out by George Bentley. From the resulting clearance, Greg Cundle went through at the other end and shot just wide of the far post.

Horsham were enjoying plenty of possession, albeit helped by their opponents’ propensity to overhit the pass, and when Brivio wrestled the ball back from Alex Warman in the middle of the pitch, he took a couple of strides forward before sending a rising shot over the crossbar. Another chance quickly followed when Harding’s terrific pass picked out Metcalf and when his first-time cross was missed by Kelly, Cundle elected to hit the ball on the volley but couldn’t keep his shot down.

It wasn’t long before the goal came, though, and it owed everything to the instinctive reactions of the predatory O’Toole. Lea Dawson won the ball midway inside the Stortford half and moved it on to Brivio, whose fierce shot was spilled by Burbidge and O’Toole raced in to get to the loose ball first to squeeze it inside the near post.

On 37 minutes a poor clearance by Mark Haines gave Harding a sight of goal, as the ball dropped to him around 30 yards out, but a slight hesitation to move the ball on to his left boot allowed a defender to close him down and his scuffed shot meant the opportunity was lost. An even better chance went begging in the Hornets’ next attack in which Harding was once more to the fore, this time taking a good touch and turn to Harvey Sparks’ pass, and when his shot was blocked the ball looped into the air but O’Toole failed to get a clean strike and the danger was quickly averted.

The visitors’ defence was earning its corn with another potentially goal-saving block after Cundle had taken Harding’s pass superbly in his stride and skipped past two markers only to be denied by Mark Haines’ brave challenge. Inevitably, perhaps, having failed to press home their advantage the home team were pegged back on the stroke of half-time when Charman and Shelley failed to deal with Ryan Henshaw’s hopeful long ball and Cureton nipped in to lob the ball over the exposed Bentley and into the back of the net to register his 50th goal in just 91 appearances for The Blues.

With no changes to either line-up at the break, it was Horsham who went close to breaking the second half deadlock when Dawson headed Kelly’s deep corner back into the mix where Shelley’s flick was so close to finding the mark that some in the crowd were prematurely celebrating a goal. A minute later, a determined run by Brivio and off-load by Cundle saw Sparks put a left-foot shot into the side-netting.

It was a promising response to their late first half setback but they were rocked on their heels when Shomari Barnwell, having appeared to have lost control of the ball, was brought down by Charman’s scything challenge inside the box and Cureton stepped up to send the spot-kick high into the top right-hand corner. Undeterred, Horsham went back on the attack and came close to restoring parity within five minutes when Sparks showed admirable footwork to bring the ball over the halfway line and into Cundle, whose dangerous low cross had to be touched behind at the far post by a defender.

Yet the Hornets would have fallen further behind on the hour when Metcalf headed Sam Robbins’ cross straight to Cureton whose instinctive, curling, effort looked a certain goal until Charman headed it off the line. The Hornets’ efforts were becoming a little more rushed now and Dawson put one wide from 30 yards with players in support on either side. Their task became even harder on 66 minutes when the visitors were awarded a second spot-kick. An untimely slip by Charman, just inside the box, opened up the space for Barnwell to shoot but having appeared to have got the better of Shelley, The Blues’ target man blasted the ball wastefully wide. His profligacy was, though, as a result of a slight clip to the heels by the Horsham centre-half and Cureton took full advantage of the gift by blasting his penalty into the exact same spot as before to open up a two goal lead.

Job apparently done, Cureton made way for Lawrence Mullins-Hammond shortly after and, a couple of minutes later, Read was replaced by Matthew Campbell-Mhlope whose first involvement saw him booked for kicking the ball away after he had been pulled up for offside. But it was a Horsham substitute that would make the biggest impact on the game when, just seven minutes after replacing Dawson, Smith scored a stunning goal. Played onside by a clearance that sliced off the boot of Stortford’s Jordan Westcott, the striker needed just a quick glance up before putting the ball into the top corner from all of 25 yards.

With just eight minutes left to play, the match was set up for a grandstand finish as Horsham lay siege to their opponents’ goal and a fantastic move, in which Brivio’s pass was dummied by Kelly for Sparks to run on and strike a goalbound shot, ended in an equally superb stop by Burbidge. From the corner, Kelly put the ball right on Brivio’s head but once more the goalkeeper was equal to it, sticking up an arm to turn the ball over the crossbar.

There were huge appeals for a penalty when Sparks’ low cross appeared to hit the hand of the prone Bradley McClenaghan but ‘nothing doing’ said referee Conall Bartlett, to the dismay of the now fervent home crowd. Another loud roar went up, more in desperation than in hope this time, when Brivio’s effort from the edge of the box smacked against the body of a visiting player but there was little time to draw breath as when the ball was played back into the box by Harding, Brivio dragged his shot agonisingly beyond the far upright.

Stortford used up valuable seconds by introducing Billy Mycroft-Edwards to the fray with a minute of normal time remaining but the drama took another turn when, in the third minute of stoppage time, another snappy exchange between Brivio and Kelly was ended when Henshaw’s lunge sent Kelly to the deck and, for the third time in the match, Mr Bartlett pointed to the spot. With memories of that last-kick penalty miss against Folkestone still in supporters’ minds, and perhaps still in Smith’s, O’Toole was entrusted with the duties and just about succeeded, sending the ball into the bottom corner despite a valiant effort by Burbidge.

As Horsham players raced in to retrieve the ball for one possible last assault, Burbidge seemed to punch Sparks to the floor that, inexplicably, earned the goalkeeper just a yellow card. It was the last of so many talking points from yet another entertaining and eventful afternoon at the Hop Oast. 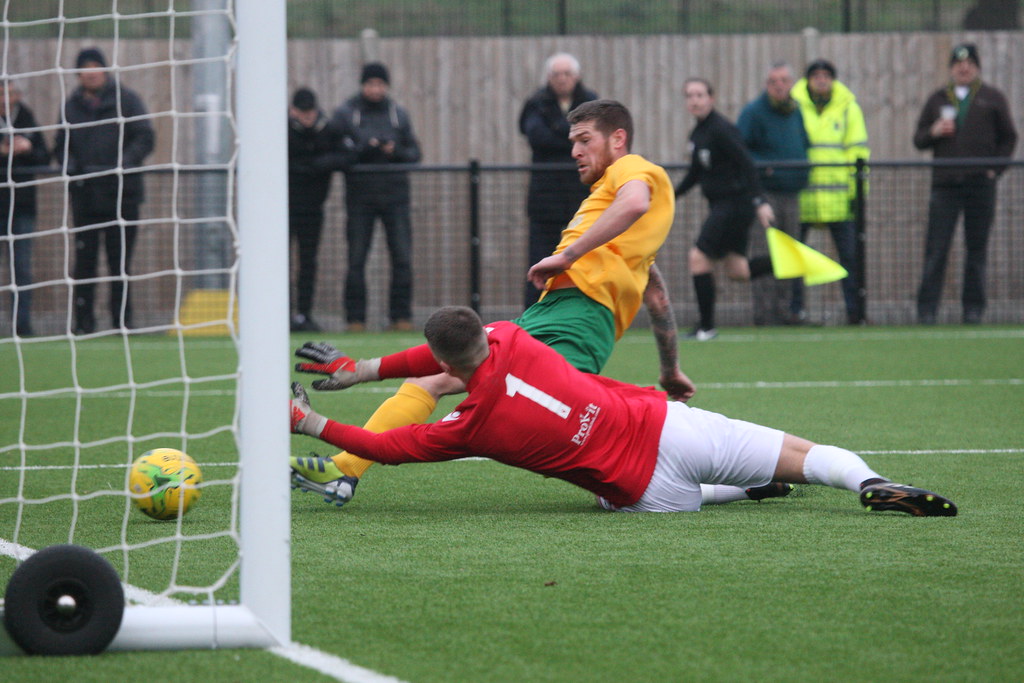