Horsham battled back from 2-0 down at half time to draw 2-2 in Dorset, with Charlie Harris scoring a sensational strike from the halfway line at the death.

The Hornets have been impressive in pre-season, with four wins out of five ahead of the visit to take on The Magpies, yet in the Dorset sunshine, Dom Di Paola’s side were put through their paces against a hardworking, if slightly physical Wimborne side.

Despite Horsham having the first attempt at goal on five minutes, with Jack Brivio firing wide, The Hornets found themselves behind within seconds as Wimborne raced down the other end of the pitch and broke the deadlock. Luke Holmes’ pass found Kieran Roberts who rounded the Horsham trialist in goal and scored.

Horsham looked for a response, and they went close when Dylan Merchant headed a looping effort that was then forced over by Mulachi Hudson from inside the area.

The home side however were enjoying the better of the first half, with their industrious play keeping Horsham on the back foot, and limiting the visitors to virtually no chances on goal, and they grabbed a second goal minutes before the break to give their guests a mountain to climb. A through ball snaked its way beyond the static Horsham defence, and with the ball ending up in the path of striker Tony Lee, the former Gosport Town man coolly finished.

Horsham were offered the chance to pull one back eleven minutes after the restart when dead ball specialist Charlie Harris stood over a freekick some twenty yards from goal, however he failed to break home goalkeeper Callum Plain into any kind of sweat when he struck only the wall.

At the other end, the Horsham trailist in goal made his case for selection when he pulled off a decent save to divert Luke Burbridge’s low angled drive towards the far corner, while he followed up minutes later with another impressive stop, diving to his left hand side to palm away a curling freekick taken by Bill Maybury.

However, Horsham put their disjointedness behind them and began to fight back. They had a great chance to pull one back midway through the half when Hudson rolled out towards Harry Mills, yet the full back opened up his foot looking to place low down at Cameron Plain’s nearside, who stopped with his feet.

Rob O’Toole then saw an effort cleared off the line by Frankie Clarke, but from the resulting corner, Horsham scored as Will Miles bundled the ball home.

And just when Horsham fans who had made a four-hour trek on the coach thought that the equaliser wasn’t going to come, Charlie Harris scored in spectacular fashion on ninety minutes. Plain’s goal kick out came straight to the Hornets midfielder, who capitalised on the goalkeeper being stranded off his line, and he returned fire with a sweetly struck effort that hit the centre of the net. 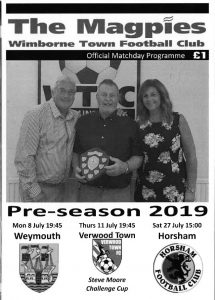