As homecomings go, this was about as good as it gets; blue skies, warming temperatures, a four-figure crowd, spectacular goals and a performance that had the home fans purring. That this latest victory, the Hornets’ fourth on the spin this summer, came against their close neighbours Crawley Town added gloss to an occasion that always promised to be a day of celebration for everyone associated with Horsham Football Club.

More than a decade has passed since the Hornets had a home they could call their own and as spectators took their places around the new Camping World Community Stadium before the start of its official opening, the smiles on the long-suffering faces told the story. Worthing, Horsham YMCA and Lancing all played the part of dutiful landlord during that time and did their best to make our period of homelessness as comfortable as possible but, as Dorothy once said, there’s no place like home!

Swelled by a decent contingent from along the A264, many of whom would have seen the Reds’ 1-0 loss at home to Brighton & Hove Albion the night before, the ground looked resplendent, ‘like a proper football ground’ remarked one. Queues at the bar, the toilets and food stall, the club shop doing a killing, programmes selling fast. We even had flags and singing – at a pre-season friendly!

To the respective managers, though, the pomp and significance of the occasion was secondary to the primary aim of preparing their sides for the start of the 2019/2020 season and both squads included a number of unnamed trialists. One such ‘unknown’ donned the Horsham goalkeeping gloves in the absence of recognised incumbent, Josh James, who was delayed due to a family matter while the remainder of the starting XI included Chris Smith and Harvey Sparks, both named among the substitutes for Tuesday’s 2-0 win against Haywards Heath. For their part, Crawley fielded two hopefuls in their back four and began with only goalkeeper Michael Luyambula and Reece Grego-Cox from the eleven that started against the Albion.

After a minute’s applause in memory of Horsham’s former President Frank King – how he would have loved this occasion – Crawley kicked things off and the Sky Bet Division Two side enjoyed most of the early possession. But it was the Hornets who had the game’s first chance when Sparks’ rising fourth minute drive was pushed over the bar by Luyambula. From the corner, Dylan Merchant went down under a challenge and Alex Kelly lashed the loose ball wide. It needed a timely interception by the ageless Joe Shelley to prevent Tarryn Allarakhia from getting a shot away, after his strong run had taken him into the Hornets’ penalty area, but then a terrific crossfield pass by Charlie Harris picked out Zack Newton who, after cutting inside, saw his shot blocked.

Horsham’s goalkeeper had been untroubled for the opening quarter of an hour but needed to be helped out when Grego-Cox’s cross eluded him and Shelley headed the ball behind. From the resulting corner, Ollie Palmer’s close range attempt was blocked, sending the ball onto the roof of the net.

The match was developing into an open, enjoyable, contest and Newton was next to have the goal in his sights when put clear by a quickly taken free-kick, only to delay his shot and was crowded out. Reds’ Filipe Morais thumped a shot into the top of the Octotech Stand and really ought to have scored four minutes later when a home attack broke down inside the visitors’ half. Allarakhia led the counter-attack and provided a perfect cross to the unmarked Morais who, 12 yards out, volleyed over the bar. Almost immediately Morais was put clear again, this time even closer in, but his shot cannoned away off the goalkeeper’s legs.

Crawley were punished for their profligacy, five minutes later, when Harry Mills skilfully pushed the ball through the legs of an opponent before clipping the ball forward for Smith to race on and shoot confidently past Luyambula. The lead was to last just a matter of minutes, though, when Josh Payne found Grego-Cox who advanced in to space and sent a scorching strike into the roof of the net out of reach of the diving ‘keeper. Grego-Cox was almost through again, moments later, when he looked to take advantage of a fortunate ricochet to race on into the area only to have the ball whipped off his toes by the Horsham custodian.

As the half drew to a close, some fine build-up play by the Hornets ended with a long range shot by Kelly that cleared Luyambula’s goal and took one bounce on the clubhouse roof before disappearing from sight.

James took his place in the home goal at half-time and was immediately tested, getting down superbly to deny Grego-Cox a certain goal. A dangerous Josh Doherty cross was touched behind by Sparks, with half-time sub Brian Galach waiting to pounce , and the pressure continued when some impressive movement, tight to the touchline in front of the main stand, saw Grego-Cox frustrated again, this time by James’ outstretched boot.

It was, then, against the run of play that the hosts retook the lead when a foul by the Reds’ trialist centre-half on Newton resulted in a penalty that was despatched with aplomb by Kieran Lavery. This all-action start to the half almost found Crawley level within minutes again, just as they had done in the first half, but Palmer slipped as he tried to connect with a team-mate’s low cross and the ball sliced harmlessly out for a goal-kick.

The Reds thought they had restored parity, just after the hour, when Palmer looked to have taken the wrong option by passing out wide rather than inside to the unmarked Grego-Cox. But, as the ball was played back into his path, Palmer got in a firm strike that was only half-saved by James and Harris had to race back to hook the ball off the goal-line with the hard-working Morais lashing the loose ball across the face of goal and behind.

A Crawley corner saw Galach turn and hit a volley straight at James from the edge of the box but then a neat ‘give and go’ between Mills and Hudson at the other end of the pitch saw the full-back have two chances to shoot, the second time firing wildly into the netting behind Luyambula’s goal. A minute later, though, and the ball was in the Crawley net for a third time when Malachi Hudson picked out Lavery on the left edge of the area and the striker cut on to his right boot before curling the ball delightfully into the far corner.

Substitutions followed for both sides before Hudson spurned a good chance to make it 4-1, under-hitting his shot following a clever dummy and raking pass by Kelly, but it was Crawley who looked the most threatening in the final ten minutes. First, Grego-Cox slipped the ball inside the full-back for Doherty to hit a first-time effort that James fielded at full stretch, and then a low shot from the edge of the area produced a decent, if fairly routine, stop from the ex-Burgess Hill man.

Ever-hopeful of catching the eye, one Crawley trialist hit an audacious attempt from 35 yards that sailed harmlessly over James’ goal with five minutes remaining but then an Exocet of a free-kick by Dean Lovegrove flashed menacingly past Luyambula’s left-hand post to oohs and aahs from the appreciative crowd. The final chance fell to another Reds trialist who, having found himself the recipient of a well-timed pass by Grego-Cox, could only roll the ball wide of James’ left-hand post. 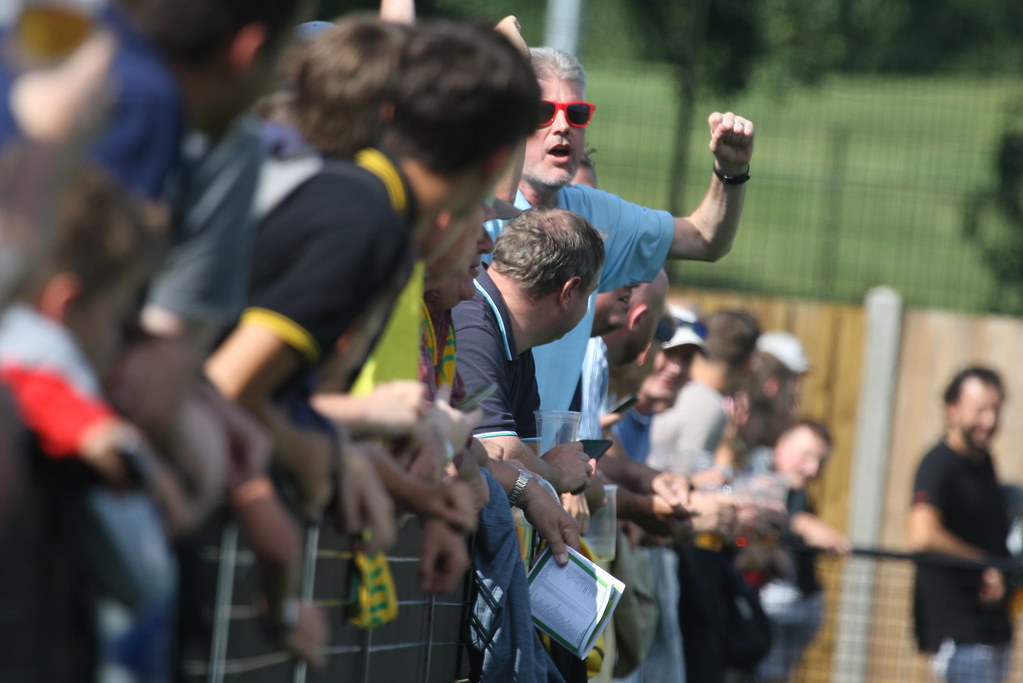