It’s been a long time coming. Eleven years in fact. Homeless since 2008, Horsham have had to groundshare since they vacated their old Queen Street ground including spending three seasons out of town at Worthing, and with the Sussex FA at Lancing, but at long last they were finally able to throw open the doors of their new ground as The Hornets took on Southern League Premier Division South side Hartley Wintney in a pre-season friendly.

As on the pitch, this was very much a test event for all connected at Horsham. Years of planning and countless hours have gone into making this day happen and while there will be a few snags to iron out, the supporters and those associated behind the scenes will simply have been delighted to enjoy a memorable occasion.

It was fitting then that, on the pitch, Horsham read the script. Against Hartley, Dom Di Paola’s side were in control of this contest from start to finish and they were set on their way just before the half hour mark when Dylan Merchant scored the first ever goal at the Camping World Community Stadium. However despite missing several good chances, Horsham went in level at the break when Tayo Obelayo bundled in from close range.

However two goals in quick succession in the early stages of the second half killed off the game and when Matt Drage saw red, seconds after seeing his side concede number four, it was merely an exhibition match.

Horsham came out of the traps quickest when, with just six minutes played, Harvey Sparks was played in and took on the shot from the angle, however he found only Sam Freeman who batted away with a decent block.

Two minutes later, Malachi Hudson was picked out inside the area, and after turning on the ball, he fired into the side netting. Veteran defender Joe Shelley then went close with a glancing header as he rose to meet a corner, yet Freeman got a glove to the ball to make another good save.

At the other end, Harley Wintney finally managed to drive at Horsham’s goal, with midfielder Josh Webb making history by becoming the first player to crash a ball on the roof of the clubhouse when he skied over from thirty yards out.

Horsham continued to ask the questions though, and on 27 minutes they had their lead. With the ball ping-ponging at the edge of the box, a nudge on Shelley was ignored by referee Ciaran Fidler and as the ball came out towards Merchant, the hero of last season’s play-off final made history by showing real composure to cushion down the ball and strike the ball as sweetly as you like on the half volley beyond Freeman.

The Hornets should have pushed on, yet failed to take their chances, and when Zak Newton was played clean onside with just Freeman to beat, two minutes later, the visiting shot-stopper rushed from his line and forced the Hornets midfielder into shooting early, and his effort went wide.

Hudson then rose high in an attempt to plant home Harry Mills’ superb cross, yet he somehow nodded over.

But The Row soon reminded Horsham that if you don’t take your chances, you get punished, and they did so by drawing level with seven minutes of the half remaining. Steve Duff’s low cross into the box was not dealt with and Tayo Obelayo swept in with a bundled shot.

Horsham again found only the side netting before the interval as Charlie Harris crashed a shot into it, while Newton again had another excellent chance to put Horsham back in front, as he sped beyond the last man and tried to fool Freeman with the ‘old switcheroo’ by switching feet, but he went wide.

There was no such wastage for The Hornets as the second half got underway, as they struck immediately. Once again, a killer pass unlocked the Hartley Wintney defence for Lee Harding to latch onto, and he unselfishly squared the ball for Newton to tuck home after nearly getting the ball stuck under his feet.

Minutes later The Hornets added goal number three. The impressive Hudson, who had worked hard, grabbed a deserved goal – somewhat fortunately – when his shot took a deflection to wrong foot Freeman and ruffle the netting.

The one way traffic continued, with Horsham able to cut Hartley’s defence with ease, and when Harding was again put through, thanks to another super pass to dissect the guests’ backline, the 328 strong crowd anticipated a fourth goal, only for the forward to take an unnecessarily extra touch and allow Freeman to make a brave save low down.

Horsham fans would indeed get to see a fourth goal from their side. If Hudson thought his first goal was slightly fortunate, his second most definitely was. With the striker falling down onto the ball inside the box and appearing to clearly handle as he got back to his feet, Mr. Fidler decided not to blow his whistle and allowed the game to continue, allowing Hudson the chance to score from six yards out. With frustration clearly getting the better of him, Matt Drage made it clear to the referee what he thought of the decision, and after getting booked for his troubles, the defender continued his expletive rant and got himself sent off.

A flurry of substitutions from both sides turned the dynamic of the game into a quieter affair as The Row looked to shore things up and limit the damage, but there was still time for a final chance with four minutes remaining when Sparks should have capped things off. Despite being two yards offside, the flag stayed down as Horsham again got the benefit of another dubious official decision, yet after hesitating with his shot, his unconvincing attempt was cleared off the line as a defender got back in time.

Horsham will now have the chance to make their ground home twice more next week, when we entertain Sussex rivals Haywards Heath Town – who we defeated in last season’s play-off semi-final – on Tuesday evening, while League 2 side Crawley Town pay us a visit next Saturday.

It’s good to be home! 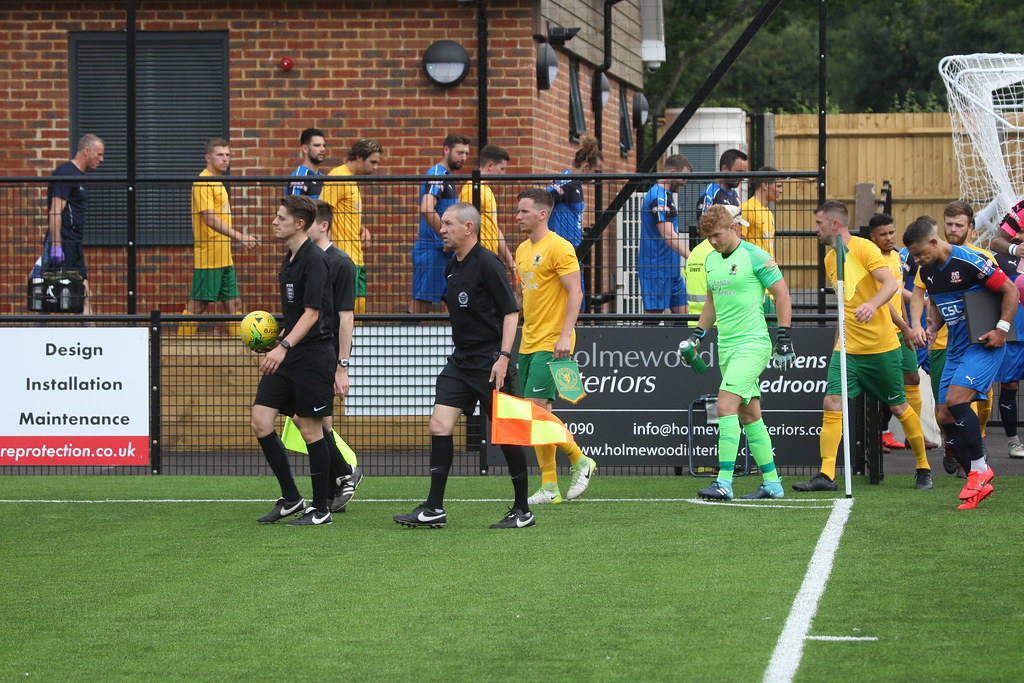