Horsham were able to continue their stay in the FA Cup, earning a bank holiday replay after a pulsating preliminary round tie against Deal Town ended in a 1-1 draw. A second half Jordan Clark header cancelled out the hosts’ earlier goal to prolong the Hornets’ stay in the competition for at least a few more days.

Having come off the victors of a 5-1 thrashing of Littlehampton Town just three days previous, the Hornets were in high spirits as they left Gorings Mead for the long trek to eastern Kent. Buoyed by the optimism of an unbeaten start to the season, players and fans alike were hopeful of grabbing the yellows’ first win in the home county since September 2012. However it wasn’t to be, as a resilient Deal side started the first half far brighter with Connor Coyne and Danny Smith finding the target multiple times inside the opening quarter of an hour. Horsham’s first real chance of the game came on the eighteenth minute as Darren Boswell almost set up Joe Shelley after he held the ball up well on the wing before lofting a perfect cross on to the head of his captain, whose header bounced off the bar and out for a goal kick. That would be the last action for Boswell as he picked up an injury, shortly after, making way for Shaun Charles.

Kieron Pamment was then bought down on the edge of the box on the 25th minute, with Charlie Dickens picking up a booking, and Pamment’s resulting free-kick almost produced the game’s opening goal as his stinging attempt was well blocked by Chris Waymark who got down well to keep out the shot. The remainder of the opening forty-five minutes was to be dominated by a physical Deal side whose composure on the ball was to be unmatched by the Hornets whose inaccurate passing was to be punished with what was almost the final kick of the half. After having a strong penalty appeal waved away when Pamment appeared to be bought down by Lee Scott, Horsham were to be undone as a poor kick from Gareth Williams was collected by Luke Bigginton who slipped the ball through to Andy Miller. He poked the ball further into the path of Connor Coyne who guided the ball past Williams to give the hoops a deserved lead heading into the break.

As the Hornets continued to struggle to grab a hold of the game, Deal pushed for a second and almost got the two goal cushion that they’d sought after when good strength by Miller resulted in a powerful shot being cleared off the line by Ashley Jones. Di Paola changed the team on the 55th minute as he bought on new signing Terry Dodd and Kevin Keehan for Niall O’Hagan and Brad Lewis and the substitutions appeared to inspire the yellows as they began to press further into Deal’s half.

A corner on the 65th minute revived the Hornets as they grabbed the equaliser. A wonderfully whipped in delivery by Pamment was headed home by the on-rushing Clark to spark scenes of wild celebration both on the pitch, and behind the goal. As the game entered its final fifteen minutes, debutant Dodd unbelievably spurned a gifted chance to put Horsham in front. Put through by Pamment to go one on one with the ‘keeper, and beating the offside trap, he smashed the ball over the bar and out of the ground from just sixteen yards where a placed pass into the net seemed to be the easier option. It was a huge let off for the hosts. It was then Dodd again, just a few minutes later, that could have put the visitors in front but an improved shot cruised just wide of the post. A nervy final five minutes ensued and, arguably, it was Deal who should have taken the lead as a free kick conceded by Jones on the edge of the box was wasted, and that proved to be the last action of the game as the referee called time on an exciting game in the furthest reaches of the Kent coast. 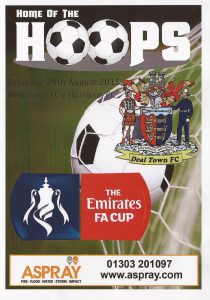