Horsham pulled off their biggest league win for over nine years when they thrashed a weakened Wingate by eight goals, in front of one of the smallest Queen Street crowds of the season. There was a much more positive look about the side, once they had taken the lead, but they started slowly on the churned-up pitch and both sides struggled to move the heavy ball. Horsham were too often caught in possession with feeble, short-passing efforts and when they did reach the penalty area they tended to fade out of have their delayed shots blocked.

Graham Langford was unfortunate to see an early ‘goal’ disallowed because Dave Owens was offside, and Wingate were also out of luck when centre-forward Cirosala hit the crossbar. But Horsham’s better football bore fruit after half an hour when Owens slipped a fine pass through to Keith Wellham, who easily beat the ‘keeper, and Peter Dave added a second just before the interval when he slammed home a nicely-judged pass from Russell Penticost.

There was only one team in it in the second half and, most of the time, Wingate were pinned in their own half. Penticost missed a ‘sitter’ after a fine run and pass by Wellham but there would be no denying Langford who scored the third when he slid through the mud to force home another Wellham ‘assist’. Five minutes later, Langford nodded the ball down for Penticost to score, and then it was John Gregory’s turn to miss an easy one when he skied his shot from another Wellham prompt.

Penticost, Owens and Gregory then came together in a superb move for Wellham to put a quick shot just wide but Penticost took his opportunity weel to move the score on to five as the defence waited for an offside whistle that never came. Straight from the restart, Wellham raced down the left for Langford to net his second.

The effect of Horsham’s increasing domination showed when the Wingate goalkeeper did not bother to move towards a Wellham free-kick that was only inches wide. But he could do nothing about a close range Gregory shot for the seventh goal, following a thrilling break by Wellham in which he beat three defenders before reverse-passing from the line. John Grant came up near the end to force home an Owens shot that could well have found its own way into the net for the final goal. 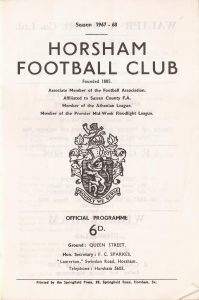 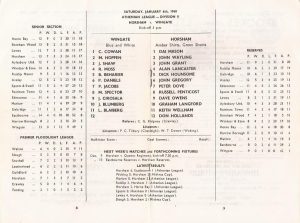