Although the 1,300 Good Friday crowd at Queen-street did not see a particularly impressive game, this opening holiday fixture was Horsham’s all the way. The ﬁrst half was completely theirs, and they had their fair share of play in the second half. They also had more than their share of missed goals, and Johnny Elphick, in particular, had an off-day. Outstanding for Horsham was Roger Christmas, who replaced Roy Scutt at right-half. He seemed to be everywhere at once and always made good use of the ball after he had won a tackle. Horsham’s close passing game did not work, but when they did start swinging the ball about, the West Ham defence was usually wide open.

After twenty minutes Elphick broke through on the left-wing and made a quick dash goalwards. There was only one forward in the middle to receive his pass, but Oliver Coldman carefully placed the ball into the corner of the net. In the second half West Ham had more of the play and in the sixty-ﬁfth minute their right-half Standley had Ernie Manouch well beaten with a neatly placed header from a right-wing corner. It looked as though a draw was to be the result, but three minutes from the end centre-half John Browning moved up the right and shot towards the goal. Coldman intercepted the ball and hit it hard as it went by and the West Ham goalkeeper did not have a chance. 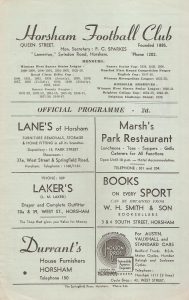