It was a brave try, but not once during the ninety minutes of this FA Cup tie were Horsham on top. And the simple explanation was that they were completely outclassed. The defence held for nearly twenty minutes and then Hastings were through and for the rest of the match they pounded the Horsham goal without mercy. It was only a magniﬁcent display from Ernie Manouch in goal which prevented United from rattling up double ﬁgures and he was helped no end by Nobby Cobb; the sturdy inside-left was always there in the defence when he was needed and was responsible for many clearances.

Hastings seemed to toy with Horsham before their first goal although several fast shots were safely dealt with by Manouch and, on one occasion, Parks seemed to have the goal at his mercy but the goalkeeper ﬂung himself sideways to ﬁst away. The Hastings forwards continued to attack with monotonous regularity and in the nineteenth minute Manouch was well beaten when Eric Phoenix cracked home a pass from Parks. In one of the few Horsham raids, Cobb shot well from the left but goalkeeper Ball gathered safely. This was followed up by a move involving Johnny Elphick and John Browning which should have produced a goal, but the unmarked Browning shot wide after collecting the centre-forward’s pass. Just on half-time Roger Christmas tried to pull down a high ball in front of the Horsham goal, but he failed to trap it and the ball rolled loose to Hillman who passed to Asher to crash home Hastings’ second.

After the interval it was all Hastings and Phoenix put his side further ahead within half a minute of the kick-off. Right-winger Hillman provided the cross for the inside-right to head in and, ﬁve minutes later, another cross from Hillman was converted by left-winger Girling who ran in to ﬂick the ball home. Horsham’s consolation goal came after David Green was fouled and Maurice Watts scored from the penalty spot. 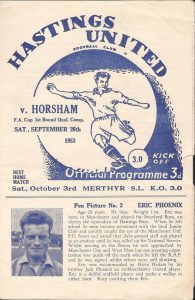