With the start of the Euros less than a week away, we are excited to announce the signing of a player who knows just what it takes to win the tournament.

Sam Howes was juggling studying for his GCSEs and playing for England during the 2014 Euro U17s finals in Malta, alongside the likes of Liverpool’s Joe Gomez and Bournemouth pair Lewis Cook and Dominic Solanke. And although we can’t admit to knowing the results of his academic pursuits, Sam passed with flying colours on the football pitch when he and his team-mates produced a penalty shoot-out victory over the Netherlands to be crowned European champions for a second time.

Although only making the bench that night, that success is among the highlights of an impressive career for the young goalkeeper, who also went on to play for the Three Lions at U19 level while on the books of West Ham United for whom he made made his senior bow during a trip to New Zealand in 2014. But despite being named in the East Londoners’ first team squad for an FA Cup tie at Anfield in 2016, and voted ‘Young Hammer of the Year’ when just 16 years of age, he found himself surplus to requirements in 2017 and subsequently spent two years at Watford before making the switch to Woking.

Still just 23 years old, his talents have seen him in big demand on the non-league circuit with Wealdstone, Hampton & Richmond, Eastbourne Borough and Chelmsford City all stopping-off points on route to joining Dorking Wanderers for the 2020/21 season and helping them to top spot in the National League South before the season was cancelled.

With such an impressive CV, it is little wonder that Dom Di Paola is still pinching himself at landing the talented young ‘keeper.

“I’m amazed we’ve got him in. He’s had a couple of bad seasons in terms of playing time and just wants to get himself back up to the level he knows he can play. It sounds weird but I’d be really keen to see him get himself a move somewhere after a few seasons and go and play at a higher level because I think he’s got the capabilities to play at least two leagues higher.

“He just needs to get the enjoyment back in his game and get his confidence back because he’s a little low in terms of how he feels in his football at the moment. We can help with that because we’ve had lots of boys like that. Most of the lads who have signed for us down the years are because it’s not worked out somewhere else.”

Despite dropping a division to join the Hornets, Sam believes it is only a matter of time before he – and his new club – can begin climbing up the footballing pyramid.

“It’s been spoken about in the week by the other players who have joined that Horsham is an ambitious club” he said. “The facilities are second to none and the manager’s ambition as well to push up the league, and even looking at promotion, I think is a realistic target for this year. That’s what drew me to the club.

“I also know a few of the lads down here anyway and they’ve always spoken really highly of the set-up here so it was a no-brainer for me. I’ve been fortunate because I know (goalkeeping coach) Stuart Owens really well and I’ve been down here to train on and off for the last couple of years and that’s no secret to the boys who have been here.

“I played against Horsham in a friendly last year so I’ve seen it first hand from an opposition perspective and it was good just to see the way Dom wants his teams to play, which I think is quite exciting. He wants us to play in the right areas but also be attacking and look to counter teams and play through them as well.

“At Dorking I had to share the goalkeeping role with Slav Huk. When Slav was playing, I was second to him of course as obviously only one ‘keeper can play but we always supported each other well so it never felt like he was number one or I was number one. It was more like whoever put on the shirt, one of them had to do the role of playing, the other had to do the role of supporting them. Slav’s been there for years as well so actually for me, to get as many games as I did, it was good, but now it’s time to move on to the next stage and as I’ve lived in East Grinstead all my life, I know this area really well.

“I was at Palace as a youth lad for two years before moving on to West Ham and spent most of my academy time there, around 9-10 years, then moved from West Ham to Watford. Then from Watford I eventually ventured into non-league with Woking which didn’t quite work out the way I wanted it to work out, which sometimes happens in football. Then Dorking last year, and now I’m down here I’m relishing the challenge to really kick on again.” 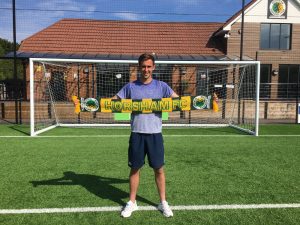 On the experience of being involved in that Anfield cup tie, Sam added “I can’t put into words to be honest. I didn’t know anything about it because I was in a meeting that morning and Adrian at the time was supposed to be on the bench.

“His wife went into labour the night we flew up there so when I came down in the morning and saw the teamsheet on the board, I saw my name and it was like ‘wow’. I was quite fortunate to have those experiences quite a few times at West Ham, especially with that season being the last one at Upton Park. It was quite a memorable season for me and for the club as well.

“I was on the bench around nine or ten times but was in the squad for the majority of the time anyway as third-choice ‘keeper so I was always there or thereabouts and always travelling with them to experience that first team environment.

“Although I like to keep my long-term aim close to my chest, the main objective for me now is just to play football. The last two years I haven’t played as much as I probably would have liked and this move gives me an opportunity now where I can come in and play regular football, which is what I needed. It’s quite fortunate that Dom’s giving me that chance to do so at a good club.

“But if it’s one season or if it’s ten seasons, I can tell you one thing: I will give my all for this club and you won’t expect or get anything less than 100% for sure. There’s not a big deal looking up the ladder, thinking in six years time I want to play for England, for me the main aim is turning out on a Saturday at 3pm and just enjoying playing football again because I find that when I’m enjoying my football, I play better.

“As a collective aim, there’s no reason why we can’t challenge this year and look up the table rather than down. You see the fanbase, there’s obviously a good following here, and so if everyone sticks together, who knows where we may be in April next year.”

And so say all of us, Sam. We’re sure all our supporters will share our hopes that you enjoy a long and successful career with the Hornets.

Sam was speaking to Matt Jones