Dom Di Paola’s side will be looking to record their first win of the 2020/21 Isthmian League Premier campaign as we welcome Enfield Town to The Camping World Community Stadium tomorrow night.

The Towners, formed in 2001 as a fan-led breakaway from the original Enfield FC, have had a decent start to the season recording two wins from three games, including a 4-1 thumping of Lewes on the opening day.

One of a number of home games which were cancelled due to Coronavirus last year, the visitors will also be looking for some revenge for last season when we put four past them in their own backyard to record our first Isthmian Premier win in seven years.

A 4-1 scoreline appears to be Enfield’s default at the moment, with their most recent game ending in a 4-1 defeat to Bishop’s Stortford, with Town currently occupying sixth place in the table.

With their weekend game postponed, the North Londoners will have had a whole week’s rest before kick-off tomorrow, in comparison to the Hornets who will be playing their second of four games in ten days.

After a disappointing FA Cup exit to Havant and Waterlooville on Sunday, the Hornets are in for a quick turnaround with trips to Wingate & Finchley and Carshalton Athletic both still to come in the next week.

Therefore, keeping match fitness will play a crucial part to a squad already struggling with injuries to key players.

Charlie Coppola, Eddie Dsane, Jack Brivio and Kieran Monlouis remain sidelined however it appears there is some light at the end of the tunnel.

Having played the full 90 minutes against Havant, JJ O’Sullivan should be fit again while Gary Charman could also feature, after coming on as a second half substitute in the same game.

Doug Tuck is another who could make a re-appearance following a two-week spell sidelined with a hamstring injury, while Lewis Taylor should also be available after completing his one-game suspension.

Our thanks go to the Horsham FC committee who are tomorrow’s matchday sponsor.

Tickets are still on sale for this game with supporters from both sides able to buy their tickets in advance, through our online ticketing service. However, a limited number of tickets will be available on the gate.

We are also pleased to confirm that our WiFi is back up and running, meaning we can now once again process all card payments.

We advise supporters to pay for food, drink and other in-stadium purchases with contactless card as much as possible, to avoid potential COVID-19 transmission. However we will still be accepting cash, if you are unable to pay by any other method.

A reminder that face coverings MUST be worn at all times inside the clubhouse, unless you are exempt on medical grounds. Our full COVID-19 guidance is broken down in this helpful graphic below. 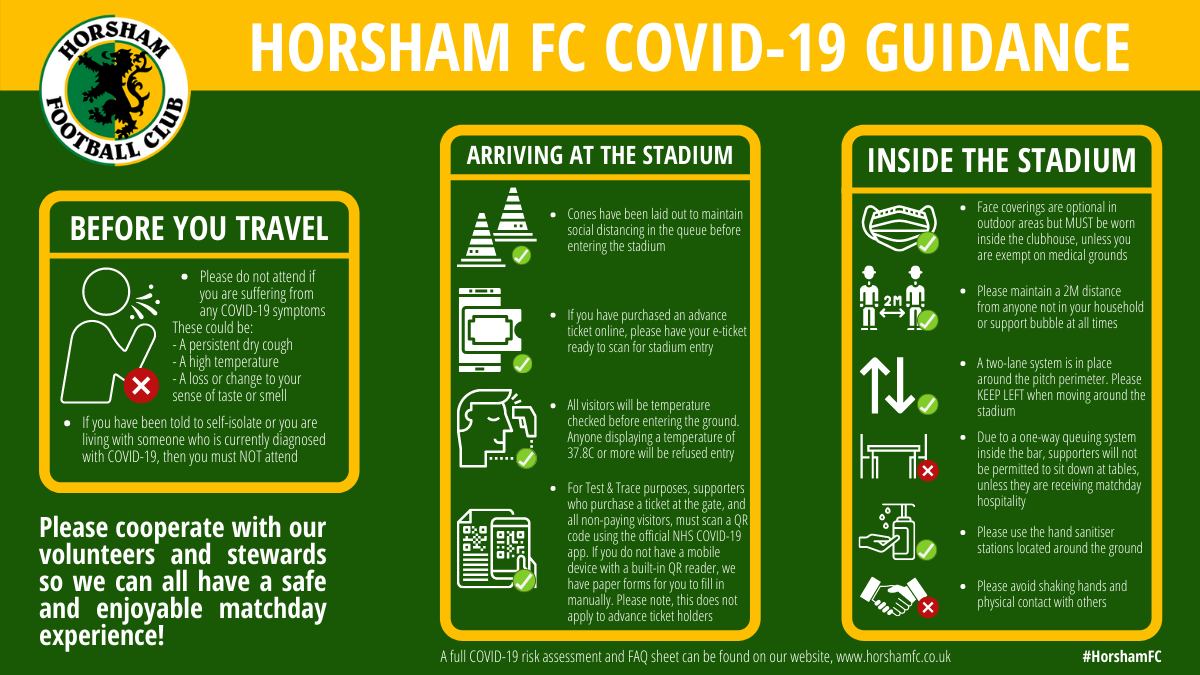